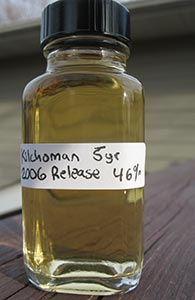 Kilchoman, as everyone knows, is the recently opened, eighth distillery on Islay. They are a small farm operation that produces peated whisky, all of which that I have tasted is of a very high quality and shockingly good for whisky this young–this 5 yo was at the time of release the oldest whisky from the distillery. [Edit: See the comments below]–and the resulting malt while smoky is not defined by heavy smoke. Prices are high relative to age, but I am willing to give them a pass on this because a) their production volume is very low, which means low economies of scale and b) as a small, independent distillery they need to generate cash till their maturing spirit reaches a higher age. I hope that when it does the Kilchoman 10 or 12 or whatever it ends up being will be priced fairly.

Nose: There’s no mistaking the smoke but it’s accompanied by green fruit and buttery vanilla. Quite a lot of brine too after that and green olives in olive oil. The smoke is phenolic but not bitter. Quite reminiscent of Caol Ila and some slightly older young Laphroaigs. The smoke recedes a little after some time. With water there is some bitterness–but it’s the kind of bitterness you get from pithy lemon zest; and yes, there’s clearly some lemon now.

Palate: Blank for about half a beat and then leafy smoke envelops the tongue. Brine and salt crystals come poking out from under it but where’s the fruit? And the texture is a little more watery than I was expecting from the nose. Gets more medicinal (gauze) and a little waxy on the second sip but still no fruit as such, unless you count a chilli pepperiness/capsaicin as fruit. After a while some lemon begins to emerge but not a whole lot. As on the nose, water pulls it out and now it’s quite a bit brighter with some musky notes on the tail end. Oddly, the texture gets less thin with water (for people who understand chemistry this may not be odd at all, I suppose).

Comments: Very nice, but not quite a world-beater yet. Not at 46% at any rate. I have to say that the cask strength 3 yo for Binny’s from a couple of years ago was better despite being two years younger. And despite what I said at top about the ppm being lower than most peated Islays and their malt not being defined by heavy smoke this packs quite a smoky wallop. But that will doubtless recede with age. Water is needed to release the lemon fully.