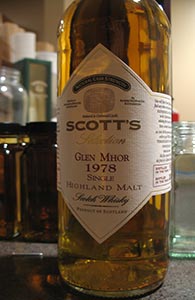 Glen Mhor is a closed distillery from the Highlands that is not very well known outside of the geekiest of whisky geek circles. I am quite far from those circles and have little knowledge of this distillery. Indeed, it’s only recently that I learned that the Mhor part of the name is pronounced “Vhar”. Accordingly, I will send you off to Malt Madness to read about it. I can also say nothing about my previous experience with Glen Mhor’s whisky as this is my very first encounter with it (there is very little of it on the market, especially in the US). And so I have no preconceived notions about this whisky in general; and as there are no reviews of this particular bottle out there that I can find I have no idea what to expect from it either.

This situation–that of no reviews being available–is shared by a number of Scott’s Selection’s early-mid 2000s releases, many of which are still available in the US. I have long been tempted by many of them as the prices are usually reasonable enough (and I’ve had other good experiences with Scott’s Selection) but have always been too nervous to take the plunge. Recently, however, some friends and I split a number of these bottles–thus limiting our exposure to risk–and so at least one review of some of them will be available soon.

Nose: Quite clearly sherried with caramel, orange peel and hints of toffee making the first impression. Then there’s brine, toasted wood and light smoke. With time the brine is the main story, and there might be just a touch of gunpowder too. With more time the fruit picks up again, and now there’s some apricot with the light orange peel. Some honey too and the toasted wood is right behind it. A few drops of water push the wood back and amplify the fruit–there might be a hint of peach in there now too.

Palate: Starts out with a sour woodiness that turns citrussy and then woody again. Not particularly astringent though. Very drinkable at full strength. With time the citrus is clearly oranges and there’s actually some orange juice (not just peel; and make that bitter oranges); just as I type that the next sip is more lemony. Yes, this gets more and more lemony with time, and the wood gets a little dustier. Okay, let’s see what water does. As on the nose, water pushes the wood back and it’s now all citrus, all the time.

Finish: Medium. The citrussy/woody sourness turns to brine and the sherry separates just a tad (a hint of blood in the mouth). The finish gets longer with water and the wood gets dialed back here too.

Comments: I liked the nose the most, where I thought it was quite reminiscent of Highland Park. I found the palate to be more interesting than pleasurable at first: the dominant note was the sour woodiness but it wasn’t tannic or astringent in any way and not really an off note. With water the wood receded and it became more pleasant in some ways but also more conventional. I do think water does it good. And, on the whole, while I’m very glad to have tried a whisky from this extinct (and demolished) distillery, I think I’m fine with only having bought a quarter of this bottle. It’s good but nothing special. So, are there any other Glen Mhors in the US that people would recommend?