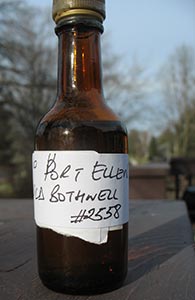 Another Port Ellen from the early Old Bothwell releases of a few years ago. This one is from 1982, the year before the distillery closed for good. I do wonder if anyone has cracked the mystery of how it is that Old Bothwell happened to have all these casks and why it is we don’t see anything else from them. Did Diageo have them whacked? Anyway. Let’s get right to it.

Nose: As with cask 220 this is not particularly smoky. There’s lemon here too but it’s both muskier and more bitter; and there’s more olive (oil-marinated Kalamata) and pencil lead/graphite. A similar almondiness. A little more sweetness after a while but it’s minerally and almondy. Greater saltiness after a while, and some tart apple here too (reminds me of a variety we get here in Minnesota called Haralson). Gets almost creamy with time. With water the lemon gets really musky/preserved and everything comes together nicely.

Palate: Minerally peat and then a big burst of lemon–much brighter than on the nose. Unlike #220 this one doesn’t send a wave of smoke crashing in after the lemon. It’s not that there’s no smoke at all, it’s that the smoke is more of an accent on the lemon. There’s a little more sweetness here too. Water intensifies the lemon, bring a lot of salt to the party and also more smoke.

Finish: Long. Lemony. No expanding smoke here either. But there is a growing sootiness. With water the soot turns to smoke, acidic smoke, and the salt hangs around as well.

Comments: Now this is very Caol Ila. I really think I am going to stop feeling bad about not being able to ever afford another bottle of Port Ellen again. It is very good though and better with water, I thought. With water and without I liked the nose a lot more than the palate, which seemed a little simple by comparison to me.

Thanks to Steven R. for the sample!