Once upon a time if you wanted to go out to eat in Delhi your options in terms of cuisines were Punjabi/Mughlai (the kind of stuff that’s on offer in most dire Indian restaurants in the West), Chinese or South Indian vegetarian food of the idli-dosa-vada variety. There were the odd exceptions, of course, but by and large this was the restaurant scene. Well, unless you had a lot of money to spend to eat dodgy “continental” food in five star hotel restaurants. At the time that I left Delhi for graduate school in the US in 1993 this was slowly beginning to shift and twenty years on the situation is completely different. I don’t really want to go into all that in this post as it would take a lot of time–I may devote a separate post in the coming week to a broader, impressionistic survey of the changes I’ve seen in Delhi on regular trips “home” over the last twenty years. For now, here’s a review of a meal at a Bengali restaurant, Oh Calcutta (in Nehru Place behind the Intercontinental hotel).

Oh Calcutta is the snazziest of the traditional Bengali restaurants that sprang up in Calcutta/Kolkata in the last decade and a bit more. It’s never been my favourite place to eat at in Cal (I preferred Kewpie’s and Bhojohori Manna–caveat: I haven’t been to Cal since 2007 and have no idea what the current state of these restaurants is) but the original there is not bad by any means–at any rate, it’s the only one of those traditional Bengali restaurants that’s gone national in a big way, with outposts in Bombay/Mumbai, Hyderabad, Bangalore and Delhi (with another in Gurgaon); there’s even one in Dhaka.

On our trips to Delhi eating out is both for the sake of eating out and for the purpose of meeting up with old friends; and so we always end up at Oh Calcutta at least once, as for my non-Bengali friends it’s a far more exotic option. They serve old-school Bengali Hindu food (the stuff that usually gets to skip the religious qualifier), Bengali Muslim food as well as occasional Anglo-Indian fare from the days of British colonialism (Bengalis, by and large, are unrepentant anglophiles). In other words, there’s enough stuff there that my mother and aunts don’t make (our family is Bengali) and so I’m always happy to eat there. It’s not the only Bengali show in town but it seems to still be dominant.

What we ate this time (click on the thumbnails to launch a larger slideshow with captions/details):

Chholar dal is usually the special occasion Bengali dal, as its flavour and texture makes it very suitable for more robust recipes (dals eaten every day tend to be much lighter). This was fine; I make better, as I expect every Bengali cook worth her or his salt does.

Mocha (“ch” as in “choose”) is the Bengali name for the banana blossom or flower. A ghonto is a type of preparation in which veg (usually) is cooked down. Mocha is a bit of a pain to prep at home so it’s not something you’ll see cooked these days in non-traditional homes; it was rarely cooked in our home growing up as my mother worked. Anyway, the version at Oh Calcutta is rather nice.

This is a Bengali Muslim style chicken biryani; really an offshoot of the old Awadhi style–I’m not really equipped to go into the historical reasons for this in great detail (and am away from my books) and so will say only that it is a much lighter style of biryani than those accustomed to the dish as served in Indian restaurants in the US might expect and really shows off the aroma of the rice scented with cinnamon etc. and the meat that is cooked along with the rice. I don’t normally believe in chicken biryani–but we got it with chicken so that the boys would have something to eat. This was quite good nevertheless–or it may be the case that we overrated it a bit as it was the first biryani we ate on this trip (the disasters served in restaurants in the US are an insult to this great dish and I crave it terribly on trips home).

Pointless close-up of the biryani, removed from the pot and mixed up.

The laccha paratha is alayered paratha, also of Bengali Muslim provenance. This is not a very good iteration.

Also of Bengali muslim provenance, a rezala is a dish in which the meat (goat or chicken) is braised in a “white” sauce of ground onions and ginger (and other spices). This was quite nice, but rather heavy.

Bhetki, a type of Barramundi, is very popular in Bengal (Maach just means fish). Paturi refers to dishes steamed in banana/plantain leaf parcels. This sort of preparation is very common in eastern India (and probably elsewhere in India too) just as it is in other parts of East Asia. Oh Calcutta’s version is not bad but they only steam the fish with a piquant mustard paste which makes it kind of one-dimensional. Just a day before we’d had the version made by one of my aunts (an incredible cook) and her version which includes shredded coconut caused this one to pale in close proximity/comparison.

The contents of the paturi.

Chingri Maach=prawns/shrimp/related crustaceans; and malai curry refers to a preparation featuring coconut cream (malai)–there’s also a school of thought that holds that “malai” may refer to “Malay”. Anyway, we only got this because they were out of the Daab Chingri, a preparation of shrimp cooked with and served in a green coconut. Not bad at all. 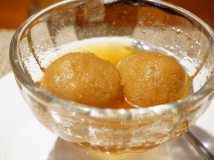 And so we come inevitably to mishti (sweets). The Bengali sweet tooth is legendary (only people from certain parts of Gujarat can compete) and most Bengali sweets are acquired tastes for people who can’t handle extreme sweetness. This is a twist on the classic roshogulla (one of the iconic aspects of Bengali culture) made with Nolen gur, a famous type of date jaggery.

A sort of lethal crepe, ownership of the malpua is claimed in a lot of Indian states. 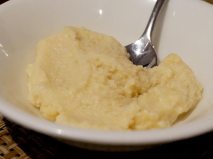 Served with the malpua in this case, rabdi is basically thickened cream. Again, not a uniquely Bengali thing. 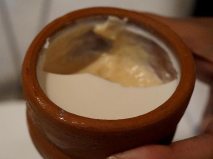 Another iconic Bengali dessert, mishti doi is rich yoghurt sweetened with jaggery, and served traditionally here in an earthen pot.

On the whole, a nice meal—the desserts were all very good. Not everything was great or even very good, but the non-Bengali may be less nitpicky. Certainly, if anything this good were available anywhere near me in the US I’d be very happy. In the meantime, while I don’t think eating at Oh Calcutta is essential for anyone who has access to meals in traditional Bengali homes, people interested in the variety of Indian cuisines who do not have that access should certainly seek it out in Delhi. In Cal there are lots of alternatives. Not a cheap meal, but I couldn’t tell you how much it cost as I was not allowed to touch the bill.

Next up: an acceptable Hyderabadi meal.