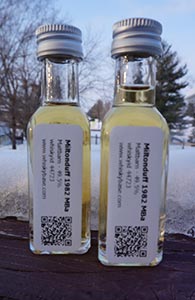 And after yesterday’s 23 yo Miltonduff here is an even older one. This one is stated as being from a sherry cask. It was bottled by Maltbarn and I’m hoping it is better than their Glenrothes 1990 that I reviewed last week. With a 63 bottle outturn the cask was obviously split with someone else. Let’s get right to it.

Nose: Not much evidence of sherry, at first anyway. Instead there’s some musky fruit with hints of gasoline and some creamy vanilla. No real development. And not with water either.

Palate: Very much as on the nose except sans the gasoline, and with some minerally notes in its place. That musky lime is more fresh and effervescent here. Gets a little more bitter (lime zest) on the second sip and there’s also some sweetness on the tail. Not much change after that. Let’s add some water. No, that doesn’t do much good–more than a little soapiness emerges. Maybe a hint of tropical fruit at the very end.

Finish: Long. That combination of the bitter lime zest with the sugary edge lingers and edges into some musky malt as it fades out. Not much wood at all. The bitterness gets soapy on the finish as well.

Comments: There’s very little sherry character here–must have been a very tired cask. Don’t get me wrong, while this isn’t anything great, far from it, it’s quite drinkable. But it doesn’t taste particularly old and, indeed, is my least favourite of the four I’ve had. Still, even though this drags down the average of the four I’ve had so far I’d still say that the low reputation of the distillery seems outdated. A very clear through line between the four I’ve had so far, by the way: musky lime, maltiness, a lightly bitter edge.