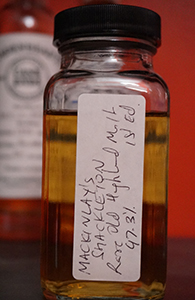 At this point everyone knows the story: Shackleton and co. left some whisky behind in the Kalahari sometime between 1907 and 1909 while looking for King Solomon’s Mines; this whisky was unearthed a couple of years ago; our Lord and Saviour, Richard Paterson took one look at it and then blew his magic nose into a loch and yea and verily did the water turn into Shackleton’s old school whisky. And then he skied across it, towed by the Loch Ness monster while choirs of cherubs sang hosanna. Or something like that–I’m fuzzy on the details.

I like to refer to it as the Shackleton Zombie Malt but that’s, of course, not true. The true Zombie Malt is not available for purchase; this is in fact a clone. In my experience, mostly derived from the movies, nothing good ever comes of cloning but I keep an open mind. I believe all kinds of old whisky went into the creation of this replica–there’s some irony there as the original was very likely composed of very young whisky (no one was drinking old whisky at the turn of the 20th century).

Hilarious jokes aside, this is a whisky I was in fact very interested in at release but couldn’t bring myself to pay the asking price. Thanks to the generosity of a good friend’s brother I now have a large’ish sample of it. Let’s get to it.

Nose: Faintly rubbery smoke at first and a minerally, sooty quality. Some olive brine below that and something lightly savoury too (ham?). Some fruit as well–apples, tart at first but sweeter as it sits and also a little creamier. The rubberiness disappears after a minute, by the way, but there’s a sour aspect to the smoke that remains. And the smoke gets more expansive as it sits (not phenolic though) and if you let it sit a while it gets really lemony (salted lemons). More of the same with water, except the smoke is maybe more ashy now.

Palate: Very much as on the nose with a minerally, sooty quality. But it expands quite dramatically on the palate, getting smokier with a strong burst of lemon and pepper accompanying. More pepper on the second and third sip and also ashy smoke and some wet stones. Water brings out some of the sweeter fruit on the palate and pushes the lemon and the pepper back. More balanced now, but I think I preferred it without water.

Finish: Long. No new development as such but the smoke and pepper linger. Saltier with time and the lemon begins to linger as well. Less lemon on the finish too with water.

Comments: The quality of the smoke here is very reminiscent of that in some mildly peated Highland malts from the 70s I’ve had such as this Ardmore–I assume there’s a lot of that sort of whisky in here. I have no idea, of course, if this is identical to the original Shackleton malt or a reasonable approximation of what malts of that era (more than 100 years ago!) were like, but I have to say that it doesn’t taste radically different from malts made in the 70s or even some contemporary Longrows. Very nice indeed. Not overly complex, and probably not a crowd-pleaser, but old-school whisky for sure.

Thanks to the Freeman brothers, Jeff for sharing, and Alex for carting it back to Minnesota. (Just in case, anyone’s wondering: these are not the Jeff and Alex who comment here from time to time.)