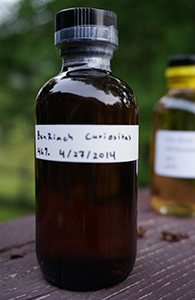 One of the younger entries in Benriach’s series of peated whiskies with silly Latin names, the Curiositas is one I’ve had my eye on for a long time but never been able to bring myself to buy. Thanks to a sample trade I finally get to check it out. This is a 10 yo from bourbon casks (I believe). I was not overly enamoured of its older sibling, the Septendecim but I did quite like the Solstice 2nd. Ed.. Let’s see what this one is like.

Nose: Dry, farmy peat–a lot of it. Heavier phenolic notes lie below the farmy/organic notes and there’s a fair bit of salt as well. Some lime too and after a while there’s some sweeter fruit. The peat becomes less insistent (or perhaps my nose adjusts) and now there’s some light pastry/vanilla. With time it’s a nice melange of lime, salt, stony sweetness, mild smoke and vanilla. A few drops of water really emphasize the lime and pull out some more farmy smoke, but it’s integrated nicely with the lime.

Palate: Starts out sweeter on the palate and then a big cloud of dry smoke arrives, bringing acid/citrus with it. Turns sweet again as I swallow but there’s no real distinct flavour to the sweetness. The mouthfeel is a little thin. The smoke is more tarry on the second sip and there’s some bitter wood char too. Less sweetness on subsequent sips and more lime. Ashier with water and also more acidic, at least at first; gets a bit sweeter but it’s an odd artificial sweetness.

Finish: Longer than expected. The sweetness and the smoke (more ashy than farmy now) marry and linger for a while and the salt pops back out as well. Sharper smoke with water.

Comments: I enjoyed the nose more than the palate, and I enjoyed both more neat. On the whole, this is not bad, but I don’t think I need a bottle. This is mostly because dry and farmy is not really my favourite flavour of peat and for the price I am happy to stick with the young Islays I enjoy so much (it’s in the same price range as the Laphroaig 10 and the Ardbeg 10). And I didn’t like this as much as the Septendecim either–it’s better value for money than that one was though.

Thanks to Jordan D. for the sample!