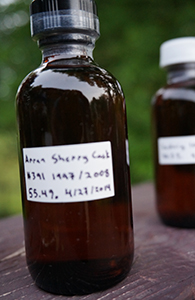 The last Arran I reviewed was a single bourbon cask from 1998, and I quite liked that one. This is a sherry cask from 1997 and it may be the first sherried Arran I’ve ever had (I’ve not had very much from this distillery). I’m curious to see if I will be able to see any family resemblance beneath the sherry. Let’s get right to it.

Nose: Quite clearly sherried but not a sherry bomb. Mild raisins and a lot of citrus–starts out with oranges but then there’s rapidly intensifying lemon and lime zest and quite a lot of salt. Something mildly grassy too. As it settles down the rounder, sweeter aromas (some brown sugar too now) re-establish under the brighter, zestier notes but those notes are still very present. The salt all but disappears. With more time the fruit is muskier (or maybe that’s malt) and there’s some caramel and honey too. Water pulls out sweet vanilla.

Palate: Starts out with the citrus zing (lime zest again) but it’s followed very quickly by sweeter notes–simple syrup first and then a maltier note. Transitions back to citrus as I work it around my palate. The mouthfeel is a little thinner than expected. There’s a grassier note on subsequent sips. Okay, let’s see what water does. Well, it makes it sweeter (and maltier) and makes the citrus muskier but the grassy note gets sharper too.

Finish: Long. The lime zest takes a long time to fade out and it gets a bit peppery and there’s some woody bite too as it goes. More sweetness with water but the tingling lime is still there.

Comments: Apart from the initial notes on the nose there’s nothing about this that screams “single sherry cask”. I’d guess it’s from American oak and that the wood has contributed more than the previous contents of the cask. And I definitely see a strong family resemblance to the few other Arrans I’ve had.

Interestingly, Jordan, who I got this sample from, does not mention citrus at all in his review. I’m happy to note that Michael K., who seems to have got a sample from the same bottle, does mention citrus in his review–but I didn’t really get the milk chocolate they both emphasized. Is my palate off? Or is this an artifact of my review coming from a sample taken much later in the life of the bottle? Must ask Jordan if he gets/got more citrus later in the bottle’s life too.

Thanks to Jordan D. for the sample!