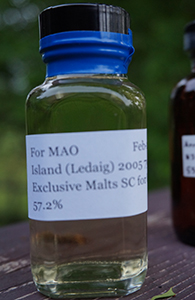 The run of reviews of smoky whiskies is threatening to become a run of reviews of Ledaig. Well, this one from David Stirk’s Exclusive Malts at least doesn’t say Ledaig on the bottle. It says “Island Distillery” but it has all but explicitly been confirmed that this is a Ledaig. This was an exclusive bottling for my old pals at K&L. Let’s see what it does to my fairly positive streak with Ledaig.

Nose: Ah yes, the familiar farmy/organic peat. There’s a fair bit of vanilla sweetness with it though along with some salt and lemon and a bit of rubber/vinyl. After a few minutes the vanilla sweetness eases into a creamier, butter-pastry kind of thing, and I’m getting some sort of baked fruit as well (apple maybe?). With even more time (10-15 minutes in) the farmy/organic peat is still there but more muted and in better balance with the other notes. Water pushes back the smoke and accentuates the lemon and the sweetness (stony now as it was on the palate).

Palate: Leads with sweet notes (simple syrup) and some lemon and then there comes the smoke–more ashy than farmy on the palate. Tastes pretty hot. Another sip or two and I’ll add some water. The smoke is much more forward, and more acrid, on the second sip. The lemon’ still here and gets ashier and more pronounced on the third sip with some stony sweetness. As on the nose with water, with the smoke muted, but there’s a little more tarry bitterness here.

Finish: Long. The smoke is ashy and there’s a stony sweetness and also something charred (what exactly, I’m not sure). Some plastic too. The bitterness that emerged on the palate with water continues into the finish.

Comments: There’s a lot going on in this whisky but it all feels more jumbled than like a complex progression. It’s interesting and entertaining enough but didn’t really hit very many highs for me. And I liked it better neat.