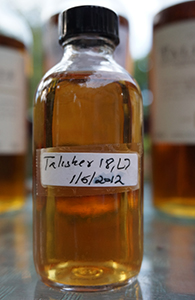 I purchased the bottle of Talisker 18 that this came from when I first moved to Minnesota in 2007. At the time it was available for $49.99 at a store in Minneapolis that was well-known for very low prices on a surprisingly decent selection of whisky. (Alas, in recent years that selection has shrunk and the prices have risen.) At the time I didn’t pay any attention to the doings of the industry or to prices in general and so failed to stock up big time. By the time I finished the last of the bottles I’d bought (this one) the Talisker 18 had become scarcer and its price had risen quite sharply (close to $80 in most markets). And then a couple of years ago Diageo dropped the boom on us by raising the price even more dramatically ($140 in most markets). As to whether this was due to dwindling older stock and/or because they want to premiumize 18 yo whisky (a la Macallan) while releasing more NAS whisky at prices that seem comparatively much cheaper but are much higher than they should be (see the new Storm, Dark Storm and Port Ruighe) I don’t know but I suspect the latter. At any rate, as much as I like the Talisker 18 I’m not about to pay $140 for it, and so I’m pleased to see recent signs that the price may be dropping (a sign possibly that lots of other consumers feel the same way).

Anyway, this is a sample from a bottle from a more innocent time. (Though if you look around online you’ll see people complaining about changes in Talisker even back in 2007.)

Nose: A bit of salt, a touch of gunpowder and a lot of apricot. Orange peel below the apricot and some honey too. Below all of that lurks some pepper and a bit of minerally peat. The peat expands as it sits (nothing phenolic though) as does the salt. With even more time there’s some sweeter fruit with the apricot and orange peel–I want to say peach. The citrus gets brighter (closer to lemon) with time and the smoke gets slightly ashy. I’m also getting a floral note. With water it’s all about the apricot again with a bit of toffee and brown sugar–salt brings up the rear.

Palate: As on the nose but in a different order (gunpowder, apricot, salt). Minerally peat here too but fewer of the sweeter notes from the nose. On subsequent sips the salt is front and center and the minerally peat is more present too along with a bit of pepper. Still not as much fruit as on the nose. With more time citrus (dried orange peel) does emerge to join the apricot but the minerally peat, pepper and gunpowder are to the fore. Water pulls out more of the citrus but also intensifies the peat. Indeed, it becomes more intense all around.

Finish: Long. The gunpowder comes back and the salt really intensifies. After a while the pepper emerges. With more time some of the apricot begins to hang around longer as well. Water keeps the fruit going longer on the finish with more orange here.

Comments: Very much the older, more graceful sibling of the 10 yo with far less of the trademark pepper. I really liked the nose a lot (somewhat Highland Park’ish) but the palate was not quite at that level. Still, very good indeed. I’ll be tasting this again tomorrow alongside a release from 2011 and I’ll be interested to see how they compare. Oh yes, I liked this better with water.