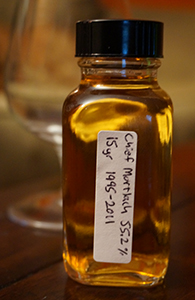 Mortlach has been in the news a lot this year with the launch of their hyper-expensive new line. Prices of indie casks from the distillery seem to also have gone up a little as a result. It will be interesting to see if things remain that way in the long run. Diageo may want to protect the new profile of their brand by making fewer casks available to the indies but if production is also going up (a big if) then more casks will become available anyway.

At any rate, this is not a recent release. It was released in 2011 by Ian Macleod’s Chieftain’s Choice label. This label used to be quite ubiquitous in the United States once upon a time, but I haven’t noticed too many new releases—not that that means very much given my general level of obliviousness and my disinterest in reading press releases and marketing materials. This was a bottle I thought hard about when it was first released but after tasting it at a Minneapolis store decided against it. I did love an older Mortlach bottled by Chieftain’s for K&L and so always wondered if I’d given unfair short shrift to this one. And so I’m very glad to be able to review it again from a large’ish sample.

Nose: Dusty oak, a lot of it at first. Some honey below that and then expanding citrus (orange peel) and then some more fermented fruity notes (pineapple?). The wood turns from dusty to polished and there’s just a bit too much of it. No dark sherry notes as such. Water releases a slight nutty quality, emphasizes the fermented fruit and pushes back the wood.

Palate: Leads with the citrus cocktail and the wood is not as prominent as I feared it might be. No darker sherry notes here either but it’s quite pleasant as I swallow. About the same on subsequent sips; with more time the wood emerges early on the palate as well. Let’s see what water does. It makes the wood spicier and integrates it better with the other notes.

Finish: Medium. The citrus continues into the finish but then the wood comes leaping out. It’s not offensive but it’s just not in balance. Water keeps the wood more under control on the finish too (and it lengthens the finish).

Comments: Not what anyone thinks of when they think Mortlach from a sherry butt. Must have been an American oak cask with the wood doing more of the talking than the previous contents (as the notorious Mr Tattie Heid always likes to remind us is often the case). Then again, given how much wood there is it can’t have been an inactive/refill cask. But it’s not just the missing sherry oomph that’s interesting; it’s also the lack of the meaty, heavy character of the spirit itself. Maybe it was an anomalous production run for some specialized purpose that this cask came from. Anyway, atypical but not bad at all. If not for the wood that just got stronger and stronger this could have been pretty good. Water did help with that but not enough to pull it into the next tier.