We were in Los Angeles for a little short of two weeks at the end of December and early January and, as usual, ate somewhat excessively. Reports on most of those meals will show up on the blog over the next month or so, though not in sequence. First up is the meal we were looking forward to the most: dinner at Shunji.

Shunji opened a little less than three years ago and in pretty short order rocketed to near the top of Los Angeles’s sushi scene (probably the best in the United States); most of the cognoscenti rank it in the tier below Urasawa (a restaurant I am unlikely to eat at in the foreseeable future). We ate their lunch special “omakase” this summer and while it was good we were not blown away (we both thought Kiriko’s lunch special, on this trip and previous, was far superior). When I said as much on Chowhound’s Los Angeles forum a lot of people insisted that the measure of Shunji cannot be taken without doing their full-on dinner omakase. Frankly, based on the nature of some of the conversation, I think there’s a bit of “Shunji’ism” at play on the Chowhound LA forum, but the point was well-taken and so we resolved to do the full omakase on this trip. And so we did. And it was a very good meal. But, again, it didn’t rise to the level of a transcendental experience—more on this below.

First, a tiny intro for those who don’t follow the Los Angeles sushi scene: The Shunji in Shunji is Shunji Nakao who was one of the original chefs at Matsuhisa in its heyday and was later at Asanebo, and then at the more controversial The Hump (who were notoriously busted for selling whale). So he’s been a major part of the LA sushi scene for quite some time now. At Shunji he’s known not just for his sushi but also for more elaborate cooked dishes and for kaiseki-style meals incorporating them and raw fish and seafood. At lunch it’s sushi only, so if you want the cooked stuff dinner is what you want; and generally you want to make a reservation, especially on the weekends, and certainly if you want to sit at the bar (there are only 9-10 seats).

We made a reservation at the bar for a Friday evening just as the restaurant opened at 6 (we were traveling with our young boys and needed to get back to my mother-in-law’s place before they drove her insane). Unfortunately, we couldn’t get a seat in front of the man himself—those seats, it transpired, were reserved for Japanese customers who clearly knew him very well. Seated at the corner of the bar, I still had an unimpeded view of Shunji’s station and so got to enjoy watching his knife-work over the course of the evening. The young assistant chef who served us was nice enough but neither as technically adept nor much of a presence—which is not to suggest he did wrong by us. It’s just that it was quite clear that the four people sitting in front of the boss were having a very different experience. But the food is what we were there for.

As with almost all of Los Angeles’ sushi places, there’s a great deal of confusion about prices and what you get for those prices at Shunji. Their website presents very little information and for some odd reason most of the people who post about meals there on Chowhound seem reluctant to talk about price. Well, I can tell you exactly what we paid and what we got for it. On the night we were told the dinner omakase would come in between $130 and $160 (“on average”). There was also the same sushi special that’s available at lunch (though now $50 rather than the $40 we paid at lunch in the summer and with two less pieces of nigiri—as to whether this difference is only at dinner, I don’t know; I do know that the people next to us who ordered it got pretty much the same progression of fish as we did at lunch in the summer). There is also a separate sushi-only omakase, which we were told would probably run us a little over $100/head depending on what we got but it wasn’t clear how many pieces that includes. And you’re also able to order sushi and cooked dishes a la carte if you like (a hand-written board lists what’s available).

Well, we were there for the dinner omakase and that’s what we ordered—we asked that it not go over $160/head (this was negotiated with our waitress and not directly with the sushi chef). A bit of a splurge, admittedly, but we skipped our usual monthly high-end dinners in the Twin Cities in November and December in exchange. After it was established that we have no food restrictions the cavalcade of food began. Here were the courses—see the slideshow below for the requisite food porn, detailed descriptions and our takes on the individual dishes and the commentary below for our take on the meal as a whole: 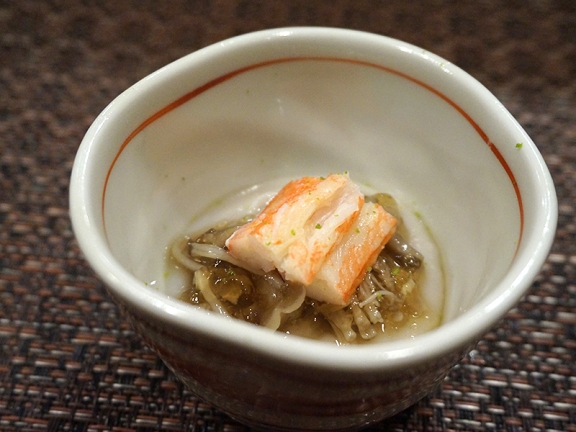 Cold vegetable “soup” of pureed taro with Japanese mushrooms, topped with snow crab. This was nice on its own terms but felt like too heavy a start to the meal.

Conch, persimmon with miso paste, snapper in aspic, marinated cherry tomato, herring roe with seaweed, ankimo with caviar. This platter, on the other hand, was light, fresh and as delicious as it was creative. 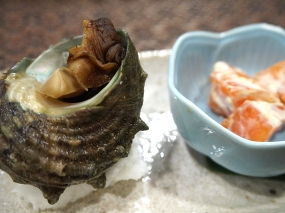 Unnecessary closeup of the conch.

Likewise for the herring roe and ankimo. I missed the exact term used for whatever was done to the herring roe. It and the ankimo (monkfish liver) were the highlights on this plate.

Steamed hairy crab. This was served with a vinegar and ginger dipping sauce and the innards. This was rather good, and appreciated even more by the missus who likes crustaceans more than I do.

The poor bastard of a needlefish holding its own deliciously deep-fried spine aloft in its mouth. 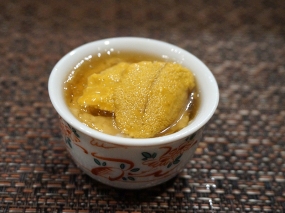 Home-made tofu with sesame paste, dashi gel and Santa Barbara uni. This was rather lovely and perfectly put together.

Their famous agedashi tomato “tofu”. There’s no tofu here, only compressed tomato (I would guess tomato water bound by agar etc.) in a lovely dashi. I was looking forward to this and it did not disappoint—one of the highlights of the meal for me. Culinary trickery aside, this was delicious and heartwarming. 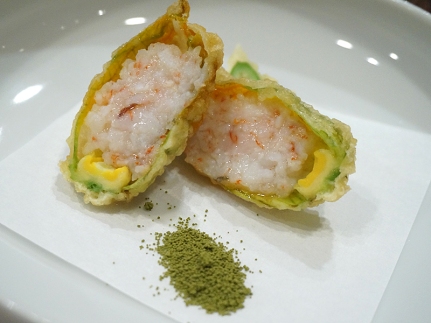 Zucchini flower tempura stuffed with shrimp. I got the raw end of this deal as mine was rather greasy. The missus liked hers a lot though.

A rather large bowl with napa cabbage at the bottom with steamed black cod, porcini mushrooms and grated mountain yam (and miso paste, I think) in that same lovely dashi. This was a very tasty dish per se but felt off in its placement in the menu. For one thing it felt like an overlarge portion (especially compared to everything else); for another it followed closely on two other broth based courses; and for a third, the liberal use of dashi in both this and the tomato tofu that preceded it only made us think of that dish which we liked a lot more.

A terrible picture of a very nice piece of seared kinmedai or goldeneye snapper.

Shunji Nakao preparing chutoro for luckier people than us.

Katsuo or bonito. Nothing great, I thought (though better than the picture).

This inada or baby yellowtail was quite good.

This otoro was excellent. 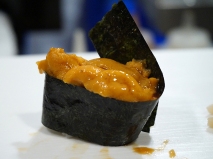 As was this Japanese uni.

We got and shared the mango and lemon ice creams. Quite good but I was led to expect they would be much better than they were.

So, our overall assessment. As I said, it was a very good meal. There were some outstanding highs and no real lows (the heavy first course and my greasy tempura were the only real disappointments but by no means were they bad). At the same time, while the courses seemed to be following a traditional progression the sequence of what was actually served in them didn’t always work as well as they could have (see my comments on the otherwise tasty black cod/mountain yam dish). And finally, while the nigiri were all good none of the pieces we got were any better than what we’d eaten a couple of days earlier in Kiriko’s set lunch omakase (and four of the five pieces at Shunji were identical to those in Kiriko’s $46 special, and, as I say, no better in quality than those had been; in fact, we both thought Kiriko’s kinmedai was superior). On the whole, then, I’d say it averaged out to a very good meal but not more.

And a word on the nigiri and number thereof: after the third piece of nigiri (the inada) the chef asked us if we were done or wanted more. We were certainly not done, but we had no idea where we were in the posted $130-160 average for the omakase (you’ll recall that $160 was as high as we wanted to go). But we wanted more than three pieces of nigiri. Would we like otoro and some Japanese uni, he asked. Greed trumped discretion and we said yes. After those two pieces he asked us again if we wanted more. Once again, we had no idea what the bill was pushing at this point; at the same time the missus was pretty full and I didn’t want to eat more on my own, and so we moved on to dessert. When the bill arrived we were at $140/head for the dinner before tax and tip (I also had some beer). I would imagine that if we’d stopped at three pieces of nigiri sans the otoro and uni we would have come in close to $120. And we could probably have added 3-4 less premium pieces before the otoro and uni and got to $160. But it’s not as though we expressly wanted to get to $160—I include this information in case it’s useful to anyone else who’s not on as carefree a budget as most of those who’ve reported on omakases at Shunji seem to be.

Would we come back? Maybe, but I’m not sure I’d do the dinner omakase again. And I’m also not sure, as I said, that the quality of the nigiri we were served was any better than what was in Kiriko’s set lunch special. I’m sure people will tell me that if I were to become a known entity there (hard, considering I live in Minnesota) I would have an even greater experience still, but frankly when you’re paying $140/head excellence should probably be the baseline—and this meal fell short of that. And even if I lived in LA I don’t have the budget to put in the reps to become a known entity. So if we came back we’d probably get the $50 sushi special, add on a bunch of premium pieces and the agedashi tomato “tofu” and be much happier closer to $100. And I don’t think that will be a bad way to go at all.

On our next trip in the summer we’ll probably hit up Kiriko or n/naka for dinner instead.