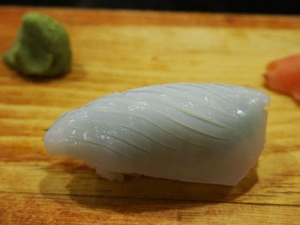 Every time we come back from Los Angeles in the summer I go through sushi withdrawal and begin to think hopefully about sushi in the Twin Cities. I’ve described my prejudices before, in my review of Origami, which, unfortunately, also seemed to see those prejudices confirmed. That experience seemed at the time enough to ward off thoughts of sushi in Minnesota for another 10 years. However, predictably enough, at the conclusion of this summer’s trip I once again began to think about eating sushi here.

This is another thing I blame our blah meal at Sasabune, Beverly Hills for. While leaving that meal I said to my wife what I noted at the end of that writeup: that the saddest thing about that meal was that it was likely still miles ahead of the best sushi in Minnesota. But then I began to think that this was perhaps unfair. In the wake of my Origami review a number of people (online and offline) had said that Origami was really not very good anymore and that the places to go now were two newer places: Sushi Fix in Wayzata and Kyatchi in Minneapolis. Perhaps these places, which now show up near the top of Twin Cities sushi lists and are lauded for the quality of their fish, could be at least as good as third or fourth-tier sushi in Los Angeles (depending on where you put Sasabune, Beverly Hills).

There was no way that the missus was going to go with me to find out (she even bailed on sushi at Origami less than halfway through the meal) but as I was returning to Minnesota by myself for two weeks, opportunities for solo dining presented themselves. Indeed, I ate at both Sushi Fix and Kyatchi. First up, a report on Sushi Fix.

The restaurant is located in Wayzata, a western suburb of Minneapolis in the middle of goddamned nowhere. And the closer you get to it (and it took me a long time to get close to it) the less likely it appears that a highly-regarded sushi restaurant might be located there. Then again, being located in Wayazata is not even the most unlikely thing about Sushi Fix; that is probably the fact that it made its reputation not as a restaurant but as a food truck. Granted, I am not a fan of eating at food trucks in general, but the thought of sushi from a food truck seems a little frightening to me. But apparently they did so well that they were able to open a brick and mortar restaurant and then expand it. They still operate the food truck, with the restaurant open only for dinner.

It is also said of Sushi Fix, often by the owner, that they get fish in from the coasts and Japan on a near-daily basis (at the bar I was told it was six days a week) and that their sources are different from those of other Twin Cities sushi restaurants. All of this sounded promising and when I got to the restaurant (at 8 pm on a Friday night) I was also glad to see lines out the door—and even the bar was full. Still, most of those waiting were larger family groups looking for tables and so I didn’t have to wait too long for a solo seat at the bar.

I did notice two things while waiting for my seat that made me wonder a little bit. First, almost all the food whizzing by to the tables seemed to be either cooked and from the kitchen or involve rather baroque looking rolls, with only the occasional order of nigiri coming out from the sushi bar. Second, the walls around the booze bar, on the opposite side from the sushi bar, were bedecked with bottles of Japanese whisky; however, on closer examination these seemed to be multiple bottles of the same whiskies. There’s less here than meets the eye, I texted to my friend Tallulah, and I hoped it wouldn’t be an allegorical warning about the meal. Alas.

Once I sat down and got set up two things became quite clear. The first is that bizarro rolls are their bread and butter. That is almost all the three sushi chefs were preparing, and they had to keep doing it at a breakneck pace all through the evening. Even the people at the bar were largely eating rolls—and I’m not talking traditional rolls but things with names like Green Goblin, Jackie Chan and Ay Caramba Mexican Roll. I was the only person at the bar eating nigiri-only or even a nigiri-intensive meal and serving me was clearly a bit of a distraction from the rhythm they had going behind the bar.

Second, this was not an aberration: they obviously don’t get much serious nigiri-only custom at the bar on any night. I say this because they’re not set up to serve nigiri piece by piece to customers at the bar. I would have to get two of each, I was told. “But,” I said, “that means I’ll not be able to try very much of your fish”. “You could get our Chef’s Choice,” the young, personable chef said; but before I could ask about it he said, “but actually that will also give you double pieces of many fish and it’s not only nigiri”. Seeing my disappointment he conferred with another chef and they agreed to serve me piece by piece as I’d expected they’d be doing in the first place at the bar. Confirmation that this was not an aberration came at the end of the dinner as they had to go through some contortions to get me a check (I was charged for two different combinations to get to the prices of the pieces I actually had).

Okay, on to the fish. Things didn’t start promisingly with a conversation somewhat reminiscent of the one at the start of the meal at Origami. I asked and was told that everything listed was available but then the first two pieces I asked for were not (suzuki/seabass and hirame/halibut). But, fortunately, these were the only instances; after that everything I asked for was available, though it might have been better if some were not. This is what I got:

A fairly vanilla selection; and the only other thing they had that I passed on was bluefin tuna (when I checked at the end of the meal, the young chef said, “You’ve had everything else”). The fish is sliced quite large and the rice was acceptable, and there were no problems with the knife work. So what went wrong? Well, not a lot at first. The first two pieces were perfectly fine, if nothing special and a couple of others were quite good (the sockeye salmon and the squid). The problem is that the things that were not good were very not good and absolutely belied the claims of fresh delivery from the coasts and Japan. 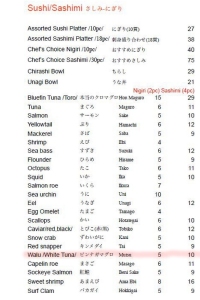 The “white tuna” is highlighted at the bottom.

Take the live scallop that was a special. When I asked for it the chef couldn’t find any and disappeared into the kitchen for almost seven minutes before emerging with an already opened shell. The presentation of the scallop itself (not as nigiri) was fine but one sniff signaled what the first bite confirmed: this was not fresh. The scallop had no sweetness, the taste was tired and not “clean”. This was also true of the ikura/salmon roe: you can actually see the lack of freshness in the picture below; most of the roe was deflated and soft and the taste was again dull and cloying. The worst, however, was the uni, which was just a dull, lifeless, limp rag and exactly the kind of experience that makes people who’ve not had uni before swear off it.

And then there is the matter of the “white tuna”. I’ve never seen “white tuna” on a sushi menu before and ordered it, assuming it was albacore. What showed up, however, was clearly not albacore. I confirmed this with the chef. “What is it then?” I asked. After a pause, he said “escolar”. Now, I’ve never seen escolar at a sushi menu either, which made me wonder. But the desire to try something new overcame skepticism and I ate it. The piece itself was fine (unctuously fatty) but I couldn’t understand why they would list it as “white tuna” if it is in fact escolar. Well, if you google you’ll discover two things. First, is that there’s a reason not a whole lot of escolar shows up on menus (eating too much of it can have an unfortunate effect). Second, listing escolar as “white tuna” is a bit of an established scam: see, for example, this “whistleblower” article in the Star Tribune. Now, I’m glad to report I did not suffer any of the ill-effects, but I do wonder why the alleged “best sushi restaurant” in the Twin Cities is engaging in deceptive labeling practices, and why no one has mentioned it before.

Pictures (with some more detail in the captions): 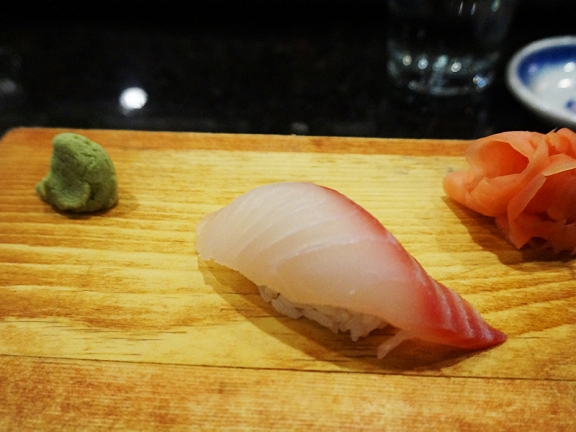 Red Snapper/Tai: This was fine.

The hamachi/yellowtail was also a decent iteration.

See the write-up proper for the larger issue. The piece itself was fine if not very interesting.

The Norwegian salmon was okay. A little too cold and the flavour a little blunted.

The sockeye salmon, however, was very nice.

The saba was a bit too chewy. As to whether this was due to freshness or the cure, I’m not sure. 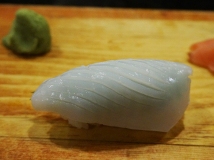 The squid was nicely done, though the shiso leaf between it and the rice could have been left out.

A disaster—see the larger writeup for more details.

I hope you can actually see what’s wrong with the salmon roe.

And likewise for this terrible uni.

So, again, it seems highly unlikely to me, based on what I ate, that Sushi Fix is in fact getting fish of the quality and freshness they claim; and if anything I ate was from Japan it was either from some inferior source or not stored well. I also have to wonder why they would in fact go through the hassle and expense of getting deliveries six days a week as they claimed to me. When 95% of what they’re serving is rolls in which the quality of the fish doesn’t need to be very much more than edible, what would be the point?

Anyway, this was a meal that had some potential to start but ended very badly. With tax and tip it cost $51. I’m not making the trek out there again to see if it was an aberration. If you think it is, please write in below. In the meantime, if this is indeed the best sushi restaurant in the Twin Cities my diagnosis of the scene is not very much better than that based on Origami. Indeed, I’d say the better pieces at Origami were far superior to anything I got here (especially their uni). Anyway, next up: Kyatchi.