This has been a very hot and humid week in southern Minnesota. And I spent altogether too much of it making vast amounts of tomato sauce to freeze for the winter (eating seasonally is for people in more temperate climes). So when the weekend rolled around the last thing I wanted to do was to be standing over a stove. Therefore our lunch today was both raw and cold. Last night I made gazpacho from Rohan Daft’s criminally under-appreciated Menu Del Dia and put it into the fridge and this afternoon I improvized a batch of tuna ceviche. I am confident that all those who had absolutely no interest in my last recipe involving raw tuna will be all over this one. Once again, I used frozen ahi tuna purchased from Costco. Some of my friends are a little alarmed by my eating this tuna raw, but I live on the edge*. 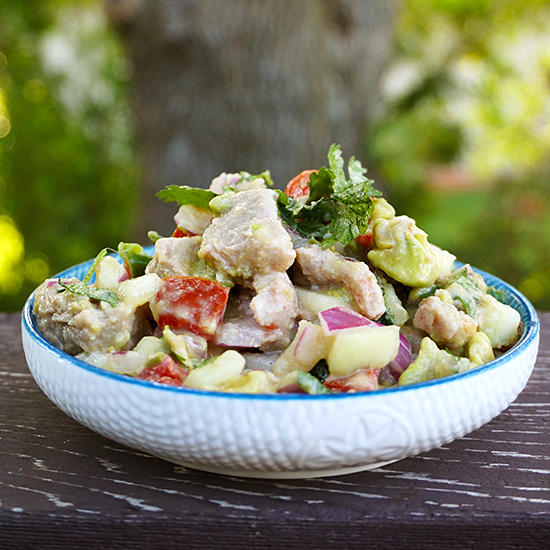 This picture was taken of the leftovers, which I ate for dinner. As you can see, the extra hours of sitting with the lime juice has rendered the tuna completely opaque.

*I’m quite confident that this tuna is flash-frozen at sea at ultra-low temperatures. It’s not, as a result, as beautiful to look at raw as sashimi-grade tuna but I doubt there’s any risk involved.

2 thoughts on “Tuna Ceviche with Avocado and Tomato”