Kyatchi is a relatively new entrant to the Minneapolis sushi market. It opened just about a year and a half ago and has steadily acquired a strong reputation. When I posted my account of our not-very-good meal at Origami last year a friend recommended it instead; and since then it’s been showing up near the top of many people’s lists. But the same is true of Sushi Fix and I was very far from impressed with my meal there. So, while I’d planned to hit Kyatchi right after that meal, I was a little gun shy. But then I read this interview with Chef Hide Tozawa on City Pages and he seemed to hit all the right notes for me, promising an experience not centered on wacky rolls, unlike at most MSP restaurants (“if you look at my menu, especially sushi, there are no Americanized rolls. I made those things enough in my career in the United States. I want diners at Kyatchi to see what a single ingredient can create if it is done right”); and suggesting that their selection is not limited by their laudable focus on sustainable fish (“Welcome to 21st century transportation. It’s great. You can get whatever you want overnight”).

This last was important to me. I’ve been slow to board the responsible sushi-eating train (I only finally gave up on bluefin this summer) but doing a little bit to make sure that my children will also be able to eat interesting fish when they’re grown up seems worthwhile. That said, the nigiri selection on Kyatchi’s website is very limited and far narrower than what’s listed on Seafood Watch’s guide to sustainable fish. They do note that they have daily specials and between that and the chef’s comments about the easy availability of any sustainable fish they wanted, I assumed my environmentally conscious meal would not also be a limited meal. This did not, unfortunately, prove to be entirely true.

Their selection was pretty much just what is on their website and there was no other nigiri on their specials board. I asked Chef Tozawa about this and he explained that while there is indeed a lot more sustainable fish out there than they offer it’s not feasible for him to get a lot of it due to supply chain and cost issues. The complication is that they’re not just eschewing threatened fish species per se, but that they’re only serving fish that is certified sustainable. So even though things like uni (sea urchin roe), hiramasa (rainbow yellowtail), bonito (skipjack) and Spanish mackerel etc. are listed by Seafood Watch as “Best Choices” (and there’s far more in the “Good Alternatives” section) he can’t get them to MSP at all in some cases, or, in other cases, at feasible prices.

He also noted that he has to be realistic about what this market will support. To that point, they have a very limited sushi bar: only four seats; and most of what was going out from the kitchen on the evening that I was there was not nigiri (and nor were the two other people sitting at the bar eating nigiri). As with all Japanese restaurants here, Kyatchi necessarily has to offer a broad menu of Japanese dishes. There is nothing wrong with this per se: it’s obviously quixotic to expect the kind of sushi-focused places here that abound in the upper tiers of Los Angeles’ scene. That said, it’s also important to not overpraise what we do have: if we are too willing to settle for the decent then we’re not likely to get very much that’s better than that.

And, in sum, I would say that my meal at Kyatchi was decent. From top to bottom the fish was probably better than at Sushi Fix or Origami, but if there were no lows (such as the disgusting live scallop, uni and ikura at Sushi Fix), there were also no particular highs (the Hokkaido uni at Origami). And I am sorry to say that for most of the meal the rice was subpar: hard and gummy. I am even sorrier to say that I made the mistake of telling Chef Tozawa this, for he was really not happy to hear it. I’m not usually so gauche but he kept asking me after every piece if everything was okay and after a point I felt that I had to note that the rice was not as good as the fish. He told me that this is because I might be used to bad rice at other MSP sushi restaurants and that what they’re serving is how sushi rice should be made. I didn’t want to get into it with him so I let it go, but my frame of reference is really not MSP sushi. Also, my very last piece (a handroll—they have handrolls available if you ask, “at the sushi bar only”, I was told) featured much better rice from a fresh batch, so….

Unlike at Sushi Fix there was no drama about my getting single pieces of fish in sequence. That said it didn’t seem like that was par for the course for them. They gave me a new plate for each piece and the plates kept piling up next to me—if the spot next to me at the bar hadn’t been empty that might have been an issue. Service was relaxed and while the restaurant was busy I was able to talk occasionally with Chef Todawa throughout the meal (he only prepared a few pieces of what I ate—he seemed to be mostly supervising the bar and what was coming out of the kitchen). My photographs are as crappy as usual—the restaurant is nice and bright but apparently I couldn’t be bothered to set the exposure appropriately.

I started with a piece of suzuki (sea bass). It was not the most promising start: the fish was a little too cold, and the rice was borderline unacceptable.

The yellowtail was better though not as oily as it can be.

The albacore was better than decent. Not served with any garnishes as it often can be.

The scallop was also quite good: clean, fresh, sweet.

The sweet shrimp was also decent. 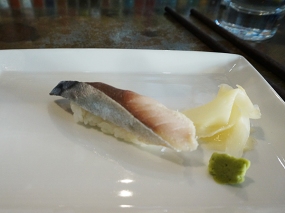 As was the mackerel.

I was happy to see the head of the shrimp return, deep-fried. Very nice.

I want to say this was Alaskan salmon, but don’t quote me (my stylus scrawled phone notes are not very legible: I can’t make out if I abbreviated Alaskan or Atlantic).

This was a first for me: Arctic char. Nice but very solidly in the salmon family. 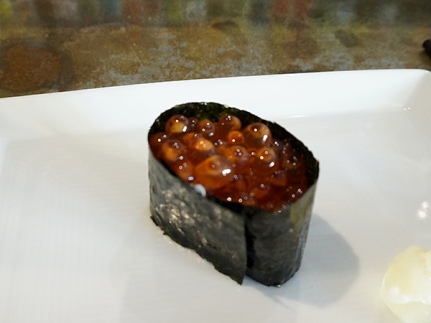 Of the salmon roe I will say that it was nowhere as bad as at Sushi Fix, but also not the best example of its kind.

I asked if they had handrolls and was told they make them at the bar if asked. I asked for one with hamachi and scallions and it was quite good–and the rice was much better.

All of this came to $46 with tax and tip and the price to quality ratio was not out of whack. This would be a decent neighbourhood place in Los Angeles as well; it’s just not anything more: there’s just not a whole lot here, sushi-wise, that’s of interest. That said, I could see coming back with the family and sitting at a table and eating mostly their non-sushi items (which get good reviews too) alongside a few pieces of nigiri; and I wouldn’t be opposed to trying their oshizushi as well. That may well be the way to go. In the meantime, I think I am going to bow out of trying the other contenders in the local scene: it’s a lot of money to spend on just acceptable food and it also makes people even more annoyed at me than usual when I say so.