Chicken cooked with spinach (palak) is a popular dish in Indian restaurants in the US, though as with seemingly almost all dishes in Indian restaurants the sauce is usually heavily laden with cream. This is a heartier home-style preparation that let the flavour of the spinach shine and uses chicken on the bone to develop denser flavour. This is, broadly speaking, a Punjabi recipe, made with both mutton (goat) and chicken, and, frankly, I far prefer it with mutton—perhaps because that’s the version we ate most of the time when I was growing up. I don’t want to suggest that my recipe is a classic Punjabi recipe, however (though it may well be close); my version is a take on my mother’s version—we are Bengalis but as we lived all over India during my childhood my mother’s repertoire included recipes from various regions, hybridized by and hybridizing her Bengali instincts. My major departure from my mother is in using copious amounts of kasoori methi. Kasoori methi refers to dried fenugreek leaves. It can be found easily in any South Asian grocery: crumbled in with the spinach it adds a smoky, umami’ish depth to the dish. 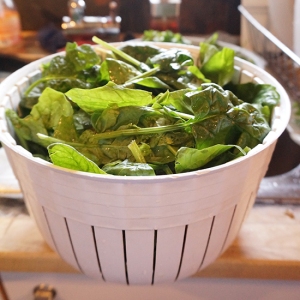 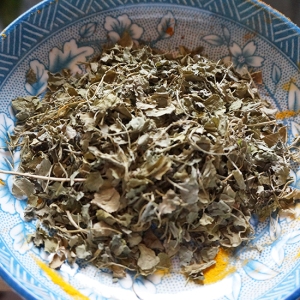