Szechuan Impression opened in 2014 and almost immediately became the major rival to Chengdu Taste in what could be called the second major wave of Sichuan restaurants in the San Gabriel Valley. The first wave, by my reckoning, crested in the early 2000s with the debut of Chung King in Monterey Park (on Garfield). Chung King carried on for a decade and a half (about three lifetimes in the SGV), moving to new digs in San Gabriel in the process, but by the time they ignominiously folded up last year they had well and truly been eclipsed by the new standard bearer, Chengdu Taste. I will note, however, that the coverage of Chengdu Taste always seemed to me to forget how good Chung King had been in its prime. Still, Chengdu Taste’s newer dishes were a revelation and their greater attention to ambience was also a far cry from the utilitarian aesthetic of Chung King and Yunkun Garden and co. One way to describe Szechuan Impression is to say that it goes further along both of those axes.

To take the second first, Szechuan Impression’s dining room’s aesthetic is a stylish, modern one that is not really associated with Chinese restaurants in the US. It has little in common with the kitschy opulence of a place like Shanghai No. I: instead, the brightness of the room, the high ceilings, the wooden tables and benches, the exposed brick etc. evoke trendy places that serve new American cuisine aimed at a very different audience, ethnically speaking. Indeed, once upon a time a room like this one would have signaled to me that it was aimed at a non-Chinese audience and would likely feature severely toned down food. That is not at all the case here. The major demographic shift in the San Gabriel Valley in the 13 years since we left Los Angeles seems to have been an uptick in wealthier immigrants and places like Szechuan Impression are clearly catering to a wealthier—and younger and trendier—clientele than used to be the case not only at the old guard but also than we saw at Chengdu Taste at our two meals there.

The food too seems to be in line with trends in mainstream American dining with quite a lot of what seem like street foods and snacks and far less of an emphasis on more familiar, traditional dishes—though please keep in mind that my knowledge of Sichuan cuisine is relatively small (I could be wrong about all of this). The cooking too, at least in what we ate, was more refined than at Chengdu Taste: with greater subtlety in some dishes and in general a lighter hand with oil and chilli peppers. Of course, this could just be an artifact of what we ordered; however, the selection of vegetable dishes is somewhat limited. It must be said that the prices are higher than at most SGV places: our meal came to $150 or so with tax and tip and that was without beer, which regrettably they do not serve. But the ingredients were of high quality and many of the dishes were anything but simple and hearty.

Still, if your desires for Chinese food are that it be cheap and served in crusty surroundings Szechuan Impression is not for you—but I think a taste of the food would force you to be more open-minded. That “authentic” Asian food in the US has long been served in ambience-free settings doesn’t mean it has to be; nor does it mean that food served in more stylish settings is necessarily watered-down. This is especially not true of the San Gabriel Valley which has never looked to anything but a Chinese clientele for approval—very unlike, say, the new wave of trendy and expensive Indian restaurants in the major US cities which seem to largely be serving the same old tikka masala in new bottles. Szechuan Impression’s aesthetic may be stylish and modern but the palates and desires they’re aiming (primarily) to feed are very much Chinese.

Anyway, on to what we ate! (There were four adults and three small children eating.)

As you can see, some of the dishes have names that seem to have been translated somewhat literally; this is also true of many of the titles of the sections on the menu, which range from the poetic (“Time, Defied”) to the kitschy-charming (“A Smidgen of Spice, Sweetens Your Life”) to the mysterious (“Szechuan Proveutial Delight”; provincial? proverbial?). While most of  the dishes have prosaic English names, some amount of drinking was clearly involved (“Cinderella’s Pumpkin Rides”). These amusements aside, the menu features not only translations of all the dishes but also clear indications of dishes that can be ordered spicy and non-spicy. The staff are also very fluent in English (at least those we encountered were).

Please click on an image below to launch a slideshow with larger pictures and more details on the food. 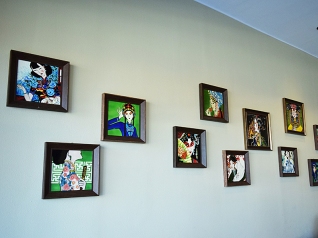 This is not a very good photograph but the walls are tastefully decorated with modern prints, rather than the masks and pottery at Chengdu Taste: a good marker of the difference in aesthetic.

Wouldn’t it be nice if you could sit at this nice bar and chomp on their snacks/appetizers while drinking a nice lager? Yes, it would. 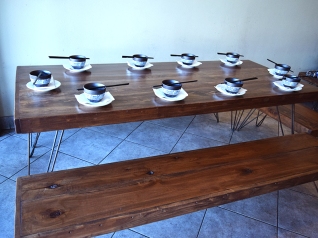 Again, this photograph doesn’t do justice to how stylish the tables are.

As are the bowls. 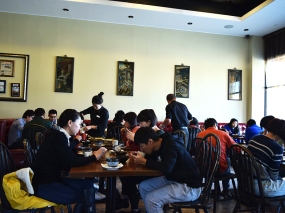 Lots of people eating when we arrived before noon on a weekday and by 12.20 new arrivals were having to wait.

Ah, Szechuan Impression, you know me too well! 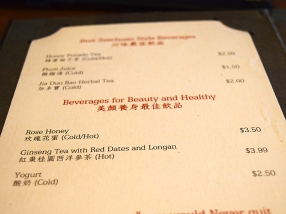 We passed on these. We’re middle-aged, it’s too late for us.

We started with these fries. Al dente and dusted liberally with ground chiles and Sichuan peppercorn, these were excellent (and would have been better still with beer). So much better than the version at Grand Szechuan in Minneapolis, which are just regular french fries in chilli oil. 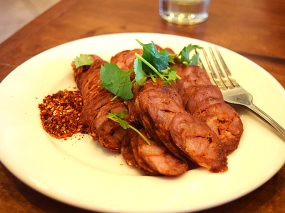 Also crying out for beer was this plate of sliced sausage. More sour than hot, these reminded me slightly of Isaan-style Thai sausages. 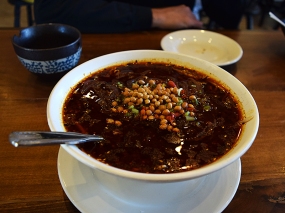 No, it’s not made with starch extracted somehow from intestines. It features (sweet) potato starch noodles in a spicy sauce with strips of pig intestine. Crispy beans of some kind on top. This was very nice but if I’d realized this was going to be so soupy I might have got something else—this because we had two other soupy/brothy dishes.

Entirely unnecessary view of the intestines.

This was for the kids and they enjoyed it. I did snag one wonton and it was quite good. 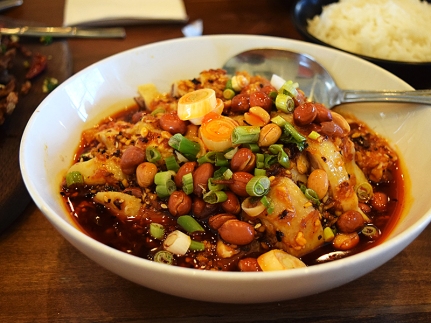 I’ve had some version of this dish of hacked up chicken on the bone in a hot-sweet-sour chilli sauce at a number of places over the years: this is hands-down the best I’ve had. High quality chicken too.

An example of how this kitchen’s take on Sichuan flavours can be more elegant than most, these ribs were dynamite: delicate smoke, just enough heat and perfectly cooked. Lovely presentation too.

This soup, which can be gotten spicy or non-spicy, shows up in two sections on the menu. The colour is from pumpkin, I believe, which also gives it a mild sweetness. It’s hard to describe: think the velvety texture of the best corn soup and the sourness of the best hot and sour soup. Slices of perfectly poached fish in the soup and shreds of enoki mushrooms floating on top. I loved it.

We’ve had a similar dish with beef at Chengdu Taste. I think that one was superior. I did, however, like the baked (?) kabocha/squash under the lamb. 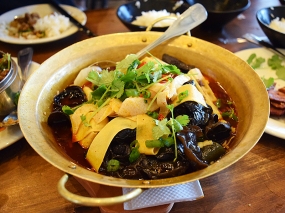 This is mao cai, a more manageable and less lethally oily version of hot pot. All kinds of goodness lurking within from mentionable and unmentionable meaty bits to thinly sliced potato to florets of cauliflower to cloud ear fungus and more. I would have appreciated it more if they hadn’t taken so long to bring it out—as we waited we kept eating the other stuff and got rather full.

Oh yes, the service: our primary server’s demeanour ranged from the impassive to the friendly but everyone else who brought over food or bussed the table was very friendly. And as an annoying food blogger I will give them kudos for figuring out very quickly on their own that it was most efficient to put everything down first in front of me and my stupid camera. One of the servers, who was probably making fun of me, took great pleasure in arranging the dishes at striking angles as he put them down. And despite the people waiting they did not pressure us to hurry up at any point. The only issue was, as I noted in the slideshow captions, that the mao cai was brought out well after everything else. Yes, we’d over-ordered but the plan was to eat a wide range and take leftovers of everything home. Unfortunately, we couldn’t stop munching on all the other stuff as we waited for the mao cai and so when it arrived we were full and not able to appreciate it fully.

Since I noted the higher price here than at most Sichuan places in the SGV, I should note that with leftovers this was enough food probably for six adults. So even at the higher than usual tab this was $25/head which is a screaming deal in the larger scheme of things. I just wish they’d get a liquor license as so much of the food cries out for beer. Anyway, If you haven’t been, you should go. You don’t have to stand in line for an hour or two outside Chengdu Taste to eat excellent Sichuan food in the SGV. I expect we’ll be back in the summer to try more of their menu.

(I should also note that our selections were almost entirely taken from a little guide to the menu that Tony Chen put together on FoodTalkCentral. Thanks very much again, Tony!)