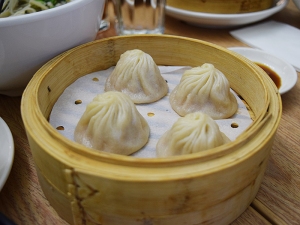 A sign you’ve married well: you get off a redeye flight from New Delhi to Hong Kong with two small children in tow and suggest to your partner that the first thing you do is sit down at the airport location of Crystal Jade for some dumplings and noodles and she excitedly agrees. This, by the way, is something all visitors arriving in Hong Kong should do, whatever the time of day. You’ve got to get your trip off to an auspicious start. Of course, it’s not like this will be your only opportunity to eat at Crystal Jade. The Singapore-based chain has >100 branches in Asia (and a couple in San Francisco too, apparently) and Hong Kong has 21 of them. 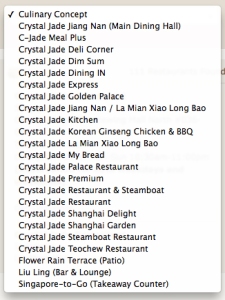 This is a good place to note that, unlike in the US, the fact that a restaurant is part of a chain is not really a mark against it in Hong Kong (or India for that matter). As I noted in passing in my writeup of Yat Lok last week, almost every successful restaurant in Hong Kong seems to have multiple locations (in fact, we ate at one place that has multiple locations right around the corner from each other!), and this cuts right across price and status lines. With 21 locations, though, Crystal Jade is approaching fast food ubiquity—and if that seems like a lot consider that they have 36 outlets in Singapore. Not all outlets serve the same things, as far as I could make out from their website. The empire includes different “culinary concepts” and these are distributed differently in different markets (see at right for the full list). Hong Kong seems to have most of them but the two things we were most interested in were dumplings and noodles and as luck would have it both the airport branch and the branch at the International Finance Center mall (IFC), where we spent a fair bit of time eating, are Crystal Jade La Mian Xiao Long Bao locations.

In four days in Hong Kong we ate at Crystal Jade three times. Immediately on arrival at the airport, dinner at their IFC location, and again right before departure at the airport (almost missing our flight in the process—it’s important to keep your priorities in order). The airport location is more informal, as you would expect, and has a much more abbreviated menu than the fancier space inside the IFC. In Hong Kong as in India there appears to be no stigma associated with restaurants in malls—in fact the tony Four Seasons hotel, and its lauded restaurant Lung King Heen are attached to the IFC as well. Based on our experience though I am tempted to say that the airport location might actually be better! Service was more attentive and friendlier there and the staff also spoke more English—not a surprise at the international airport. On a side note we were surprised at how much less English is spoken in Hong Kong vs. Singapore: not only did servers at most restaurants have minimal to no English, most cabdrivers seemed to have none either. At the IFC Crystal Jade this meant that when we were trying to figure out where some of our ordered food was it was all but impossible to communicate with passing servers—a couple of young kids out on a date finally took pity on us and translated (they also helpfully explained the local tipping protocol to me at the end of the meal: no tipping!). 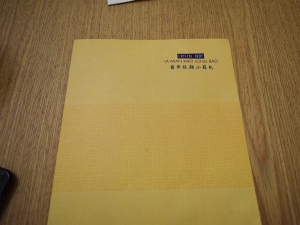 Anyway, service is not the only reason for liking the airport location. The dumplings were much better there. It’s likely that the small menu there allows for far greater attention to detail. For an example, see the picture of the XLB at the IFC location in the slideshow below: you’ll notice that one of the dumplings has unsightly congealed meat juices poking out of the top. At both our meals at the airport the XLB were pristine (they tasted great at both locations) and at the first meal (eaten right after the restaurant had opened) the noodles were freshly prepared as well (you can see the chefs making them). I don’t mean to suggest that the IFC location is anything approaching bad: the food there was very good too. It’s just that after eating at the airport we’d thought, “Wow, the dumplings at the airport are so much better than anything anywhere in the US, we can’t imagine how good they’re going to be in the city”, and it turned out they were in fact made with less care.

By the way, Hong Kong is a great place to eat with kids. Cantonese food, with its mildness and all its noodle soups, congees and dumplings, is very kid-friendly. At most meals we didn’t have to get things for them that we weren’t that interested in eating ourselves. The one dodgy bit is that if you have food allergies to worry about (we have a kid allergic to many kinds of nuts) it can be a challenge figuring out what’s in the food (see the English issue above). Luckily, we didn’t have to contend with any bad decisions on this front.

For what we ate on all three occasions and brief comments on the dishes see the slideshow below. I have to apologize for the fact that I don’t have the exact names of the dishes down. I foolishly assumed there’d be menus on their website but I couldn’t find one. As a result the names of most dishes below are really descriptions. 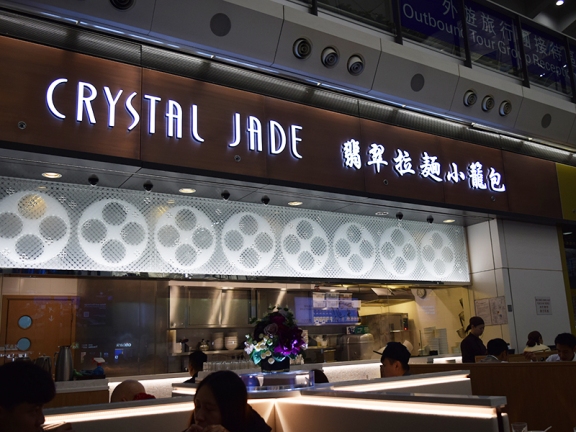 All international airports should have a Crystal Jade to welcome visitors. 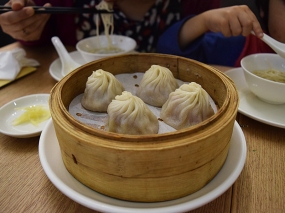 And there’s no better way to start recovering from a redeye than with freshly made, perfect soup dumplings. The wrappers were great, the broth inside was great, the filling was great. However, these were still only the third best XLB we had on the trip. 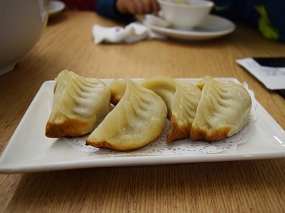 These pan-fried dumplings were also excellent. In general, these underlined the key difference between this stuff in Hong Kong and even the better places in the SGV: the dumpling skins are on another level and the technique in frying them is too. 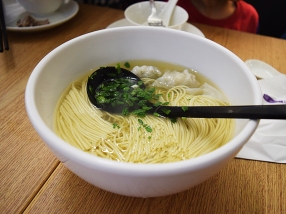 A very good welcome to Hong Kong for the boys. We polished off the rest and it was bloody good: the noodles in particular were excellent (texture). 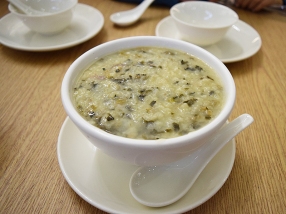 I forget which congee exactly this was. I love congee and had thought that the continuum could only be so wide, but man, congee in Hong Kong is outrageously good. This set the tone for the trip. 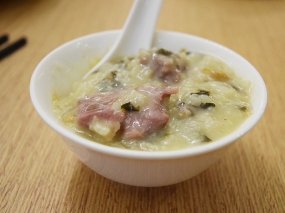 Well, it had pork in it. 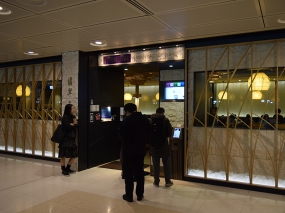 Outside the IFC location for dinner on a Friday night. We had not made a reservation and had to wait about 15 minutes. 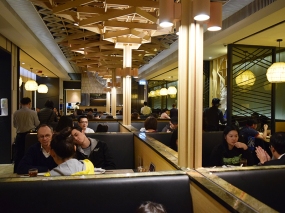 A stylish, modern aesthetic on the inside. The place was crammed with locals (Chinese and expats). 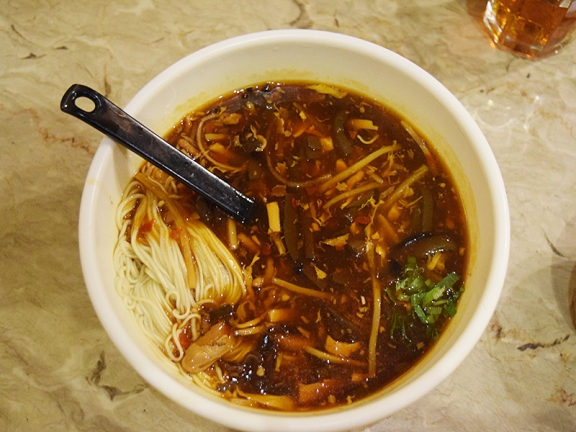 The noodles were excellent but we hadn’t quite realized until it showed up that this was essentially going to be noodles in hot and sour soup. Still, quite good. 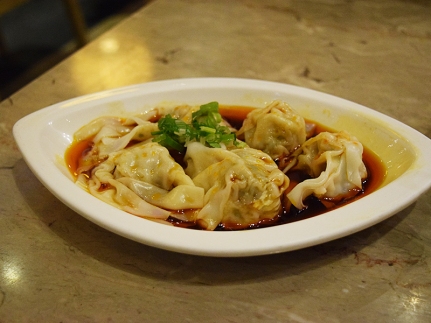 Sichuan-style spicy wontons with more of a vinegary kick in the dressing than we’re used to. Very good. 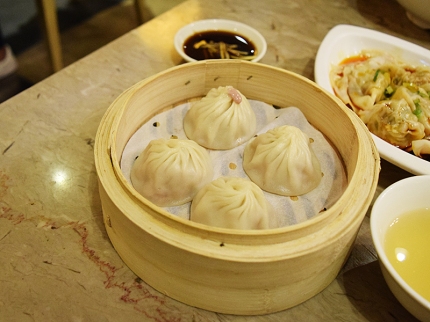 The unsightly congealed meat juice issue aside, these were very good. 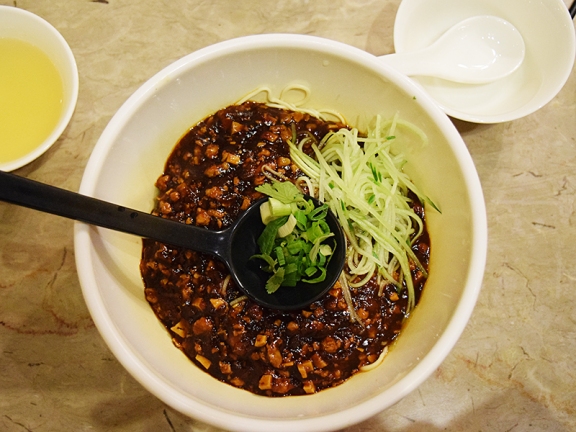 This was excellent. Noodles with a slightly spicy, quite saucy mix of minced pork, tofu etc. 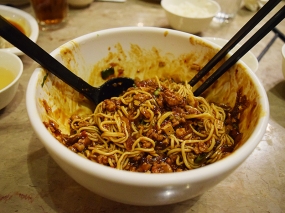 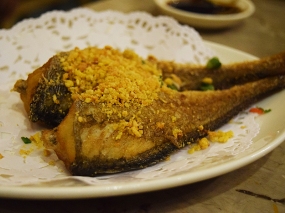 The boys had eaten large snacks before we left our friends’ home and so we got them some fried fish to munch on. This was very nicely done. 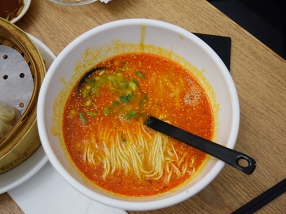 Back at the airport before departure for LAX: a somewhat soupy take on dan dan noodles and bloody excellent. 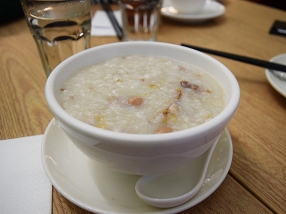 Can’t remember what the name of this one was either. 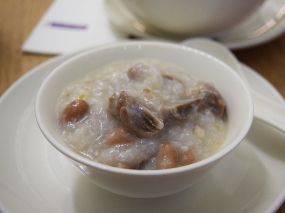 But it had pork ribs and peanuts in it. Excellent. 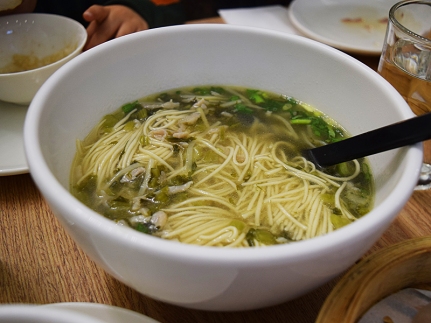 More noodle soup. This was with minced pork, I think. Also excellent. 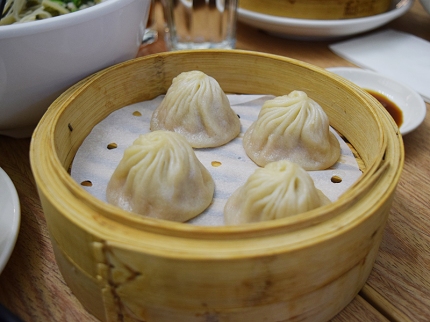 And one more order of perfect XLB before leaving for Babylon.

These were all relatively affordable meals (and I’m glad to note that, unlike at Yat Lok, we didn’t have to pay for water or napkins!) The airport meals were in the region of $30 US and the IFC meal came in at a little less than $50. By the way, when I raved about the airport branch on Food Talk Central a member there noted he often puts up with going through security while on layovers just to eat there. I can tell you I would be very happy to do the same. Anyway, people in San Francisco, what can you tell me about the Crystal Jade outlets there? And I noticed that there’s an outlet in Delhi/Gurgaon as well—I’m definitely going to check that one out when I’m back in Delhi later this year.