Well, it’s been over two months since we got back to Minnesota from Hong Kong and here finally is my last meal report. This was our last restaurant meal there and in terms of reputation this was the biggest one of them all: under head chef Chan Yan-Tak, Lung King Heen at the Four Seasons holds three Michelin stars, the only Chinese restaurant in the world with that distinction, and is on most people’s short list of the best Cantonese restaurants in the world.

We’d not originally planned to eat there—I had Fook Lam Moon on my radar instead for high-end Cantonese—but as a result of our fabulous dim sum meal at Lei Garden (also in the International Finance Center where the Four Seasons is located) we ended up there for weekday lunch. Let me explain.

Our original dim sum plans had us eating one fancy version (slot filled by Lei Garden on the Saturday we were there) and one old school version (Maxim’s City Palace was probably going to be it on the Monday). But our Lei Garden meal was so jaw-droppingly good that I had to see if Lung King Heen could possibly top it. Accordingly, I dashed over to Lung King Heen at the conclusion of our meal to see if there was any scope of getting in for dim sum there the next day. Not surprisingly, there wasn’t. Nor did they have any availability for dinner that weekend. The best they could do for us was a table for lunch right before closing on Monday; but the hostess informed me that they had a small but quality dim selection on weekdays as well that we would likely enjoy. That sealed the deal even though it meant subtracting one meal: our seating was at 2.15 and there was no way we’d be ready to eat again until well after the boys’ bedtime. Moral of the story: if you want to eat at the top Hong Kong places at a time of your choosing you have to make reservations well in advance.

But we had no regrets anyway: this was a fabulous meal. I have to admit that Cantonese is not at the top of my list of favoured Chinese cuisines (Sichuan and Hunan, in that order) and so I haven’t eaten very many non-dim sum high-end Cantonese meals anywhere—I’ve only ever been to the big places in the SGV (Elite and Sea Harbour) for dim sum. And, of course, I haven’t eaten at the better Cantonese places in Hong Kong either. That is to say I have no context for rating Lung King Heen comparative to anything else, but I can say, again, that this was a fabulous meal. It was also a very expensive meal: the most we’ve ever paid for lunch and the most we’ve ever paid for a meal that did not revolve around raw fish. And that was despite the fact that we were very careful to stay on the affordable end of every section of the menu that we ordered from.

The restaurant does offer a set “executive lunch” on weekedays (along with the “seasonal dim sum” selections, of which there are about 10). When we were there this ran HKD 540/head (or $70’ish US). This is originally what we’d planned to eat. But after looking at the menu and wondering if we would ever have such an opportunity again, and keeping in mind that it was my birthday later that month, we decided to go a la carte. But, as I say, we didn’t go all out. Each section of the menu has a number of dishes that are marked as recommended by the chef and we mostly got the most affordable ones from that subset. We still ended up spending $136 (US) per head and that was without anything but tea to drink. If you were to venture in the direction of some of the more expensive ingredients (abalone, bird’s nest etc.) you could very easily pay 3x/4x as much; and with wine, you’d of course pay far more still.

I should say, however, that portions are quite generous and if there had been a third adult with us we would have needed to order only one more main dish for all three to eat very well; as it was, the two of us over-ate (the boys had already eaten—2.15 was a little late for their lunch, luckily for our wallets). So really this meal could have been closer to $105/head, at which point a) it begins to approach the realm of a good deal (relatively speaking) and b) the rationale for choosing the executive lunch over it begins to recede. That said the executive lunch is a good option for anyone dining there alone.

So, what did we get? In the order that they were brought out:

And now some pictures of the restaurant and the food. (For some reason my camera’ custom white balance controls had a really tough time with the mix of natural and artificial light at our table.)

Tables with their famous view of Victoria Harbour are in great demand and, alas, we couldn’t get one.

The set executive lunch while we were there. 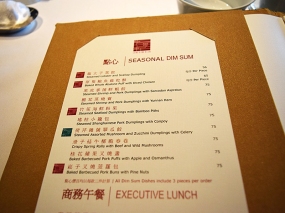 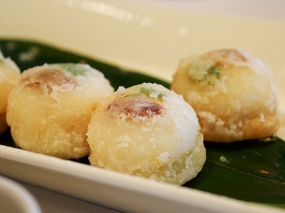 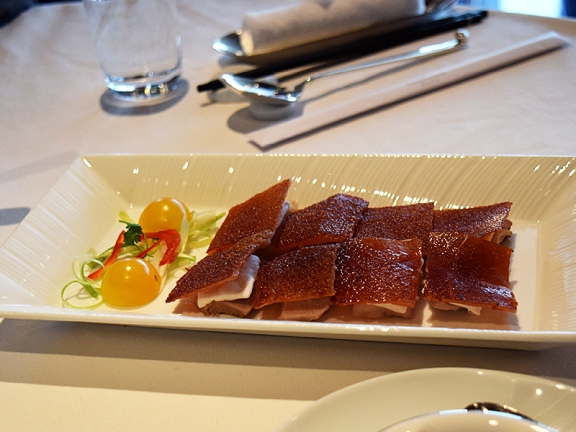 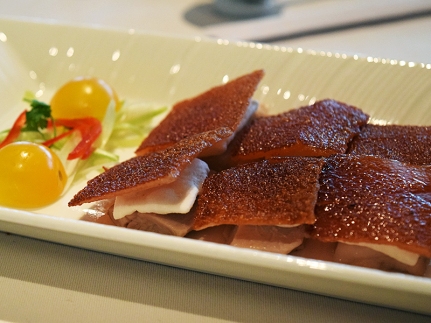 Three to an order, each sitting in a mini bamboo carrier.

Very handy for transporting dumplings to your plate without risking rupture.

I’m spacing now on what the little green tips were.

A terrible picture of an attractive dish.

A bit of a jumble as presented.

A better view of an exquisitely prepared prawn.

Served on a large platter…

…and then brought back as individual portions in bowls.

An excellent meal, on the whole. Without having tried more of the less expensive Cantonese stalwarts in town it’s hard for me to opine on the relationship between the quality and the price but the quality was very good. That said, even though we ordered almost entirely from the list of “Chef’s Recommended” dishes the full measure of a restaurant like this can probably be best taken by those with the wherewithal to order in a more carefree manner from the seafood and bird’s nest sections, where there were individual dishes that cost a significant fraction of our total bill. I’m not sure that I’d come back (if I get to come back) for another limited sampling of the a la carte menu before trying other, less expensive places in town, but I would certainly come back for their weekend dim sum and possibly also to try the executive lunch. As it is, I am very glad we got to try it.

The service was excellent, by the way: solicitous without being overbearing and not in the slightest bit stuffy.