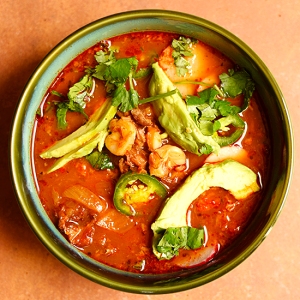 So I said last week in my Palak Posole post that I’d not already purchased hominy/posole from Rancho Gordo on account of the fact that I associated posole entirely with the Mexican soup/stew of near-identical name, and that as our local house of Mexican goodness, El Triunfo, offers a very good version on weekends I didn’t need to make it at home. Here I am, therefore, with a recipe for a rough and ready pozole rojo. You see, I soaked and cooked a pound of posole last week and even after using a lot of it in the Palak Posole and some more in a keema dish (recipe coming soon) I had a few cups left over. And as I also had a large package of pork neck bones in the freezer, it was hard to not end up making pozole. I’ve eaten a lot of pozole but have never made it before. Scanning the intertubes it didn’t seem like the hardest thing to do. What follows is an approximation/intersection of a number of recipes I looked at. If you want a more precise recipe (and with chicken rather than pork) you could do far worse than to look at the posole rojo recipe in the Rancho Gordo e-booklet on posole. Whatever recipe you use, the results are likely to be good.

One thought on “Pozole Rojo”