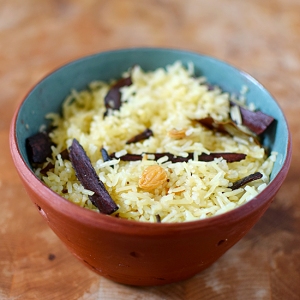 Here’s a very simple Indian recipe for a change, for pulao (puh-lao), or pee-laff, as most Americans call it. You could think of it as biryani’s vegetarian cousin, even though that’s probably not very historically accurate. What I mean is both that there is of course such a thing as vegetarian biryani and that the earliest subcontinental references to pulao seem to indicate rice and meat cooked together. You could, however, more accurately think of it as biryani’s more laid-back cousin, as it’s generally much easier and less time-consuming to make. Can you think of it as Indian fried rice? Well, some people will get very upset if you do: Chinese-style fried rice generally involves steamed rice that’s then fried with other things, whereas pulao usually involves rice cooked with other things that have been fried or sauteed. What you absolutely should not think of it as is as a dish with any sort of fixed recipe: there are various iterations up and down the subcontinent and every home kitchen probably adds an idiosyncratic twist.

In most home kitchens though pulao is usually produced on special occasions: even though it isn’t as much of a pain to produce as biryani, it’s a lot more work than steamed rice, and it’s much richer. What follows is my mother’s rough recipe for what she calls “mishti mishti pulao” or “sweet sweet pulao”. It is made with very few ingredients: some cumin, some thinly sliced onion, golden raisins and whole garam masala (the latter two together make it sweet); and, of course, a a lot of ghee. Fragrant basmati rice is the way to go (and basmati in a burlap sack has a certain je ne sais quoi). 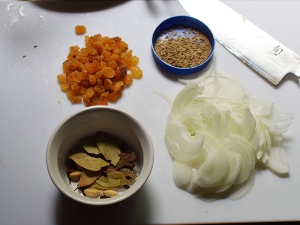 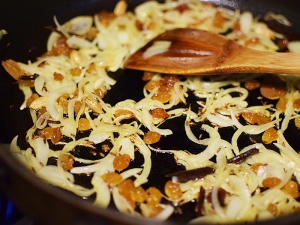 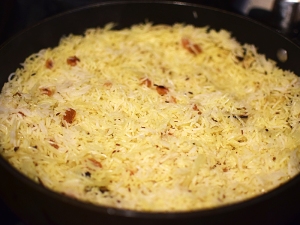 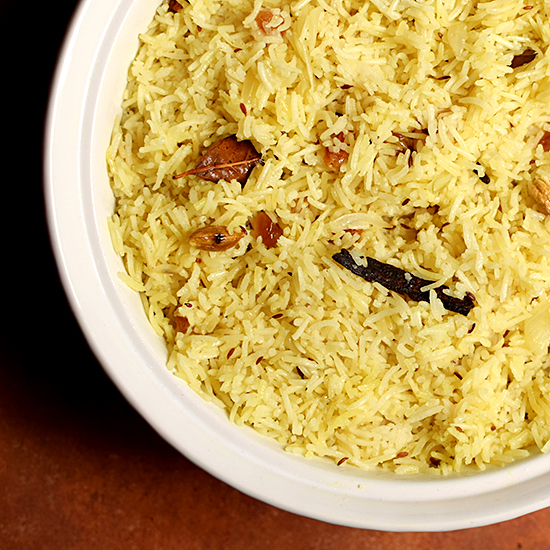