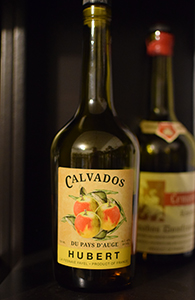 As I said on July 1, I am very new to Calvados. As such even though I’ve already made disclaimers about the nature of my Calvados reviews (there’ll be at least three this month), I’m going to make them again.

In brief, I am the furthest thing from an expert on Calvados. I am also pretty far from being an expert on Scotch whisky but in that case I know a decent amount about the history of Scotch whisky; I know quite a bit about different styles of Scotch whisky and the likely effects of variables in the production process; I know a fair bit about a bunch of the major distilleries and the profiles they’ve produced over time; and I certainly know when a whisky has flaws (whether it overcomes them or not) and when it has achieved very desirable characteristics. In the case of Calvados, I currently know only whether the one I am drinking appeals to me. And since my palate is conditioned by single malt whisky (which is also very relevant to my reviews of American whiskey) it may well be the case that what appeals or doesn’t appeal to me about a particular Calvados may have little relationship to the qualities looked for or scorned by connoisseurs of Calvados. (Among other things, I also don’t know what the plural of Calvados is: one Calvados, two Calvadoses? Calvadosi? Calvadeaux?)

You may in all fairness ask why then I am bothering with reviewing any Calvados at all. Well, partly because I am a narcissistic blogger who thinks all his experiences are worth recording and partly because I think these naive reviews may well be of use to other people. Not, experienced Calvados drinkers, mind (for all the reasons above) but other whisky drinkers like myself who are new to Calvados, especially those in the US. There’s a fairly random selection of Calvados available across the country and not very much information on most of them—if there are dedicated Calvados forums and blogs I haven’t found them. While I will not be able to give you anything approaching an authoritative guide to which the best or avoidable bottles are, my responses may give you some sense of whether a particular Calvados might appeal more or less to your own whisky drinker’s nose and palate. And who knows, I might actually develop a better appreciation for the category on its own terms as I go (and I’ll be placing my order for Charles Neal’s magisterial survey of the subject, Calvados: The Spirit of Normandy right after I publish this post). In the meantime, if there are actual experts or just more experienced people reading, I’ll invite you to supplement my comments and correct my misapprehensions. 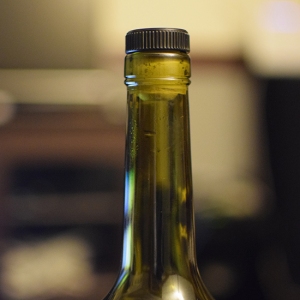 No vintage stated on the neck.

Okay, on to the first of my reviews. This Domaine Hubert was bottled for K&L in California. I chose it as my first review because they have a lot of it still available, it’s reasonably priced ($30), and it was described in terms that made it sound quintessential. Of course, to that last point, this is K&L we’re talking about—they’ve never bottled anything that wasn’t the best and/or best value of its kind, at least in terms of their marketing copy—and reality is often a slightly different matter. In this case, problems began before I’d finished my first pour.

You see, K&L first bottled Domaine Hubert Calvados in 2014. That lot was from the 2006 vintage and was said to be six years old. When I purchased this bottle they had the picture and description of that 2006 vintage bottle on their site. What showed up, however, was a bottle without the vintage stated on the neck, and when I nosed and tasted it it seemed quite young to me. After some back and forth on Twitter with David Othenin-Girard (the K&L David who is not always selling something), it emerged that this is from a later batch and that they just bottle new batches when they need them. He said they were still all six years old, but again there’s no statement to that effect on the label (and it’s not stated in the listing on their website either). He updated the picture on the website to that of the current bottle and said there was no need to amend the text as it pretty well described the current batch. On the one hand, fair enough, I suppose: we don’t expect stores to update the description of every batch of Lagavulin 16 or note that they are different batches; on the other hand, we’ve come to expect a certain consistency from Lagavulin 16, and I’m not sure that K&L fill me with that same confidence.

No age or broad age category indicated on the front label…

As it happens, I sent a sample from my bottle to Florin (The Man Without a Face); he had raved about that original 2006 Hubert and couldn’t believe the new one could be as far away from his experience of it as my initial responses suggested. He only received the sample before leaving on vacation and so hasn’t sent me detailed notes yet, but he did indicate that he’d taken a few sniffs and sips and thought it was a pale shadow of the original. Make of that what you will. (He will also be sending me a sample of the original 2006 vintage and I’ll taste that blind along with this one in August sometime.) I’ll also note that K&L list this as “Pays D’Auge Vieux Calvados”. Assuming that “Vieux” here refers to the age category and not the specific region, this only guarantees that it is at least three years old. If it were indeed six years old I’m not sure why they wouldn’t use a higher category (Hors d’Age or X.O, for example; even V.S.O.P is a higher age grade).

Domaine Hubert, Calvados (42%; Pays D’Auge; bottled for K&L; from my own bottle)

Nose: Bright green apple notes, tart and acidic, turning cider’ish as it goes. There’s also, unfortunately, a grassiness and a raw, spirity note that speaks of youth. Gets a bit sweeter as it sits with some vanilla and slightly muskier apple.

Or on the back label.

Palate: Thin, sharp arrival with not much of interest at first; the apple notes appear after a couple of beats but so does the spirity quality. The texture is too watery. No development of any kind to speak of, except that the rooty notes from the finish start showing up earlier and earlier.

Comments: The nose is the best part. On the whole, it is drinkable enough but this is far from the Calvados that will turn whisky drinkers onto a new category. I know K&L says this is six years old, but between the lack of an age or vintage on the label and the effect on the palate I’d easily believe it younger. At any rate it doesn’t taste as mature as another allegedly six year old Calvados they carry—that one’s a bit more expensive but far worth the slight premium in my opinion (review coming soon). I’m tempted to use most of the rest of this bottle in cocktails.