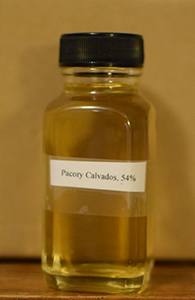 Here is another K&L exclusive Calvados (after the Hubert) and another from the Domfrontais (after the Lemorton Reserve). This is another whose age is not stated, only alluded to. Sku, from whom I got this sample, notes in his review that “while there is no age listed, K&L tells us it is five years old”. Florin pointed out in the comments that the label states the “Réserve” category which is used for three year old Calvados and wondered why they wouldn’t have used the higher category if it were indeed five years old (“VSOP” or “Vieille Réserve”). Sku noted that he “spoke to K&L and they assured me that it is 5 years old, distilled 2011. Apparently, they used existing, available labels rather than create a new one to get it done more quickly.” I found this explanation from K&L a little unconvincing and said so there but I’ll repeat myself here (I’m good at repeating myself and believe in sticking with my strengths).

First, note that K&L say that this was bottled specifically at cask strength for them:

“Would you be open to bottling these at cask strength?” we asked him, wondering if our cocktail-mixing customers might be interested in something a bit more robust. “Bien sur!” he replied.

From Sku’s picture it appears that the abv is on the label. This would imply that the label was in fact specifically made for this release. If that’s true then why wouldn’t they be able to note the age/category on the label as well? Or if they had lots of these labels with the exact abv but without the age statement lying around it would appear that the cask strength bottling was not done specially for K&L. If so, then why should we believe the other story either?

It is, of course, entirely possible that this Calvados is indeed five years old and from 2011 and that it’s only K&L’s stories that are unnecessarily specious. It is also the case that K&L’s approach to sales makes it hard to take them at face value. In the meantime, I am going to believe the label and not the story that benefits the seller: this is at least three years old and might be a bit older.

Anyway, let’s get to the Calvados itself!

Domaine Pacory, Calvados (54%; Domfrontais; K&L exclusive; from a sample from a friend)

Nose: Bright tart-sweet fruit at first—apple and pear (big surprise). Joined soon by a richer sweetness: think apple tart with vanilla and lemon zest and a buttery crust. It does have a faintly spirity edge too though.

Palate: Very tart, acidic arrival, almost setting my teeth on edge, but thankfully the spirity note doesn’t follow through here. Nice oily texture. On the second sip there’s more obvious wood than I’ve tasted in any Calvados so far (reminder: I have tasted very few) but it’s not obtrusive and works well with the tart fruit, introducing some spicy, peppery counterpoint. With a lot of time and air it develops a slightly chalky sharpness.

Finish: Medium-long. Gets sweeter again as it fades out and the last impression is again of sticky tart-sweet fruit.

Comments: This doesn’t have the richness of the Lemorton on the palate but I really enjoyed the progression from the nose to the palate and then back on the finish to the notes that were first on the nose. I think it might be sold out now, but if K&L brings in another, similar iteration at the same price, I’d say it’s much better than the Hubert if you’re looking for a reasonably-priced Calvados; and at $15 less than the Lemorton, and at a higher strength, it’s an even better value proposition—though I did slightly prefer the richer Lemorton.

Re that chalky note on the palate: this is something that doesn’t appeal to me much in whisky, but I don’t know what its status is in Calvados. Yet more research is called for on all fronts. As with the Lemorton, and despite the higher strength, I thought this wasn’t served well by letting it sit for a long time.