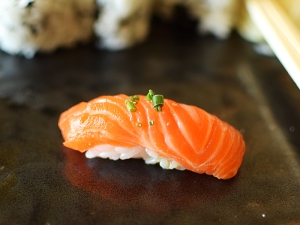 I will not annoy my Minnesota readers again by repeating my views on the quality of sushi in the Twin Cities metro area. Suffice it to say, we save our sushi dollars and eat sushi when we’re in Los Angeles. While we splurge on one high-end sushi meal on each trip (it was Mori again on this trip—review coming in a few weeks) we also eat a lunch or two at mid-range places. On this trip we decided to go back to Hirozen in Beverly Hills, a place I used to eat at every once in a while more than 12 years ago, when I lived in Los Angeles. Well, time doesn’t stand still. The name has changed (it’s Matsumoto now; everything else about the restaurant remains the same—Matsumoto is the old chef’s name) and I didn’t like it quite as much as I did back in the day. Is that because they’ve changed, or is it because then I hadn’t had any sushi that was better? Tough to say, but I suspect it’s the latter.

To be clear, I’m not saying it was a bad meal—it would still be the best sushi restaurant in the Twin Cities by some distance (sorry, MN readers!); and I do recognize that we were eating lunch at a table and ordering combinations. Still, if this had been the only sushi meal we’d eaten on this trip it would have been a little disappointing (and I liked the similar lunch at Nozomi last year better). I will say though that with its expansive menu and relaxed vibe Matsumoto is a good place to go to with kids (which is why we were sitting at a table). The boys enjoyed their chicken teriyaki/shrimp tempura combo ($14) and while we found the hamachi rolls we also ordered for them to be somewhat character-free, the boys liked them and anything that gets them more onboard with eating sushi I’m happy about (well, the part of me that doesn’t look at our bank balance is).

It is entirely possible that they are much better at the bar and at dinner and so I don’t really want to dissuade anyone from going here if you haven’t been, or haven’t been recently. You should know that they’re in a tiny strip mall (close to the Beverly Center) and given how minute the parking slots are you’ll be glad there’s a valet. The restaurant itself is not large but it’s not tiny or cramped either (though the bar is very small), and it’s a nice bright space at lunch.

What did we get? The missus got the special chirashi ($22) and I got the special assorted sushi ($23) and we added on a few more pieces at the end. All the main orders came with pretty good miso soup. What separates the special chirashi and assorted sushi from their cheaper non-special equivalents is that they include more Japanese fish. The Japanese fish selection, by the way, both in these specials and on the regular nigiri menu, is quite good (including things like nodoguro/blackthroat perch). Of what we got, some pieces were quite good but there were a few that were not good and the rice towards the end got a bit gummy. I’m not expecting a place like Matsumoto to be as good as Mori or even Sushi Tsujita but the lows were a bit lower than I would have liked and the highs were not high enough to pull the average up over, well, average.

Both the special chirashi and the special assorted sushi included more or less the same fish. These fish were: isaki (grunt), dorado (not sure what the Japanese name is), kodai (baby red snapper), tai (red snapper), shima aji (Japanese striped jack), Tasmanian ocean trout, kanpachi (amberjack). Of these the Tasmanian ocean trout, kanpachi and shima aji were quite good; the rest were anonymous. The sushi assortment also included six tuna/cucumber rolls which were acceptable. The chirashi also included uni, which the missus really did not care for—not fresh at all, she said. Additionally, we had specified “no bluefin” and while I’m not sure what was subbed in for it, I’m pretty sure we didn’t get equivalent value—so it goes.

We added on orders (2 pcs) of aji (Japanese horse mackerel), hotate (Japanese scallop) and tairagai (listed as pen shell scallop but it’s not really a scallop). The aji was quite good; the scallop was not pristine; we’d never had tairagai before but quite liked it (somewhere between scallop and razor clam in texture). They accidentally gave us 2 pcs of red snapper in place of the added-on scallop and rather than take it away they comped it, which was appreciated. I should add that, as far as I could make out, the knife work on the fish was solid (though nothing intricate was attempted).

Click on an image below to launch a slideshow with larger pictures. 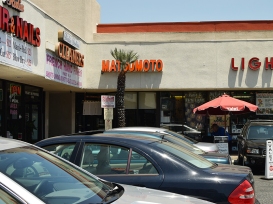 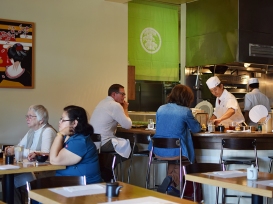 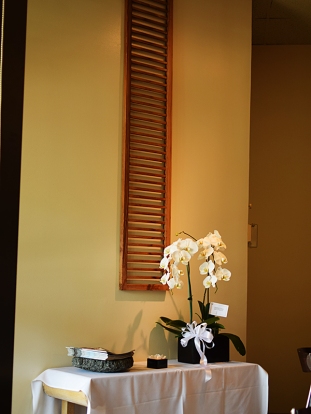 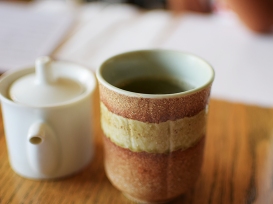 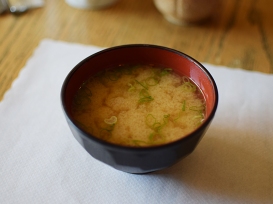 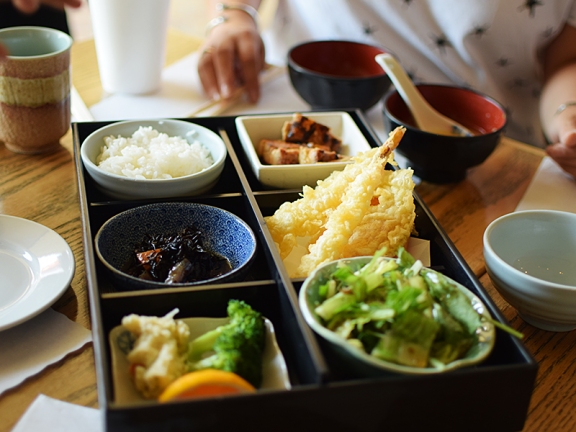 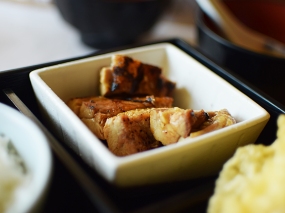 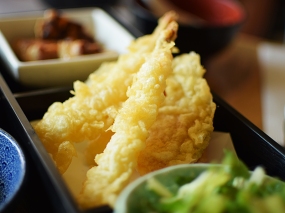 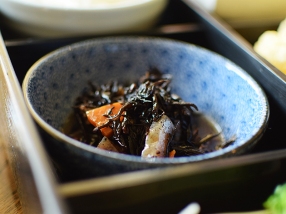 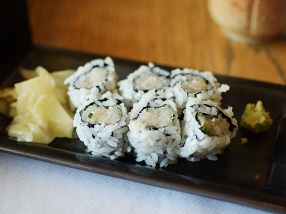 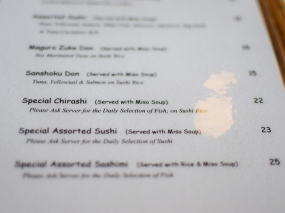 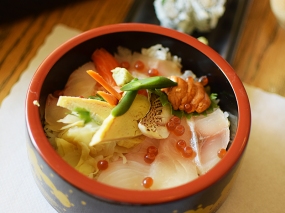 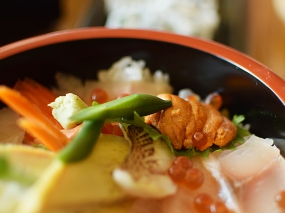 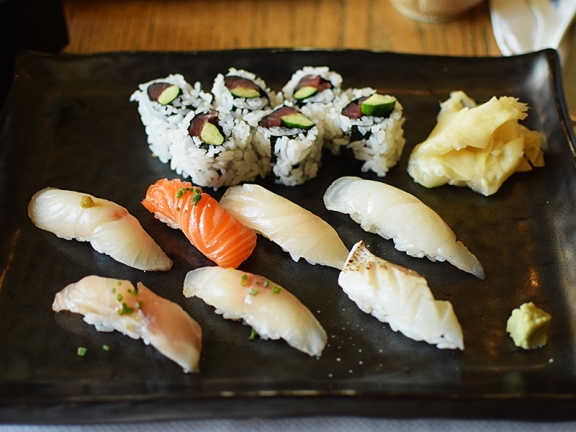 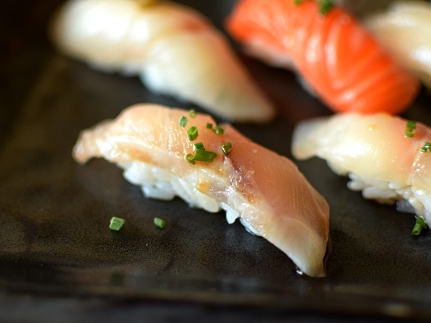 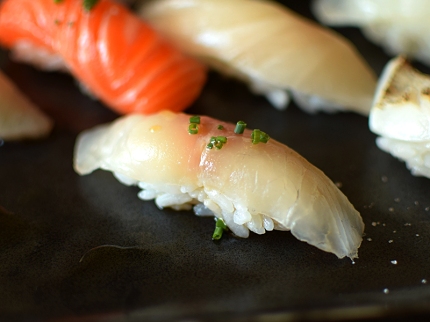 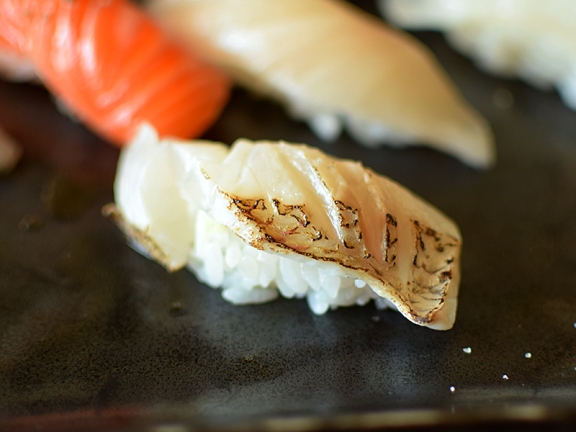 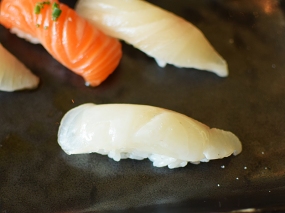 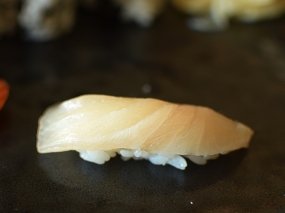 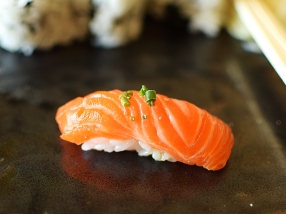 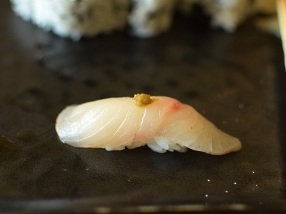 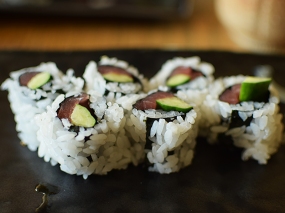 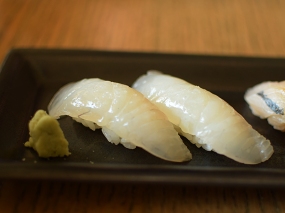 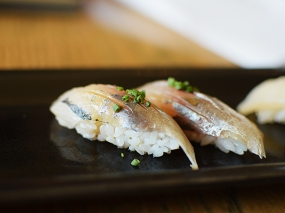 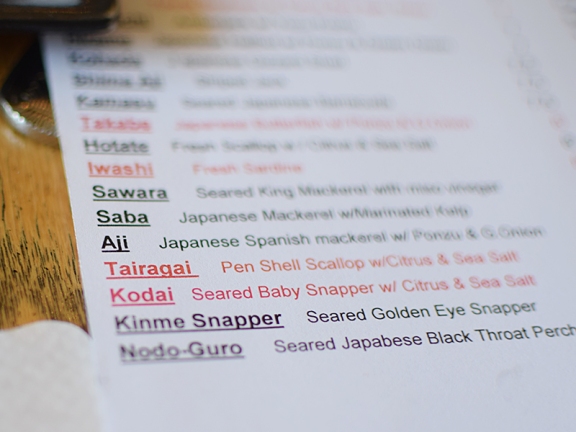 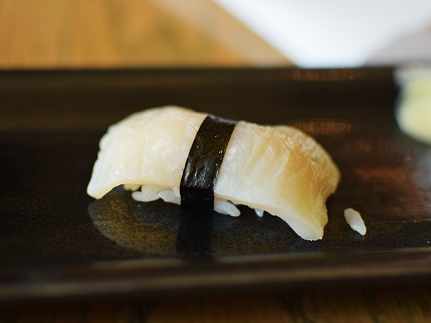 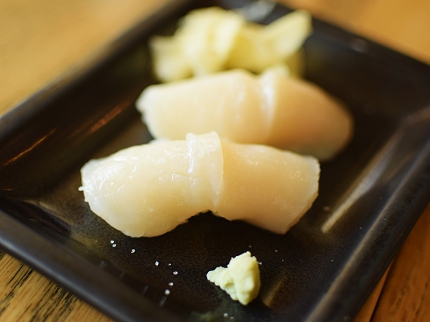 The special chirashi, the special sushi assortment, three 2 pc orders of nigiri, the chicken teriyaki/shrimp tempura combo and an order of yellowtail/scallion rolls, tea and sodas plus tax and tip came to $120. Which is not outrageous in the scheme of things; but, for context, the sushi-only cost of our meal was not very far below Kiriko’s lunch special and that’s on a different planet quality and value-wise. At any rate, if you get the assorted sushi alone and don’t go past it I’d say it’s a decent lunch for $23 plus tax and tip. I would certainly recommend it over a trip to the Beverly Hillls outpost of Sasabune.