The Clove Club, located in trendy Shoreditch, is one of London’s hottest restaurants. It started out as an informal supper club and moved to its current location in the space of the former Shoreditch town hall in 2013. It has a Michelin star and was recently named to that silly list, “The World’s 50 Best Restaurants”. Despite the latter disqualification a number of people whose opinions I trust recommended I eat there on my recent trip to London, and so it happened that on my second full morning in the city, I woke up in my hotel by the Tower of London, took a shower and walked down to Shoreditch (passing St. John Bread and Wine again on the way).

The ex-town hall is an imposing building but the restaurant once you enter does not present an overbearing atmosphere. You enter through a lounge anchored by a small attractive bar; the lounge has a number of small tables but the main dining room is off to the side of the bar, sharing its space with an open kitchen. It’s not terribly large and if you’re dining alone you are likely to be seated, for lunch anyway, at the bar. All of it is filled with lots of natural light.

At lunch the bar serves the same menu as the dining room but I believe that at dinner it’s a different story. At lunch that menu offers you a choice of ordering a la carte or a set five course menu (currently £65; prices seem to have risen sharply since opening). I chose the five course menu. If you’re counting discrete dishes it turns out to be closer to 12 courses. This because the “selection of snacks to start” listed at the top of the menu turns out to be rather substantial and even the petit fours are rather elaborate. The one downside of getting the five course menu at the bar is that you have to gaze at three rather attractive hams hanging from the ceiling and occasionally being sliced for people who’ve ordered it from the a la carte menu. It’s a hard life.

What did my five course menu comprise?

Also served was excellent house-made soda bread and butter. There was also the option of a supplementary course of Orkney scallop; it sounded very good but at an extra £18, I passed without much of a twinge.

For pictures of the food and the restaurant please click on an image in the massive gallery below. Or scroll down for more comments on my sense of the meal as a whole.

This was out by the pavement—I wonder how many random passers-by they actually snare.

Also out by the pavement. 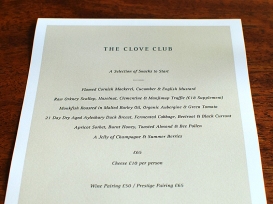 This woke my palate up wonderfully. 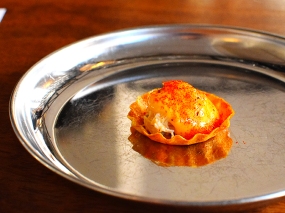 No, you don’t eat the pine needles. 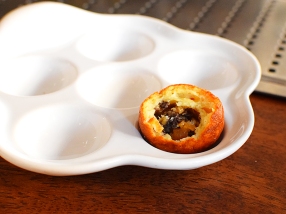 Very deft touch but left me a bit cold flavour-wise.

There’s an “access panel” cut in the side, and you use a toothpick to fish out the pre-cut sections. 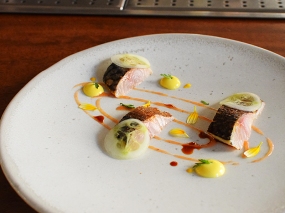 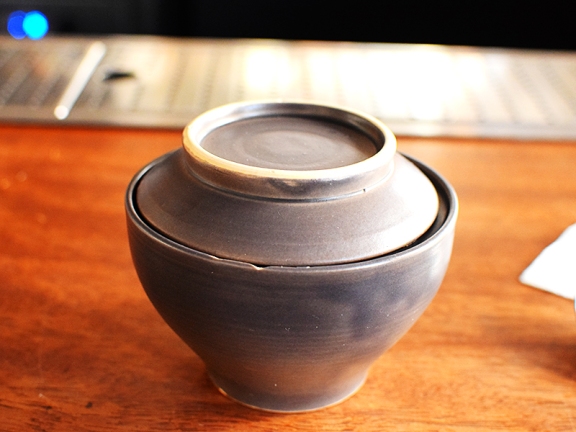 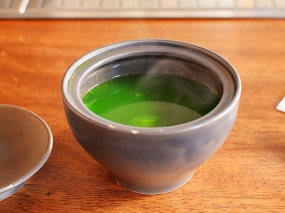 This was very nice but it was a bit of a non-sequitur. 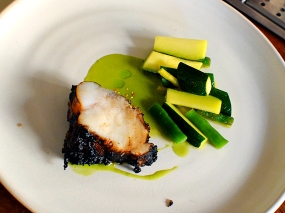 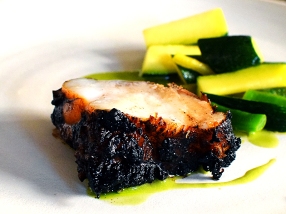 A closer look at the char.

The knife has their triangle logo on it. 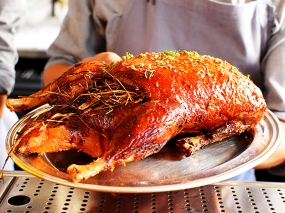 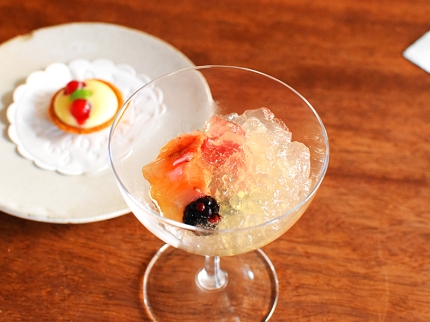 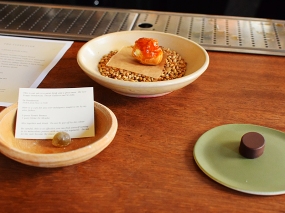 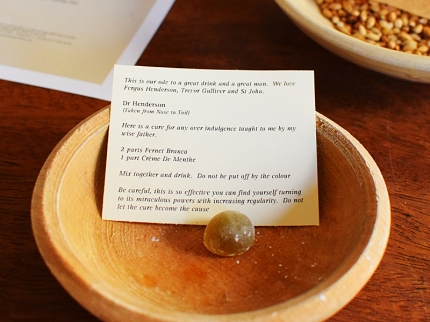 A touching tribute to a local hero: a cocktail recipe from Nose to Tail presented here as a bonbon with liquid filling. 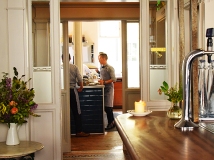 From my seat at the bar.

The lounge area around the bar. 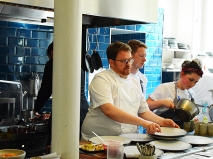 I *think* that’s the executive chef.

Note absence of table cloths and presence of t-shirts and small child.

As you can probably tell from the above, this elaborate menu’s hallmark is a kind of globe-hopping eclecticism. I dined the following night at Noble Rot with a London-based foodie who hadn’t yet eaten at the Clove Club and when he asked me what kind of food they serve, the best I could come up with was “contemporary cheffy restaurant food”. On the plus side this means a variety of types of dishes and flavours and textures—the kitchen clearly gets to show off its familiarity with a range of preparations and cuisines—and quite a lot that’s unexpected; on the other hand, it also ends up as a somewhat disjointed meal on the whole. This is largely because the front end of the meal—in my case the “selection of snacks” and the flamed cornish mackerel from the five courses proper—jumps all over the place. From the monkfish through the dessert it was actually a rather traditional progression and a more focussed meal. As to whether this sort of an observation has any relevance in the current fine dining milieu, I’m not really sure. I have to confess that I did enjoy every part of the meal rather a lot even if it didn’t all add up to a coherent whole.

As I was still quite jet-lagged I did not drink any wine or cocktails—as noted above, I’d only woken up an hour before this meal; it was my breakfast and lunch both. The bartenders were whipping up some very attractive cocktails for less reserved diners and if I ever come back I will have to imbibe. My final bill therefore was £65 plus tip (I can’t recall if the service charge was added on automatically). Quite expensive but it did not seem out of keeping with what I ate.

As for the service, some of the servers were a little too mannered in the presentation of dishes. At the bar at least you have no fixed server as such. Different courses were brought out to me by at least six different people, who included servers, chefs and bartenders. All seemed equally capable of explaining the food—though some of the servers were rather earnest young men who bent down and whispered the descriptions with a sort of hushed urgency that suggested they were delivering the launch codes for nuclear missiles or relating symptoms of an embarrassing disease over the phone in a crowded place—so much so that on occasion I had to ask them to repeat themselves.

But I don’t want to make the restaurant seem stuffy for it is not. Every staff member does address you very formally but there’s an easygoing feeling to the place. I don’t say this merely because I was at the bar with two personable bartenders with whom I chatted more and more as the meal went on; after I was done I walked about the restaurant a bit and took some pictures (after asking politely first) and the atmosphere in the main dining room was also rather pleasant—there was even a table with a small child. (And the open kitchen was surprisingly calm given the number of chefs and servers moving in and out.) While the staff dress in formal livery there are no table cloths and no dress code—and there were people in t-shirts in the main dining room.

On the whole, a fine meal and when I’m back in London next spring for a much longer stay there’s a good chance I’ll come back with the missus. The menu does change regularly and it’ll be interesting to see what they’ll have in the spring.

One thought on “The Clove Club (London)”