Two weeks ago we were stuck at the airport in Montreal. We’d missed our early morning flight back to Minneapolis, couldn’t get another flight until much later in the day, and were distraught about missing Halloween with our boys. Now it’s Halloween every day and I’m thinking we should have just stayed there and sent for the boys and the dogs. Oh Canada! If it were only possible for me to move my entire whisky collection without having to pay colossal duty on it, I’d look seriously into moving north. Ideally, to somewhere within easy reach of Montreal, which has become one of my favourite North American cities to eat in.

This writeup is of our first meal in Montreal on the evening of arrival at the end of October (see here and here for my write-ups of a visit to Jean-Talon market the next day). I’d asked for recommendations for places with good Montrealer food that wouldn’t be too heavy (after a day of work and travel) and my connections suggested Le Comptoir on the Plateau (one of Montreal’s hipper neighbourhoods, home to a number of popular and well-regarded restaurants). I’d made a late reservation so as to give us time to get to the hotel and rest for a bit; as it happened, Delta got us in quite late and so we just about had enough time to drop our bags off and rush to the restaurant. I’m not sure that the rush or the reservation were in fact necessary. We got there at 9.30 (on a Friday night). The restaurant was busy but not full and no one asked for a name when I said we had a reservation. But I’m glad we went as it was a very good meal, and a very good start to our short trip.

The restaurant was opened in late 2010 by two brothers Segue and Noe LePage. Segue LePage is the chef—I assume his older brother runs the operations end of things. It bills itself as a place for charcuterie and wine (mostly natural wines) and it’s on the basis of the charcuterie that it made its reputation. LePage, if interviews are to be believed, is a bit of a charcuterie classicist and there’s nothing very nouveau in any of the selections (all house-cured) that we were served. (They’ve since opened a separate “sausage factory”, The Reserve Desk.) Charcuterie may be what they hang their hat on but the cooked food coming out of the open kitchen is rather good too. It’s in a sort of modern bistro tradition. A small plates menu, of course, but there was no foam or froth or anything tweezer’ish on any of our dishes; instead, reduction sauces and a lot of butter.

As for the space, it is a casual and loud dining room, centered around a counter (as you’d expect from the name) that also houses the small, open kitchen; some tables as well—rustic, blonde wood everywhere.  And casual, friendly (and bilingual) service. The menu is scrawled in French on a large board behind the counter. But if you’re at a table (and presumably at the counter too) you can ask for an English menu, which for some reason bears the title “Evening Formula”.  The menu is small: other than the charcuterie there were 10 savoury courses and then three choices for dessert (of which only two were available by the time we ordered).

We asked our friendly server for some guidance and she said most couples get between 4-6 plates to pass. We got the small charcuterie platter, four more plates and split a dessert and it was more than enough food. In fact, if it hadn’t been so long since our lunch it might have been way too much food. And the “small” charcuterie plate makes me worry about the size of the large version: there was enough on the block that was set down in front of us for four people to happily nibble on. (Not that we were unhappy to eat it all: the charcuterie was uniformly excellent.) Dishes, by the way, seem to be sent out in fairly random order with no correlation with where in the menu they were listed.

What we ate (in order of service):

For pictures, launch the slideshow (more comments follow below). 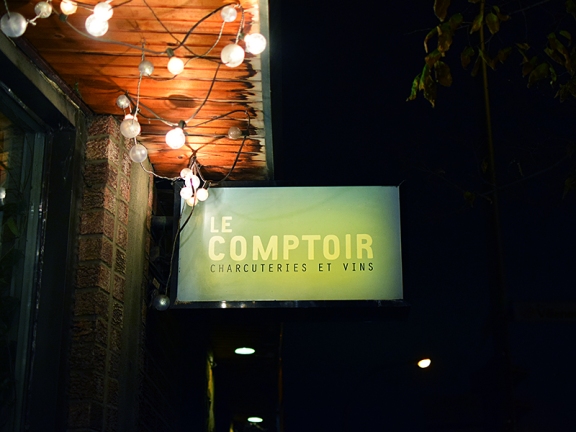 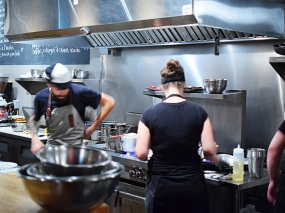 Excellent work being done in a very small space. The cold kitchen is downstairs. 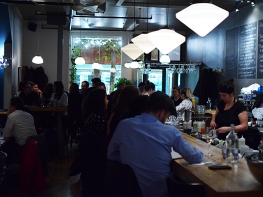 Another view; this picture was rather dark; I brightened it up in Photoshop, leading to the appearance of daylight outside.

On the wall in the counter area.

To accompany the charcuterie.

This was the small platter. 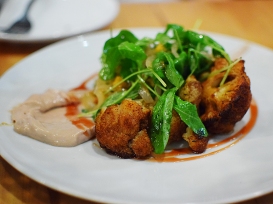 A slightly closer look at the perfectly cooked cauliflower.

Closer look at the agnolotti.

And a closer look at the brisket. 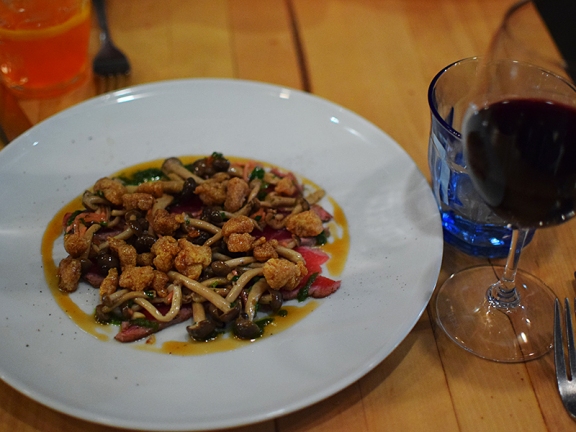 The sweetbreads were dynamite.

In case you’re wondering where the veal is.

With the olive puree beneath.

Oh yes, we got a couple of cocktails to start and I had a glass of wine as well. I wish I could tell you what exactly they were; I assumed they’d be on the website menu but as it turns out it doesn’t list cocktails or wines by the glass. My cocktail was a whiskey sour and the missus got a spritz of some kind: both were too sweet.

All of this came to $117 (US) with tax and tip. Or roughly $59/head. Please consider that we spent $75/head for a ho-hum meal at Heirloom in St. Paul. This was roughly five times better. In fact, if transplanted to the Twin Cities this would be one of the best restaurants in town. Now I get that Montreal is a far older city with a strong French gastronomic tradition, but as a frequent commenter on this blog, Joe, recently noted, the populations of the Twin Cities and Montreal metros is about the same; yet the fine dining scene here in a similar vein is far inferior. Le Comptoir, again, is almost a neighbourhood wine bar; the tiny hot kitchen is located behind the dining counter. Most people will tell you that the charcuterie and the selection of natural wines is the main reason to go there. And yet they put out food of a quality that many of the top Twin Cities places would be hard-pressed to match. I’ve no idea how the comparison would go (especially relative to price) in a city like New York.

Anyway, this was the first of three very good dinners. It was surpassed by the other two we had (at Joe Beef and Hotel Herman) but on the strengths of this meal I would urge you to put it on your list if you’re looking for a casual meal in Montreal. If we lived in Montreal we’d be regulars.

One thought on “Le Comptoir (Montreal)”