Our first visit to Mori was almost a year ago—it was our very last meal out in 2015 and it was one of the best meals we ate all that year. It was not cheap—the most we’d spent on a sushi-centered meal so far. It was, however, an excellent meal—by far the best sushi we’d ever eaten and we knew we wanted to go back on our next trip in the summer (yes, it has taken me five months to finally finish writing up all our meals from our L.A trip in the summer). We’d planned to go back for lunch and eat slightly cheaper: we’d been told on our last visit that at lunch the omakase ran about $80 and served up 15 pieces of fish; that seemed like the sweet spot between our appetites and our wallets. Alas, right before we got to L.A. Mori stopped serving lunch. I thought briefly about going somewhere else for our anniversary meal but the missus suggested that we just bite the bullet and go back to Mori and just eat one less meal of sushi elsewhere in the trip. And so we did. It was very good again but the experience fell a bit short of our first visit.

Before I get to why that was and then to our meal, which was, as I said, very good anyway, let me note the very low utility of this meal report. It comes five months after the fact, in a different season and is not going to be a good guide to what you might expect of an omakase at Mori right now. In fact, the things that detracted from our overall experience may also no longer be applicable. So, if you’re looking specifically for what you might get right now at Mori this is not for you. But hopefully it will still be enough evidence that if you want to go out for excellent sushi in Los Angeles, Mori is probably the place to go. We were happy, by the way, to see how full the restaurant was at our meal—it had been quite empty at our previous dinner and I’d read other reports too that noted this. While we were the only ones at the bar there were a number of large groups at the tables, including one large Japanese group whose sushi was being prepared exclusively by the head chef.

What were the shortcomings at this meal? Well, it has nothing to do with the quality or variety of the fish. The main difference was the confidence level of the chef serving us. At our previous dinner we were in the hands of Chef Yoshi, who was essentially entirely autonomous and also a very gregarious and warm presence. Unfortunately, Yoshi is no longer at Mori (we were told a few nights previous at our dinner at Kinjiro that he had moved to Kiriko—I’m not sure if he is still there). His replacement was a much younger chef at a very different point experience-wise. He often seemed unsure of what he should do in terms of sequence and pacing and the head chef intervened on more than one occasion to tell him what to give us next and also to tell him how to prepare particular fish. He also did not have as deft a touch with the saucing. If you compare the pictures of this meal with those from the previous you’ll see what I mean (compare, for example, the saucing of the kohada). He was also not very talkative, perhaps because his English is not quite as fluent as Yoshi’s (this would, of course, not be a problem for Japanese speakers) and many of our questions about the fish were answered by the head chef.

This actually had an unexpected positive effect on our meal in its own way. You see, we’d asked—as we do these days—that the meal not feature any bluefin tuna (more on this below). Our chef was confused by this request and when he conveyed it to the head chef he seemed put out as well and told us that we shouldn’t expect more than 19-20 pieces in our omakase. I said to our guy that he could just give us more of other things but I didn’t seem to quite get through. Anyway, as we asked questions about the first few pieces of fish we were served the head chef, who fielded most of them, began to warm up to us and then remembered that we’d been there 6 months previous (and that we’d sat with Yoshi!) and his demeanour changed. As it happens, we ended up getting a couple more pieces than we had received at our previous dinner

Here’s what we got (where not specified the fish was all Japanese): 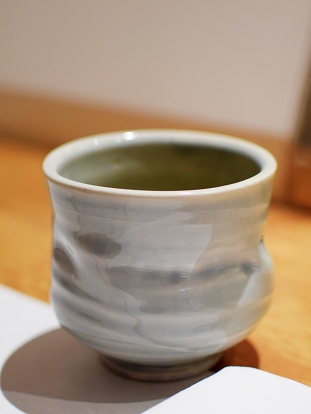 Their ceramics are all made by the original head chef/owner, the eponymous Mori. 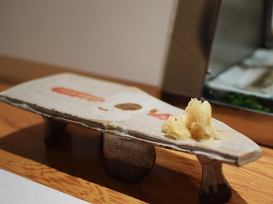 The art behind the bar had changed since December. 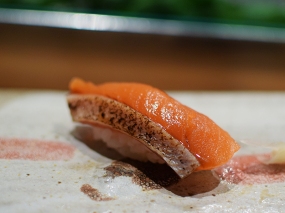 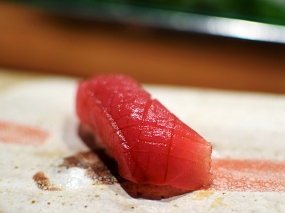 Gizzard shad with soy sauce pooling on the bottom… 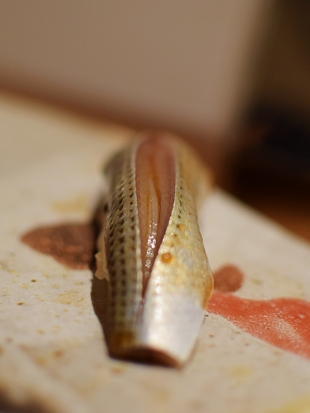 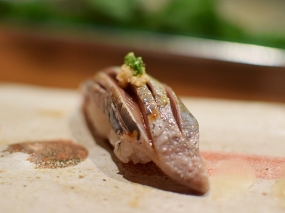 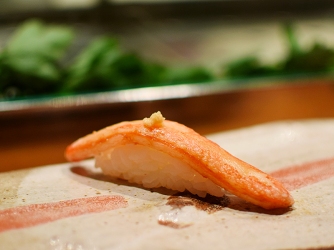 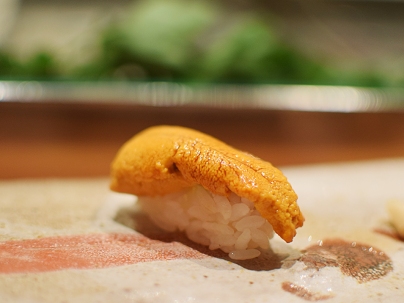 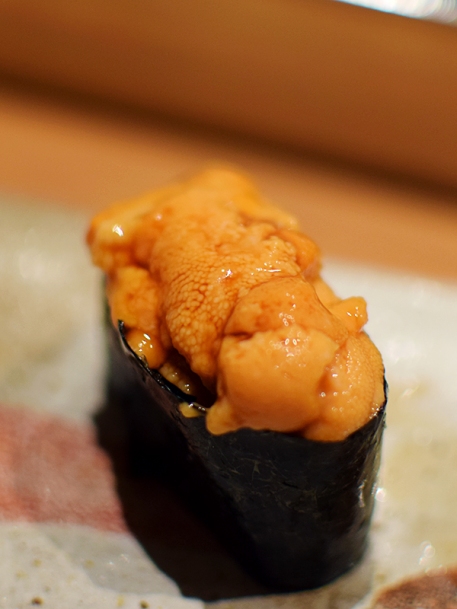 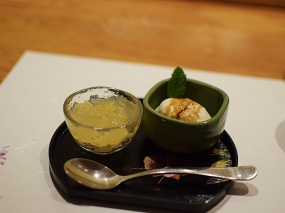 So, some repeats from our previous meal but also many new things. We were a little bit disappointed not to have been given any handrolls on this occasion as those had been highlights last time. But it’s not like we were disappointed with the meal we had. The service/prep issues that I noted may seem, as I said, like nitpicking but at $160/head (which is what this turned out to be before drinks, tax and tip—prices have gone up since last December) you are paying for a higher-tier experience which does include a finer attention to detail. That said, I don’t mean to give the impression that I am an exacting sushi connoisseur. While my ability to make distinctions develops further with every high-level meal many (most?) of the nuances are still beyond my ability to discern (the logic of the particular order of fish we were served, for example). Anyway, our next trip to Mori will be on our next trip to L.A and next time we’ll be sure to ask to be seated in front of Head Chef Maru.Though by this point the younger chef is probably completely up to speed.

Oh yes, I’d said I’d have more on the bluefin tuna issue down here. Here it is: based on the reactions that chefs at the better sushi bars in L.A have to our bluefin prohibition it seems quite clear that sushi aficionados (in Los Angeles at least) are not on board with avoiding bluefin. I’m curious about what the discourse around this is like among sushi eaters in other major cities (and also in Japan). My understanding is that bluefin tuna remains highly endangered—is this not true? I don’t mean to sound virtuous about this—after all, it’s only very recently that we’ve stopped eating it ourselves—but I’m curious about how people negotiate this issue. And do feel free to tell me if any/many of the other fish we ate are also endangered.