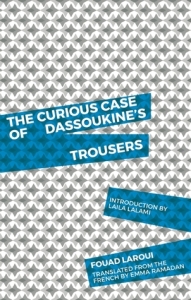 The stories in The Curious Case of Dassoukine’s Trousers, the first English translation (by Emma Ramadan from the French) of the work of the Moroccan writer Fouad Laroui, are not united by setting: they take place in Casablanca, in Brussels, in Paris, in Utrecht. Nor are they united by form: in “Dislocation”, a repetitive, cumulative structure takes the reader into the mind of a man on the verge of psychic collapse; “What’s Not Said in Brussels” presents the same event from the point of view of two characters; “Fifteen Minutes as Philosophers” takes the form of a play; “The Night Before” recounts a nightmare; only the title story, perhaps, closely resembles what most people expect a short story to look like. What unites them is a comic sensibility. They don’t easily yield meaning or answers to the questions they pose but each makes you want to keep reading, both for the intellectual play and for the sheer verve of the storytelling.

This storytelling  is always foregrounded. Five of the nine stories are presented within framing conversations that take places in cafes or restaurants in Brussels, Paris or Casablanca, as narrations within narrations. In the case of the title story, which kicks the collection off in great style, the narrator of the main story, Dassoukine himself, is able to get going within a few paragraphs. In others interruptions and parenthetical asides threaten to derail the story completely: on the third page of “The Invention of Dry Swimming”, the primary narrator thunders, “This is my story, let me tell it or I’ll keep quiet and never open my mouth again!” But it’s two more pages before he can continue and even then Laroui keeps pulling us out of the story, the particulars of which in any case are too absurd to allow suspension of disbelief. In “Born Nowhere” the narrator is first told a story in a cafe by one character and then recounts that same story to another character who enters the cafe after the other leaves and who comes to different conclusions about it (which the narrator does not endorse). In the stories that do not follow this “shaggy dog in a cafe” structure as well the reader is always aware of form.

The effect of this foregrounding of form is, as is often the case, a kind of distancing. This is not a bug but a feature in what Laroui is up to. Some commentators have referred to the oral quality of many of the stories but I think that’s wrongheaded (and probably a bit culturally lazy). The attempt here, I think, is not to return to or evoke some Moroccan mode of storytelling; the use of conversation as framing, and of interruptions, gestures instead towards the contingent nature of storytelling and of language. That’s the effect on me at any rate. His stories turn on displacements—in some cases geographic, as migrant characters find themselves in places that look upon them with suspicion, in some cases historic, as characters try to trace the absurd puzzle of postcolonial identity, personal and national, in absurdist stories of the past—and he is, I think, unwilling to give the reader a firm place to stand. The stories all call for decoding; we are asked to enter the conversations of the stories but in most cases must figure out what they mean on our own.

In other words, this is not the book to look to for information, cultural or historical, on life in Morocco or in the Moroccan diaspora in Europe. I don’t mean to suggest that the Moroccan characters or settings of (most) of these stories are incidental or that the stories do not evoke a milieu—the Casablanca stories in particular do. It’s more that the framing of the stories and the ironic mode in which most operate resist a desire for simple cultural mirroring. These stories are primarily driven by ideas, as they are with Borges, who many of these stories elliptically called to mind. As with Borges, you will not be bored in pursuing them.

That is not to say I liked them all equally. My favourites were the title story, “Khourigba or the Laws of the Universe”, “Bennani’s Bodyguard” and “The Invention of Dry Swimming”. It may not be a coincidence that these are the funniest of the lot.  I admired the form of “Dislocation” more than I enjoyed it—and I found the conclusion of the story a little trite. And the satire of “The Night Before”, the shortest of the stories, which closes the collection, seemed a little too on the nose compared to the others—this is not a problem per se, more an issue of juxtaposition.

It is entirely possible that the above has not been a very inviting advertisement for this book. If so, I urge you to read the title story which is available here. I think it will make you want to buy the book. And if you do choose to buy the book, you should look to your local independent bookstore (for example, the excellent Content in my town). If you don’t have an independent bookstore within easy reach, there is no shame in buying it from Amazon (though I would say that as I will get a small kickback from any purchases made from this link). You may also want to read this interview with Laroui and Ramadan, and this one with just Laroui—he’s a really interesting guy.

One last thing before I end: The Curious Case of Dassoukine’s Trousers is published by Deep Vellum Publishing, a nonprofit based in Dallas that seeks to advance the cause of translations in the US. It remains the case that far, far fewer translations are published in the US than in most European countries. In France the percentage of publications annually that are translations is close to 20%; in the US it’s in the low single digits. What this means is that it can take 20 years for a writer of Laroui’s stature—he has won a number of major awards in France since his debut in 1996—to even become available here. And who knows how many other major writers are out there that we will never get to read. It’s a terrible irony that in this globally connected world market forces should work to drive cultural insularity in the US (though considering our political environment this is perhaps not surprising). Please consider supporting organizations like Deep Vellum as well (details are available on their site).