On Saturday we went up to St. Paul to take in some of the 4th Annual Little Africa Fest. It was held in Hamline Park, at the corner of Lafond and Snelling (free admission). There are quite a few African restaurants and businesses in the area and there’s also a sizable immigrant African population: Somalis and Ethiopians, in particular, but also Eritreans and immigrants from various west African nations. This is a part of the Twin Cities that we have not previously seen much of or interacted with and we’re eager to close that gap. Our town in semi-rural, southern Minnesota is not remarkably culturally diverse (though there’s more diversity here than most might imagine) and as our kids get older it becomes more and more urgent for us to get them to see Minnesota as not just a sea of whiteness. Fortunately, the Twin Cities offer plenty of opportunities to expand cultural horizons.

I’m not sure if the Little Africa name is official for the neighbourhood or if it is used more informally by AEDS (African Economic Development Solutions), the business group that organized the festival. I do know it’s of relatively recent provenance and that when it was first proposed there was at least one prominent Ethiopian business (the restaurant, Fasika) that seemed less than enthused by the more general designation (see this report). It’s a complicated matter, I guess. Many of these home nations do not have happy histories with each other and members of the diaspora may have good reason to be ambivalent about being grouped together. On the other hand, given the demographics of Minnesota, the strength of collective numbers can only be a good thing. Anyway, as someone who doesn’t know much about the politics of this stuff on the ground in St. Paul, I shouldn’t say much about it. Let me instead give you my impressions of the festival as we saw it.

It ran from 2 pm to 8 pm on Saturday and, luckily, it was a wonderful day: dry and sunny, in a week that had seen a lot of rain. We were there from roughly 4.15 to 6.15. Good friends live just a few blocks away—we parked at their place and we all walked down together. We were greeted as we approached by the sound of music. A Somali dance troupe was finishing up just as we got there. The stage was set up at the top of the little hill in Hamline Park; people, sitting and standing, ringed it at some distance at the end of the slope. Kids played in the playground; a group of young men were playing basketball alongside. By the basketball court were a handful of stalls selling jewelry, clothes, paintings etc.; interested parties could get henna tattoos. On the other side of the park were the food vendors. There weren’t very many of them when we were there: only three, in fact, but the food was very good. At least three different candidates for the St. Paul mayoral race were in attendance (Melvin Carter, Dai Thao, Tom Goldstein), talking with voters. The crowd was a little thin at 4.15, but began to pick up slowly. Pictures of the event on Facebook suggest it kept growing as the evening went on.

There were some technical problems on the stage when we got there but things kept moving and the organizers’ enthusiasm did not flag. The crowd, however, was not terribly energetic at first. This particularly taxed the patience of a musician from Mozambique who was not used to playing without people dancing and singing along in front of him. A large part of this, I think, was down to the layout. The stage was at the top of a mini-hill which made it hard to get too close. We tried to go up and sit in front of him and even that was difficult. The other issue I think is that the 2 pm to 8 pm duration probably resulted in more diffuse attendance. Having the event go instead from 4 pm to 8 pm might put more people there together earlier and raise the energy/engagement levels. Again, I’m sure the energy was much higher closer to the end: pictures on Facebook from later in the evening show more people dancing and so forth. It would also have been good if a program had been clearly listed or handed out as leaflets. If you missed the introduction of the acts—as we did each time—you’d have no idea who they were.

All that said, it was a lot of fun even when we were there. The performers were energetic and the music in particular was very good. The dude from Mozambique might have gotten a bit frustrated with the audience but it was a treat to listen to him. Ditto for the group that had just begun a 45 minute set as we got ready to leave. It was also very good to see the community out in force. The majority of the audience was African (I couldn’t say which nationalities were more heavily represented) but there were a decent number of people from the neighbourhood of other races, including some who were evidently eating Ethiopian food for the very first time.

Here are some pictures (snapped on my phone so please excuse the poor quality). Scroll down for a few closing thoughts.

It’s not easy to tell the slope from this picture.

Audience at the bottom of the slope from the stage.

Another shot of the audience.

A performer from Mozambique; he played a few traditional instruments that I’d never heard of before. 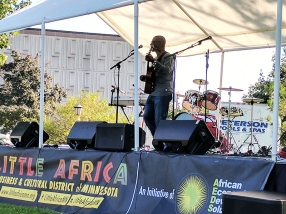 I missed the introduction and so don’t know his name or where he’s from. 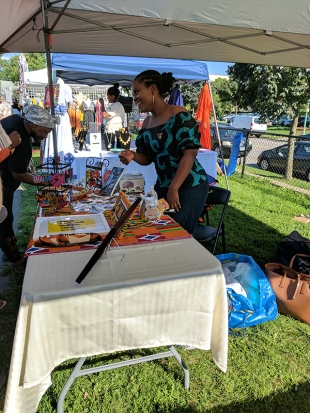 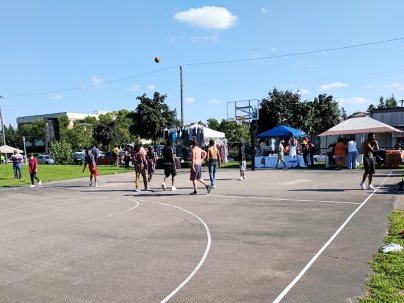 I like basketball but I can’t help thinking that it would have been better if these pickup games had not been going alongside the festival with the ball occasionally crashing into people shopping at the adjacent stalls.

Somali, I think. We didn’t get anything from them but…

…I am happy to help spread the word of the opening of their restaurant. 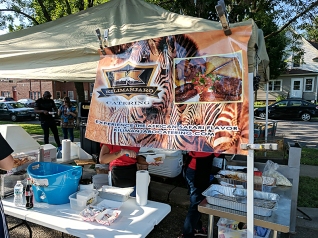 A catering operation with some Kenyan foods.

The samosas/samboosas were very good if not very different from the Somali versions we’ve had. The sausage was described as Kenyan sausage.

Not sure what was Kenyan about it but it was good and the boys ate a lot of them.

They also had seasoned fries which we did not try. 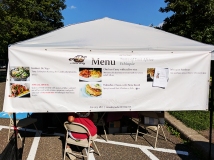 Another catering company, this one Ethiopian; they had a limited food offering as well. 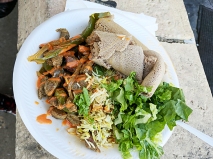 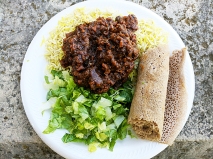 This chicken curry was dynamite, though it could have stood to be a little warmer. 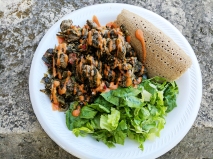 A very tasty dish of beef and collard greens. The spicy sauce on this and the tibs was very good indeed.

The Little Africa Fest seems like it’s still very much in its early days. But I hope it’s going to remain an annual fixture: it can only go from strength to strength. I do think making the duration a little more compact will help keep audience numbers at a critical mass throughout. It will also be good to see a few more food vendors. I was surprised that Fasika and the other  established restaurants in the area had not set up booths. And some dedicated cultural activity for the kids would be great too: our boys enjoyed the music and the free rock climbing wall but some storytelling or something along those lines would have been great too.

Regardless, if we’re in town we’ll be back next year for the 5th Annual Little Africa Fest, and if you live in the Twin Cities or within easy reach I’d recommend that you come too.

(Thanks to the excellent Global Twin Cities Facebook page for alerting me to this event. If you live in the area I’d highly recommend that you follow them.)