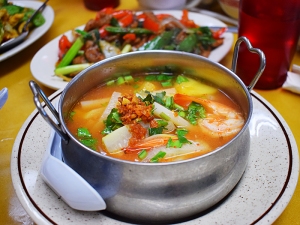 Cambodian cuisine does not have a very high profile in the US. I’m not aware of any city that is reputed to have a significant Cambodian population, leave alone a significant Cambodian restaurant presence. Well, the greater L.A. metro area, probably, but even there there isn’t much talk of South East Asian cuisines beyond Vietnamese. While Minnesota’s Cambodian population is quite a bit lower than its Hmong and Vietnamese populations, we do have the fifth highest Cambodian population in the US outside California. As far as I know, this population is only represented by one major Cambodian restaurant: the venerable Cheng Heng on University Avenue in St. Paul. A Cambodian island in a sea of Thai, Vietnamese and Lao eateries, Cheng Heng has been around longer than most of them—about 21 years now. I’m embarrassed to say that even though this is our 11th year in Minnesota, we only just got around to eating there this past weekend. And I’m very sorry we waited this long as we really enjoyed the meal.

Located a block or so away from Thai Garden on one side and Trieu Chau on the other, Cheng Heng is a much larger restaurant than we were expecting or it appears to be from the outside. There’s a small parking lot to the left and street parking in front. You enter through an unassuming glass door to find yourself in a large’ish foyer with two decent-sized dining rooms on either side. The ambience is largely functional: there’re some Cambodian signifiers in the entryway and on the walls but that’s as far as it goes. It’s a bright space though with tables nicely spaced. Importantly, the food is very tasty.

As I don’t know very much about Cambodian cuisine I enlisted the help of the internets and friends who’ve travelled in Cambodia and discovered that what I had suspected is probably true: that Cambodian food is in a continuum with Vietnamese, Hmong and Thai food. It makes complete sense that this should be true: cultural flows rarely respect relatively recent, artificial national boundaries. And given the demographics of the broader South East Asian community in St. Paul—our server told me that they only get an appreciable Cambodian crowd on weekends—there’s also pho and such like on the menu. The Cambodian menu at Cheng Heng is extensive, however, and if you haven’t done any “research” to try to gauge which those dishes are and what they’re like, the friendly servers are only too happy to explain and offer guidance. (The menu also has pictures.)

We were a large group: our usual group plus three more made up a table of 11 (nine adults and our brats). Well, it was two tables pushed together. We ordered a fair bit of food and devoured it all. I think I speak for the group when I say that we liked everything a lot. There was only one thing that didn’t make too much of an impression on me but others in the group liked it more. I am certainly in no position to opine on the authenticity of the flavours here but the cooking was good. To see what we ate, launch the slideshow below. Scroll down to see how much all this cost plus comments on service etc. 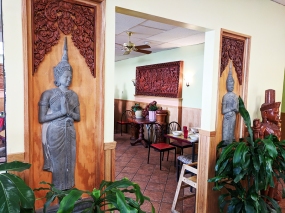 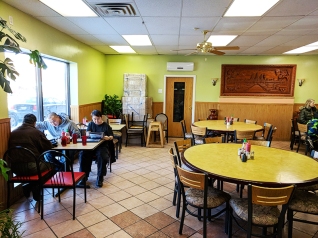 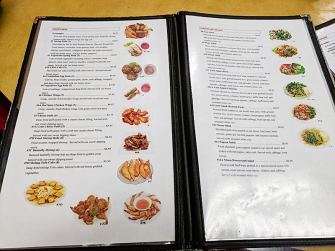 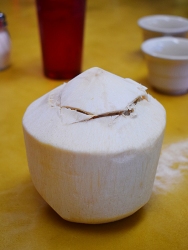 One of the great pleasures of this world.

Don’t forget to scrape out the cool sweet flesh after drinking the water. 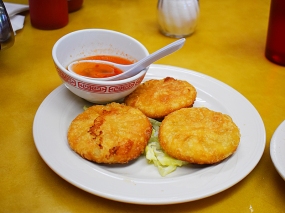 Would be at home on any good dim sum house’s menu. 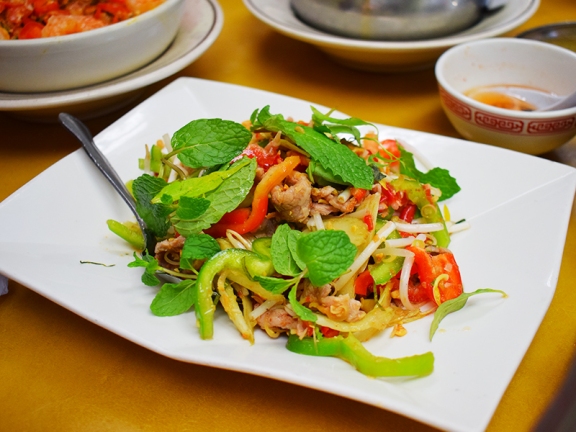 Sliced beef with veg in a tangy, hot dressing.

Pork skin salad with a sweeter dressing and a fair bit of heat.

The cleanest, brightest flavour on the three salads

This stir-fry was the only one that didn’t make much of an impression on me. It was tasty but somewhat generic.

I much preferred this one with a red curry sauce.

This is apparently a quintessential Khmer dish. You can’t see it but there’s glass noodles at the bottom. Despite the redness this was not particularly hot. It was very tasty, however, and the beef was cooked perfectly. 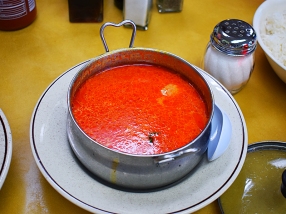 A generic name but this red curry soup (eaten with steamed rice) of chicken and potato was very tasty indeed. 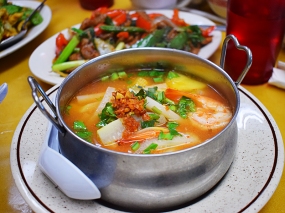 A sweet and sour soup with shrimp and tender lotus root. Very nice.

Often transliterated as “amok” this is another quintessential Khmer dish and not identical to the Thai version as served at On’s Kitchen further up University Ave. 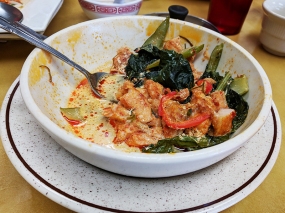 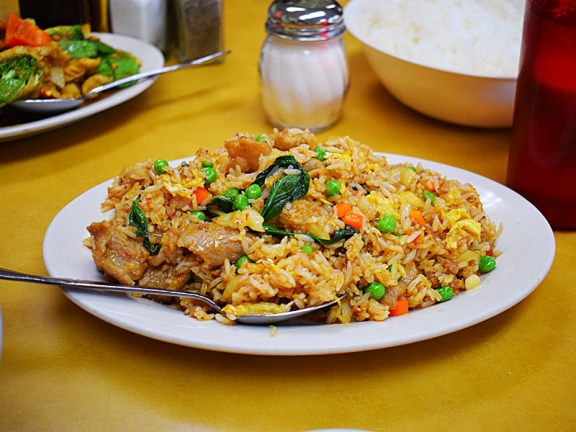 Pahok ktiss sauce is a staple of Khmer food. It made this fried rice a little greasy but it also made it very tasty.

This was for the boys and they devoured it.

It came with this broth.

My favourite dishes were the pork skin and tripe salads, the ho-mok, the machu Angkor and the fried rice with pahok ktiss sauce. But really there was nothing I did not like. By the way, the salads—which were not identical in flavour—were the only dishes with appreciable heat (and I’d asked for things that were meant to be spicy to be made spicy). The only things that evoked ambivalence were the bubble teas.

All in all, we got a lot of food: two orders of the chive dumplings, three salads, two stir-fries, two rice dishes, two orders of the ho-mok, and three more large soup/curry dishes. Plus five young coconuts, two bubble teas and a Sprite. All of this with tax and a very generous tip came out to just above $21/head. Frankly, I think they should charge more. This is not something that is in great supply in our area and our meal here was superior to our meals at Thai Cafe and Thai Garden—both of which we’d enjoyed as well. Indeed, I look forward to coming back soon to try even more of the menu. If you haven’t been there yet either you should go too.

Okay, back to Los Angeles on Thursday for some sushi. My next Minnesota review will likely be of a non-South East Asian restaurant, though not one very far away from Cheng Heng.