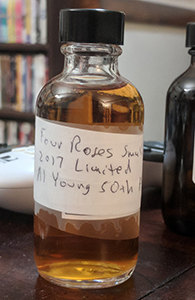 Almost exactly a year after my review of the 2016 Four Roses Small Batch, Ltd. Edition, here is my review of . a limited edition small batch release from last year to honour the 50 years of service of brand ambassador Al Young. This is not the annual release Small Batch Ltd. Edition, which came out later that year. In that series I’ve previously reviewed the 2010, 2012, 2013 and 2014 releases as well; if anyone wants to send me samples of the 2011, 2015 and 2016 releases so I can round out my reviews for the decade so far, please get in touch.

Nose: Fried plantain, orange peel, light maple syrup and honey to start. On the second sniff there’s corn and rye and pine and a cluster of herbs (dill, mint, parsley). Gets stickier as it sits and there’s some leather too now. With water there’s some butterscotch.

Palate: My first impression is that the mouthfeel is a bit too thin/flat. Flavour-wise, it’s more or less as promised by the nose with more oak and less of the richer sweet notes. More peppery with each sip but the oak never gets too much. With more time the corn seems to beat out the rye on the palate and it becomes a little one-dimensional. Water brings out more oak and tamps the rest of the stuff down.

Finish: Medium. The spicy notes hang out the longest but there’s nothing interesting here. Longer with water but no more interesting.

Comments: I’ll say again that Four Roses is the single malt drinker’s bourbon. Though I wouldn’t say this tastes like a sherried malt, it somehow ticks many of those boxes for me. That said, I liked the nose much more than the palate here and the finish was a little blah. It’s certainly an elegant bourbon but I don’t know that I’d pay the premium for this (assuming there was one) over the better regular store-release single barrels. And I’m certainly glad I didn’t have to jump through hoops to get to taste it. As I said of the regular 2016 Small Batch Ltd. Ed. release, I’d take a few Henry McKenna BiBs for what this would have been at retail.