There was no way I was going to go to the Speyside and not stop in at either of the region’s two most historically significant names. The most significant distillery, of course, is Glenlivet. But Glenlivet was just a bit too far out of the way for our mostly non-whisky-obsessed group. Glenfiddich has the added attraction of being situated right by the ruins of Balvenie Castle. And so it was an easy choice to go to the distillery that pioneered the marketing of distillery-released single malt whisky in the early 1960s. Accordingly, we drove right there from Strathisla. The two make for quite a contrast, especially in quick juxtaposition.

Where Strathisla is small and quaint, Glenfiddich is massive and not in the running in the “most beautiful distillery in Scotland” race. That’s not to say it doesn’t have some attractive spaces—it probably has the most spectacular women’s bathroom among all the distilleries in Scotland (or so I was told by the missus)—but it’s a massive whisky factory with a mega stillhouse (32 stills!) and warehouses; not to mention two more of the owners’ distilleries adjacent (Balvenie and Kininvie) in the same complex. They were the first distillery to open a visitor’s centre—way back in the 1960s. Until relatively recently, I believe, tours at Glenfiddich used to be free. This would have been before the whisky tourism boom began, when the largest seller of single malt whisky—by far—would have looked indulgently on those making the pilgrimage to its distillery. Now, however, few distilleries are leaving any money on the table, and Glenfiddich is not leaving very much at all: the cheapest tour costs £10 and the “bottle your own” when I visited was a 15 yo being sold for £125! Compare with the £65 being asked by Strathisla for their 15 yo.

The visitor’s centre is large and shiny, as is their shop. They also have a very large and attractive restaurant/cafe+bar called The Malt Barn, and the menu is quite fancy (consider, for example, “Glenfiddich-cured smoked salmon with barley miso, yuzu gel, barley milk and fried buckwheat”). We’d originally planned to eat lunch there but we ended up arriving a bit too early for that. Even if we hadn’t arrived early I don’t know that we would have eaten there. In the only instance of unfriendly employee behaviour I have yet encountered at a Scottish distillery, a gent at the cafe barked rudely and impatiently at one of our party who was asking questions about pastries. Unlike me, she is not an asshole (she’s also Canadian) and so I am confident she did nothing to merit such treatment. Yes, there were a lot of visitors at the distillery—unlike at Strathisla—but it was also only about 11 am and far too early in the day to be out of patience.

We walked around the distillery a bit, peeked into the shop and then repaired to Balvenie Castle. If you’re wondering why we didn’t poke our heads into the Balvenie distillery as well, it’s because they were closed for maintenance/construction. The castle is really quite lovely and a much better use of time, I think, than doing yet another distillery tour: though I suppose the scale of Glenfiddich’s setup is worth a look. After pottering around the ruins for an hour or so, we set off through the woods for Dufftown. This was about a 2 mile walk, I want to say, and was thoroughly delightful (with an unexpected view of the rear of Glendullan along the way). We ate lunch in Dufftown, walked back to our cars at Balvenie Castle and went on down to Ballindalloch for the afternoon. More on that part of the day later. For now take a look at this excessive slideshow of images from Glenfiddich and scroll down to see what’s coming next.

In the parking lot

Across the street from the parking lot is the distillery. 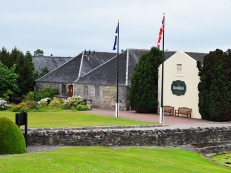 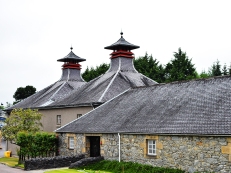 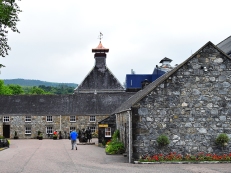 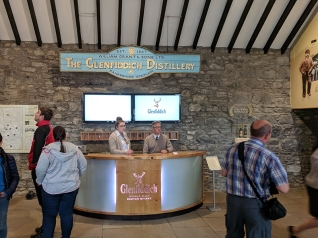 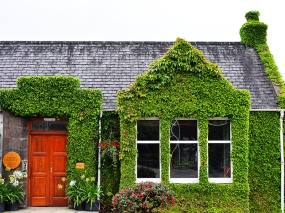 Not sure what this building is.

I think this is where the tours go. 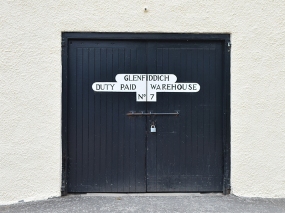 On the way to the visitor centre you pass warehouse 7. 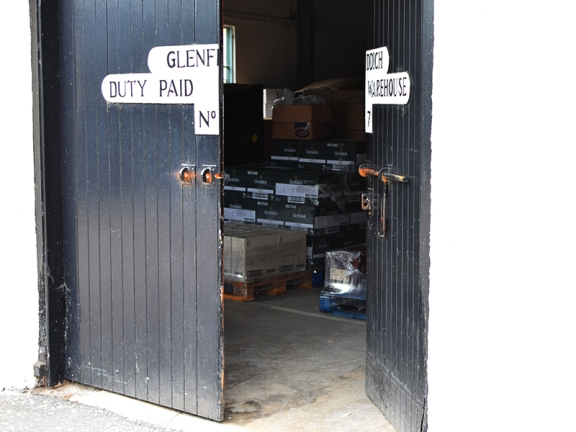 But it’s not so exciting. 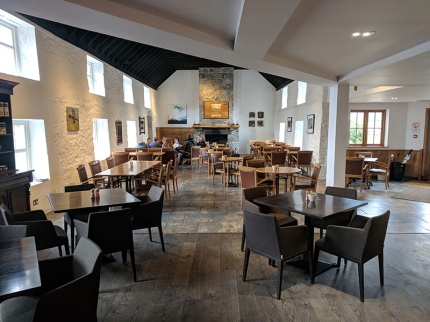 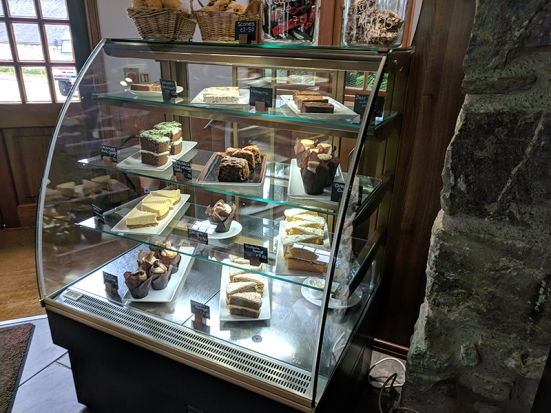 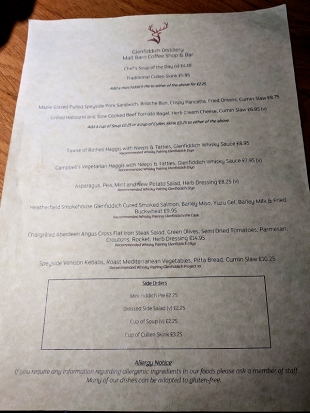 This is parked behind the Malt Barn 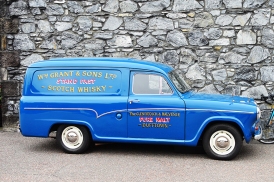 The shop is large (as is everything at Glenfiddich).

Sort of triangular, I guess. 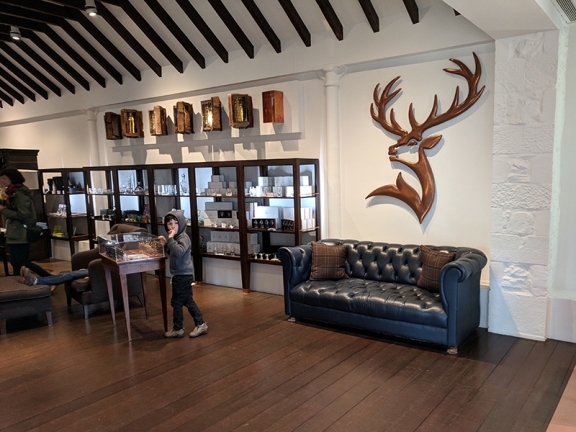 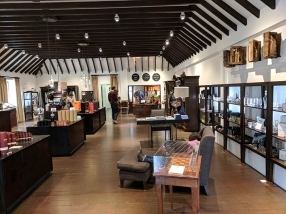 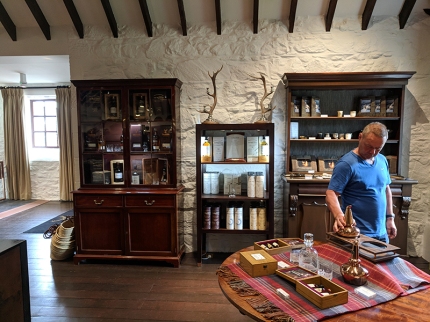 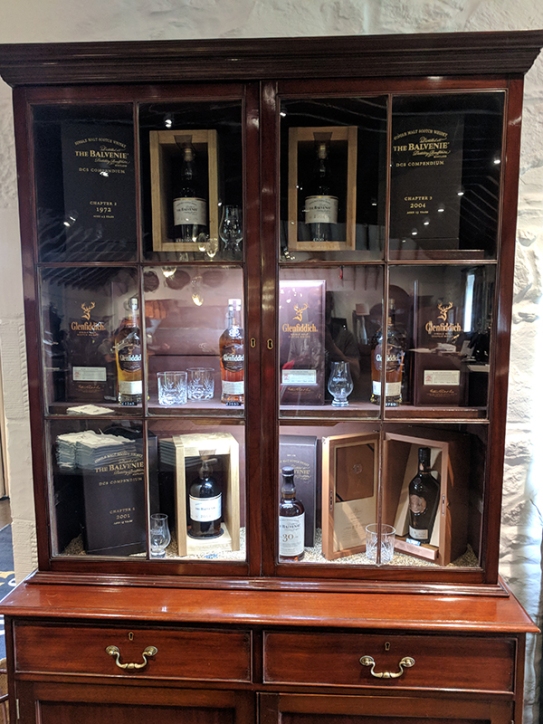 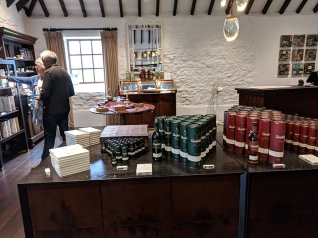 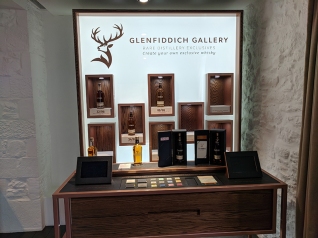 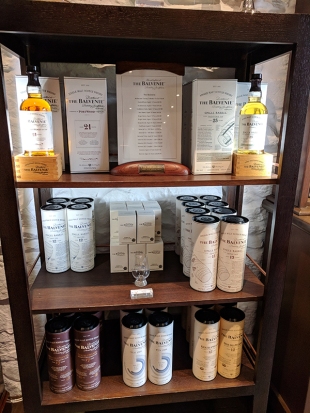 I still have three distillery reports to come from the Speyside. Next will be a very quick look at Cragganmore. After that, the one distillery I actually toured: Aberlour. Then Glenfarclas en route to Dornoch. And I also have a bunch of other Edinburgh whisky shops to report on—not to mention meals in Edinburgh and the Speyside—probably won’t get to those till next month though; I do want to finish up with the Speyside distillery reports. And, oh yes, the whisky reviews next week will stay on the relevant side of things.