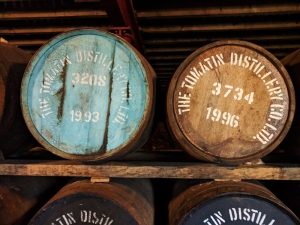 Tomatin was the first distillery I ever visited. This was last summer on our first trip to Scotland. We were driving from Glasgow to Drumnadrochit and after a nice visit at Blair Castle we had time for a quick stop at Tomatin. I wrote up that quick stop last year—we didn’t go past the shop, where I filled a bourbon cask from their “bottle your own” selection. We didn’t spend much time there but I liked the feel of the place and hoped I’d have a chance to return. That chance came on our unexpectedly early return to Scotland this June. It was on our last day, on our drive back from Edderton to Edinburgh, where we boarded a plane to London; it was raining but the distillery was warm. And thanks to Tomatin welcoming small children on the tour, my entire family was able to go on the tour with me. And they all loved it.

We were booked for the 11 am tour, which meant we could have a relaxed breakfast at our inn, the excellent Edderton Lodge, mere steps from Balblair. We checked in at the Visitor Centre/shop and paid for bookings. While waiting for the tour to start I checked out their “bottle your own” offerings. There was again a virgin oak cask, a bourbon cask, two sherry casks (oloroso and PX) and one much older cask. I came back to these at the end of the tour.

There were 12 of us in our group (counting our brats), a mix of continental Europeans, Brits and North Americans. I regret to inform that a couple of members of the party seemed like they might have already had a few drinks early on a Saturday but fortunately this didn’t result in behaviour that went past occasionally annoying. As Tomatin does not have floor maltings, the tour begins—as it does at a number of distilleries—with a verbal overview of the process before the grain gets to the distillery and then you head to the malt intake area and from there to the mash tun, washbacks and then the still house. You get to see their old defunct Porteus mill and also the replacement made to the Porteus specifications by a company in Hull.

As you may know, Tomatin has a very large production capacity—though they don’t operate at that peak capacity—and so you will not be surprised to hear that they have a lot of washbacks (all stainless steel) and a very large still house with many wash and spirit stills. After seeing the mash tun and the washbacks you go past their old decommissioned mash tun, and you actually get to walk around in it. I did this and I cannot explain why it was exciting but it sort of was. The still house, with its large scale, is a little less exciting—somehow the intimacy of small still houses with at the most two pairs of wash and spirit stills is more appealing to me. Photography, by the way, is allowed everywhere on the tour, including the still house, but you can’t take photographs when you go right up to the stills. This did not stop one of the mildly intoxicated gents on our tour and all our very young guide could do was look at him sadly. Yes, it’s a bogus rule but it’s not nice to disrespect your guide. The still house also has a tasting area set up there—I assume that’s for people doing one of the fancier tours.

Being allowed to walk around in an old mash tun is not the only thing that sets Tomatin’s basic tour apart from the others. You also get to go into the large warehouse where casks are readied for filling. Our guide explained the different kinds of casks they use and the colour coding system that distinguishes them. Here—as at Highland Park—interested parties could sniff recently emptied bourbon, sherry and red wine casks to note the differences. Right alongside is also the workshop where Tomatin’s cooper repairs and reconstructs casks. Though it was a production day at the distillery the cooper was not working on a Saturday—it was still quite fun to be among the broken down casks.

From here you go to an actual storage warehouse—the show warehouse we were taken to comes with a mock excise office complete with a mannequin of an excise officer. I assume he comes to life at night and murders whoever dares enter the grounds. There are a number of casks out in front here with their filling years marked and our boys had a great time finding casks from their birth years; and one of them really enjoyed the fact that there is a type of cask called “butt”. I was interested to learn that Tomatin warehouses casks from a number of other local distilleries and that they in turn have some of their casks warehoused elsewhere.

At the end of the tour you return to the Visitor Centre for a tasting. As we were in a hurry we got to-go bottles. They don’t make you buy sample bottles here as at Aberlour or Highland Park; but you also don’t get what the others on the tour are tasting, I don’t think. What we each got (well, the missus and me) was a 50 ml mini of the Tomatin Legacy (I reviewed it not too long after).

Here now is the customary excessive gallery of images. Take a look and scroll down for my further adventures in the shop.

Our sat nav system took us by the front entrance this time. 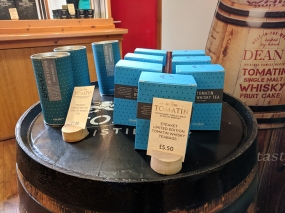 I don’t believe I’ve seen teabags at other distilleries. I was tempted but resisted. 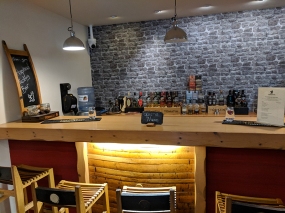 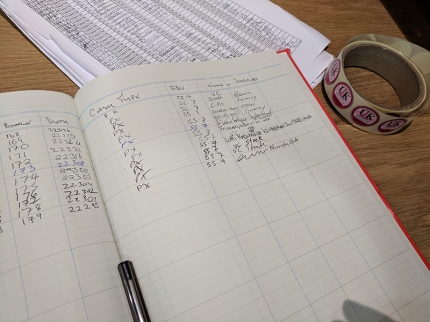 I signed my name. 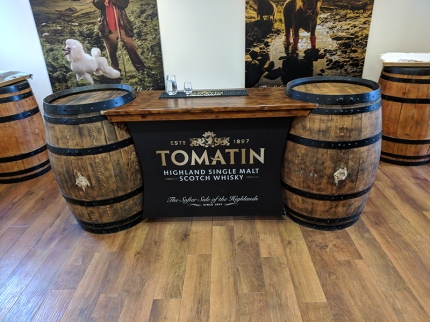 This is where the tour culminates. 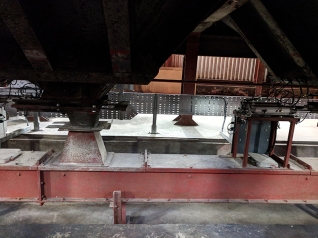 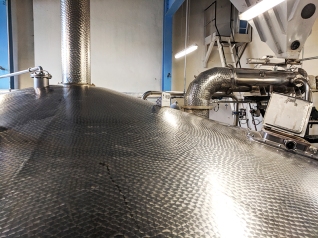 What a stunning photograph!

No, the grounds are not going to win any beauty contests. 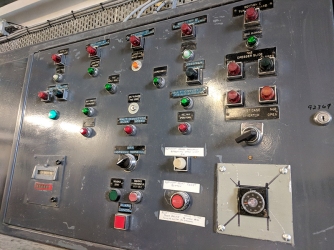 This is in the massive still house. 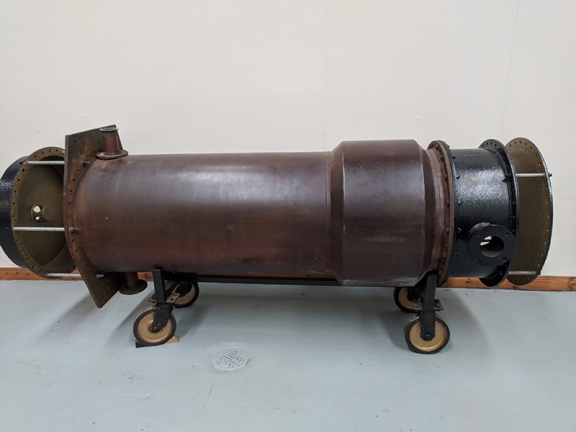 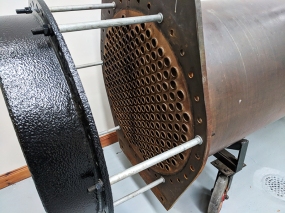 Is this part of a condenser? 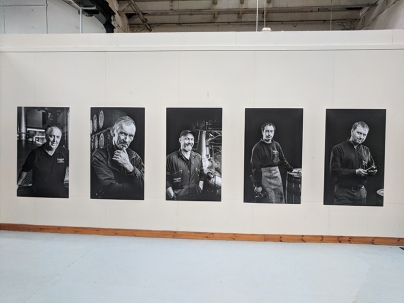 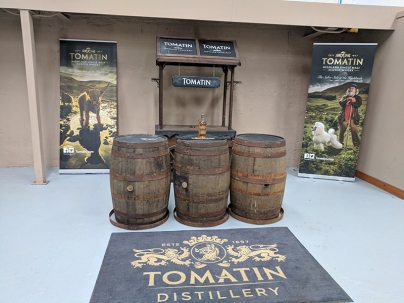 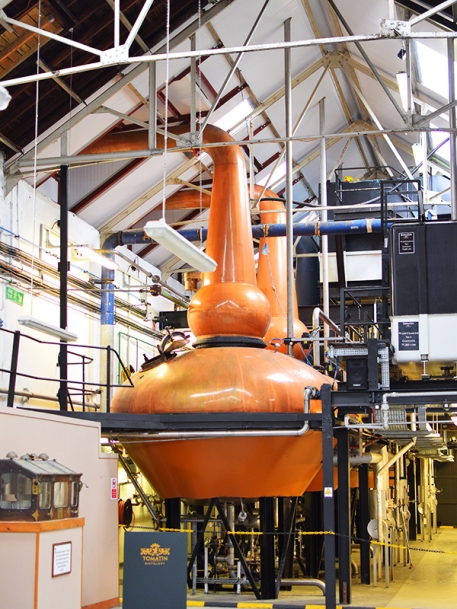 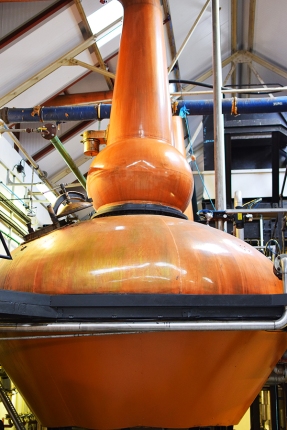 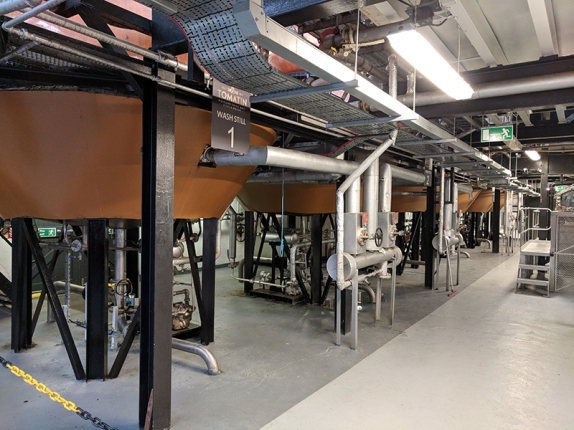 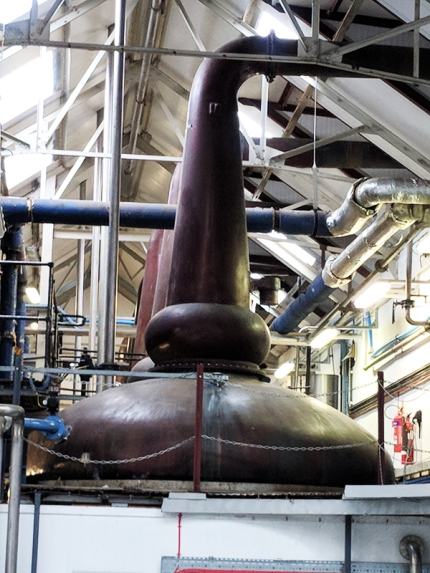 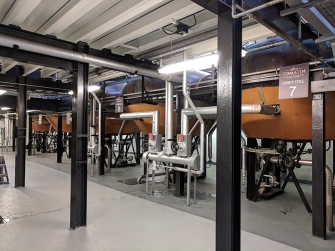 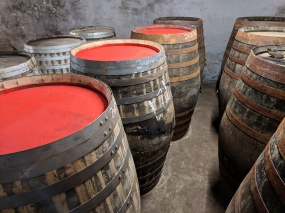 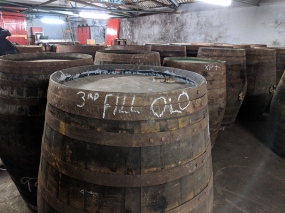 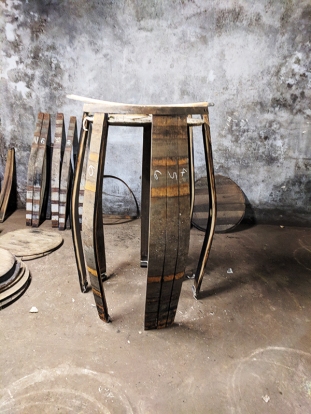 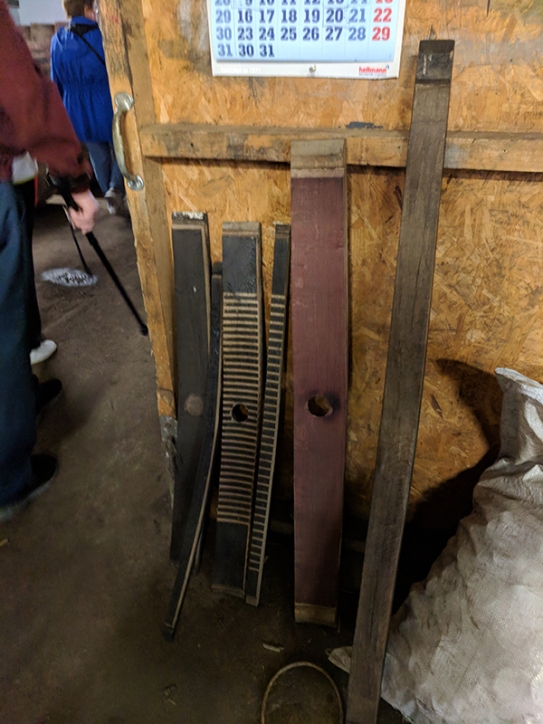 A view of the insides of different types of casks. 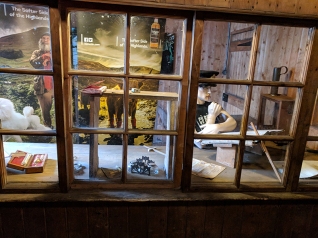 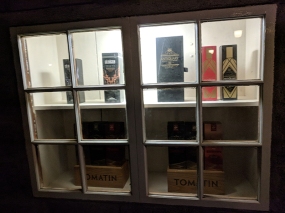 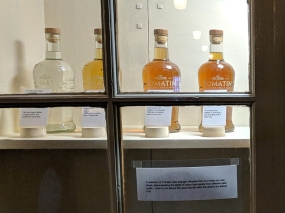 Bottles from their core range alongside a bottle of new make, showing the effect of cask type and age on colour. 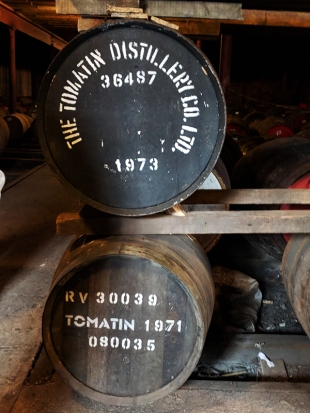 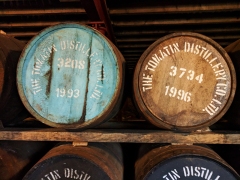 Back at the Visitor Centre.

All in all it was a very good hour and a very good tour. I’d place it right below Pulteney and right alongside Highland Park among the tours on this trip. At Highland Park we got to see floor malting in action—and their smaller still house is more charming—but we also get a bit of marketing cheese. Tomatin had no marketing cheese. They did, however, as previously noted, have five casks available for hand-filling. Given how much I’d liked the ex-bourbon cask from last year I was motivated to get another. I tasted the current cask and it did not disappoint. I also tasted the oloroso and PX casks and liked the latter enough to get one of those as well (it took the spot in my purchasing plans of the bottle I was hoping to fill at Aberlour). I also purchased a nosing glass as a souvenir (the tour does not come with one; or at least we weren’t given any).

Tomatin is not the most attractive distillery but it’s a very pleasant place to visit. And its location, right off the highway, just short of Inverness, makes it a convenient pick I think for a tour of a Highlands distillery. And as noted, you get to do a few things here that you don’t in many other places. I’d recommend a stop highly if you’re ever in this part of Scotland. It’s a good place for the whisky-obsessed and non-whisky-obsessed visitor alike.

Alright! That’s the last of my reports of formal distillery tours from this trip. The only other distillery report I have left is of the micro-distillery at the Dornoch Castle hotel. I’ll have that soon in tandem with a report on the famous whisky bar at the hotel. After that I’ll have some more reports on whisky stores in Edinburgh and a few reports on meals from this trip.