Back to Scotland, and back to a legendary whisky spot in the Speyside: The Highlander Inn in Craigellachie. We arrived here at the end of a long day. We’d left Edinburgh in the morning, in a convoy with our friends and their kids, and stopped for a few hours at Glamis Castle (lovely tour, lovely gardens). We then drove north to the Speyside via Aberdeen. We chose to go on the big highways because, well, when there’s the option of large lanes in Scotland, you take that option. The plan was to stop at Strathisla briefly on the way to the house we’d rented for the weekend in Mulben and then repair to the Highlander Inn for dinner. Alas, as I once said to Robert Burns, the best-laid plans o’ mice and men gang aft agley, and we found ourselves sitting in a horrendous traffic jam outside Aberdeen, caused by an even more horrendous accident that we eventually passed (an entirely incinerated car in the middle of the highway). There was no question of a distillery stop and so we high-tailed it directly to dinner. The sat-nav had us get off the A96 and onto the A920 right past Huntly and this brought us by some nice country roads up to Craigellachie. The roads were narrow, yes, but without the sheer cliffs and falls to the water by Loch Ness, on Skye and on the west coast to make things tense it was a very pleasant drive. And very nice to pass by signs for distilleries all along the way. There’s no doubt when you’re driving there that the Speyside is the heart of whisky making in Scotland.

And The Highlander Inn is one of the very best places in Scotland to drink whisky (read more about its history here) and it has a good reputation as a hotel as well. Given how many of us were there (two families, four children total) it was easier—and cheaper—for us to rent a house than to cram into an inn but I was looking forward to taking a look at their famous whisky collection and perhaps coming back after the kids had gone to bed to drink some of it. Well, the whisky collection does not disappoint. The word I am looking for is jaw-dropping: the walls are lined with excellent whiskies old and new, many legendary. And it is very much the proper whisky bar that I’d been disappointed not to find at Fiddler’s in Drumnadrochit (though I’m told it now has one). Alas, I did not in fact end up sitting and drinking at this proper whisky bar. Quite predictably, we were too exhausted finally at the end of the evening to drive back to Craigellachie, and the next two days were full and tiring as well. If the opportunity should ever arise for me to return to the Speyside—perhaps when the kids are a fair bit older—I’d like to stay at the inn and take a proper measure of the bar’s offerings.

In the meantime, I wandered around while we were there and took a bunch of pictures for the benefit of others who’ve not yet had the opportunity to visit. And we had a very nice dinner. Herewith the photographic evidence. Scroll down to see what’s coming next. 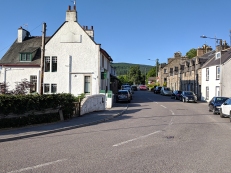 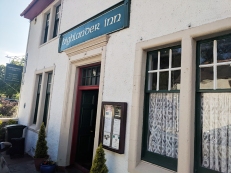 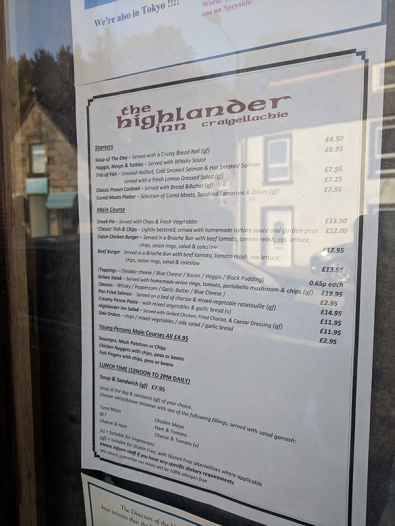 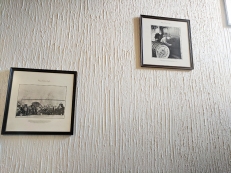 Lots of interesting photographs on the walls.

For the inn portion

Also for the inn part, I think. 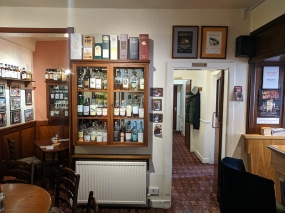 We were originally seated in this room but chose to go outside. 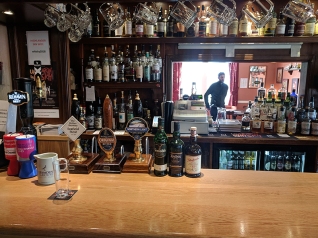 From the bar proper through the room behind. 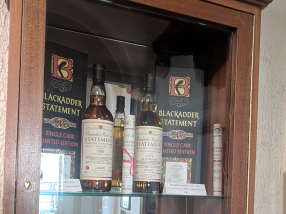 There’s a lot of whisky on display. 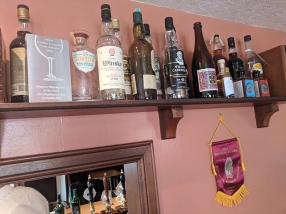 Some are even empties. 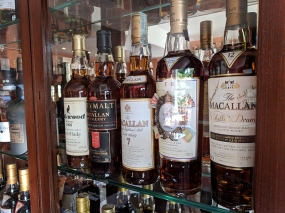 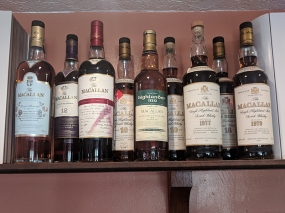 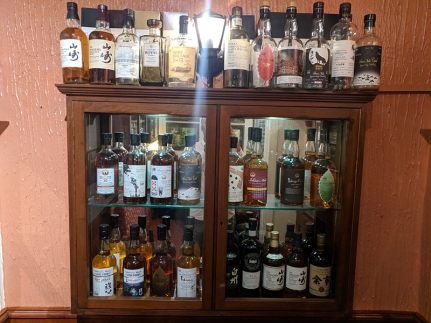 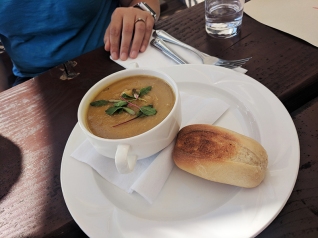 I want to say it was lentil.

On a bed of chorizo and ratatouille.

The food was much better than I was expecting—why I wasn’t expecting it to be as good as it was, I don’t know.

Next up from the Speyside: a stop at another very famous whisky bar and restaurant: the Mash Tun in Aberlour. After that my Scottish reports will veer further north, to Dornoch to yet another famous whisky bar (one that I did in fact drink at). Though some Hong Kong distractions may well cause some detours. Let’s see how it goes.