In the write-up of my quick dinner at Kau Kee I mentioned the genre of foodie recommendations for places like Hong Kong that is often seemingly predicated on running down any place that is too well-known or too often recommended to visitors. This is especially true of casual, down-market restaurants and stalls. Theoretically, there is nothing wrong with this per se: many places that show up on lists show up on lists because they show up on lists, and it can be useful to receive—if difficult to parse—counter-narratives. But when these counter-narratives are presented by people who are not residents of those places but themselves visitors, something else sometimes/often comes into play: the fantasy that one is not a tourist but a traveler—altogether more cosmopolitan, almost local.

[Disclaimer: what follows is desultory musing, composed on holiday in not much more time than it took to type up; some broad historical hypotheses here may not stand up to the scrutiny of actual academic research.]

This discourse is nothing new. I would guess it emerged right along with package tourism, which democratized international leisure travel—previously the domain of the wealthy and indolent, able to travel to and spend extended periods of time abroad. The traveler of taste and experience probably needed to distinguish himself (for the figure was always constructed as male) from the gauche tourist being herded from one sight to another. The tourist sees the prescribed sights, the traveler experiences the lives of those who live there; the tourist maintains a distance, the traveler gets close to reality; the tourist consumes, the traveler engages. As I am specifically referring here entirely to travel to Asia from Europe and the US, it’s also worth mentioning that tourism also emerges as a colonial discourse: it is the colony that becomes available, secured and labelled, for the gaze of the traveller from the imperial center. But hidden under this disdainful narrative is the fantasy of the colonial who can pass for local (see Kipling’s Kim O’Hara, Buchan’s Sandy Arbuthnot or real-life figures like Richard Burton). The figure of the shallow sightseer—traversing an already seen field, confirming that they are seeing what others have seen—is necessary to ground the other more sophisticated figure who goes off the beaten path, whether to see a temple nobody goes to or to eat dumplings at a stall only locals know about.

High imperialism ends—for the most part—in the 1950s and 1960s but the discourse lingers with its contradictions. And the tourist on the massive cruise ship or bus tour finds their opposite in figures such as Bruce Chatwin or, in a later period and different cultural context, Anthony Bourdain. By the end of the 20th century the discourse of tourism and travel is inflected with anxieties about authenticity that arise under postmodernity and late capitalism. I am reminded of Santiago Colas’ critique of the place of the Third World in Frederic Jameson’s Postmodernism or the Cultural Logic of Late Capitalism. Colas points out that in Jameson’s work, the Third World is paradoxically both the space whose takeover signals the final victory of capitalism and the space which figures as the final resistance to it. We can see how this works in the context of travel and food as well: at home we have only corporate chains, in Hong Kong or India (or wherever) they have street food as well; here we can only be consumers, there we can be alive. The (ex)Third World now becomes not just the site of the (neo)colonial picturesque but also the site of authenticity no longer available at home. American foodies will also recognize in this a pretty accurate description of the ethos of Leff-era Chowhound, for this is also the promise of “ethnic food” when at home.

Think of how tourism always offers the promise of seeing “the real” wherever. How much of the real you see, the discourse of food travel promises, depends on where and what you eat. And the traveler, who unlike the tourist eats off the beaten path, gets a bigger taste of the real with which to inoculate themselves against the flatness of their ordinary life. I don’t mean to suggest that there is something necessarily wrong with aiming to be a traveler rather than a tourist—I’m just musing about what’s at stake in the discourse of “going off the beaten path” or “eating like a local” and suggesting that it feeds a kind of hunger not unrelated to that of the tourist; both are narratives of consumption: the Third World being digested for the nourishing of the tourist/traveler from the First.

What does all this have to do with congee? Not much, directly. But I began to muse about this while on day 3 of a five day breakfast residency at the Lyndhurst Terrace location of Law Fu Kee in Hong Kong earlier this month. My hotel offered no breakfast but the internet told me that a steep two minute walk away was a well-regarded congee place. As there is no better breakfast than congee I repaired there on the morning of my third day and did not see the need to go anywhere else for the rest of my stay. (Why only the third day? On the first day I ate XLB for breakfast at the airport, and on the second day I was saving myself for dim sum.) By my third breakfast at Law Fu Kee the two women working in the small, very down-home establishment recognized me and we had the kind of rapport that people who have no language in common but see each other in the same context for a few days in a row can over-invest with meaning. In my case I began to fancy myself as eating like a local and felt quite smug about it. Then I realized that I had no idea if anybody else eating there was in fact a local, and by the fifth morning I’d confirmed that I was the only customer who had been there every morning. Not that I imagined they’d wonder where I was, while paying on the last morning I managed to convey that I was leaving that evening. They mimed a plane coming back while probably thinking, “fuck off with your fucking cameras!”

Anyway, eating at Law Fu Kee five mornings in a row (or 10 or 30 if I’d stayed longer) didn’t make me a local, but it did mean I ate very good congee. The restaurant—and they have a couple of branches—offers more than congee but in the early morning slot, it is pretty much the only thing available. You enter right past the kitchen where the congee is made, apparently starting many hours before they open at 7 am, sit down at the functional table you’re pointed to and choose one of their many congee toppings (you can also get a large bowl of plain congee). The only other question is whether to get deep-fried breadsticks to go with your bowl or not (unless you have an early lunch, the correct answer is “yes”). I got a different topping each day: fish slices on day 1, fish balls on day 2, pork kidney and liver on day 3, pork giblets with fish slices on day 4, and lean meat (pork) and century egg on day 5. Each iteration was excellent, the bowls on days 1 and 5 were outstanding achievements in the field of congee excellence.

The texture of the congee differed a bit from morning to morning, seemingly depending on how early I was there. Some bowls came garnished with strips of ginger and chopped green onion, others with only green onion. Sometimes I added more or less white pepper, sometimes more or less red vinegar. The breadsticks can be eaten alongside, they can be dipped in the congee, they can be dumped in whole or ripped apart. My favourite way to eat them was after dipping them in the killer hot bean sauce that was also on the table—this was also a good sauce to dip the meaty bits in. Each bowl of congee runs between HKD $37 and $44. Breadsticks for one add another $6. It’s very good value for a very nourishing start to the day—I walked 4-7 miles every day so I needed it.

There’s no English signage so look for the place right next to Cheung Hing Kee. 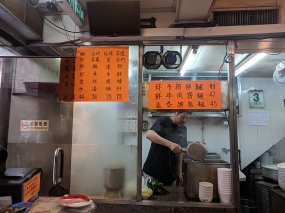 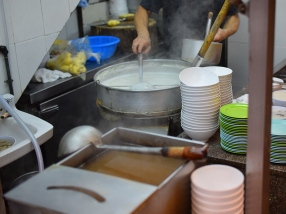 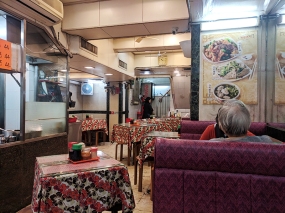 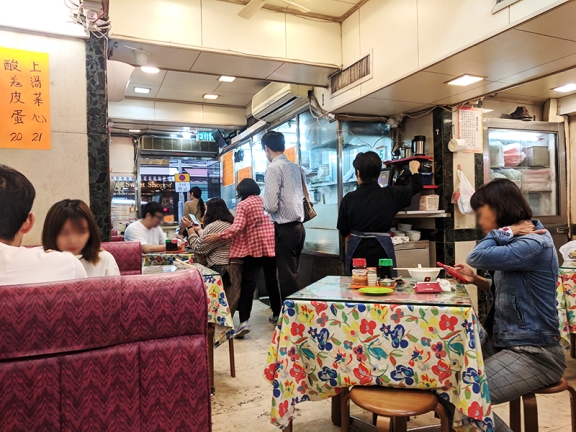 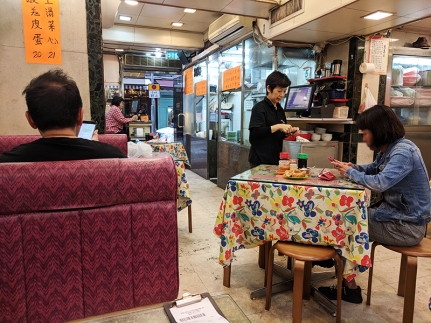 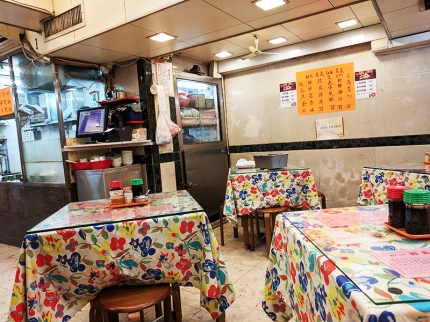 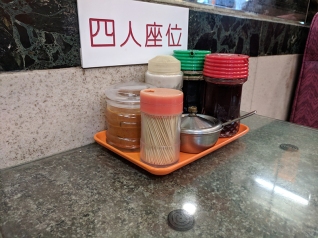 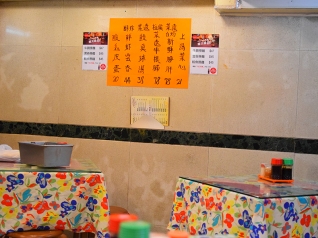 Thankfully, they also have bilingual menus. 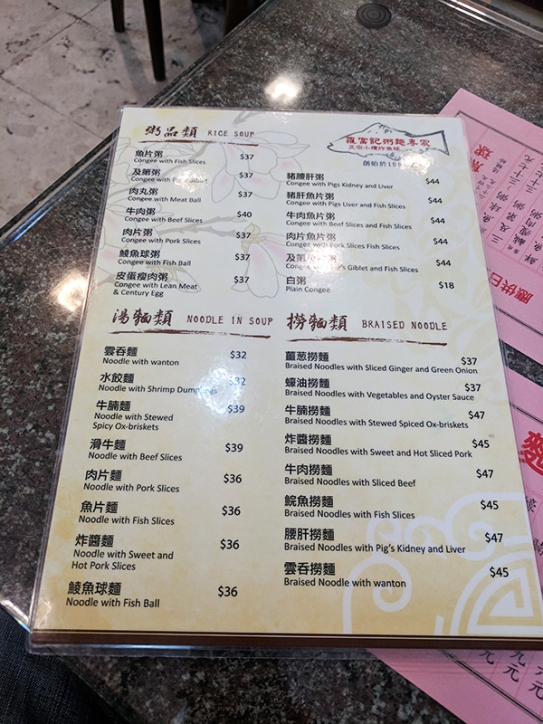 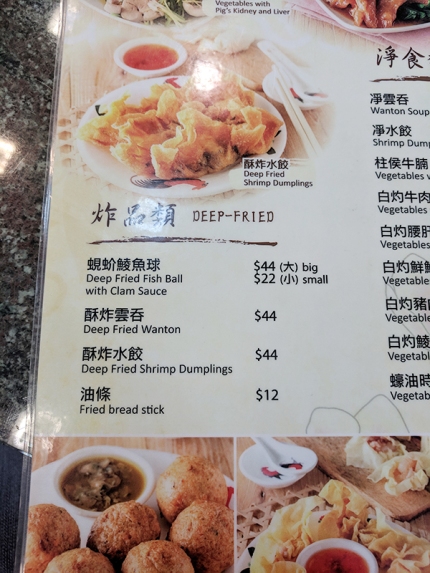 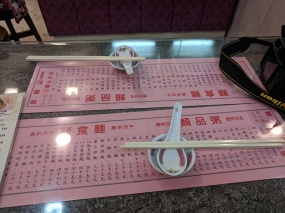 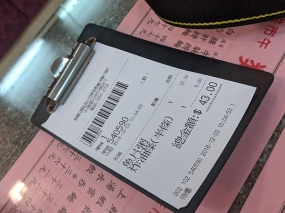 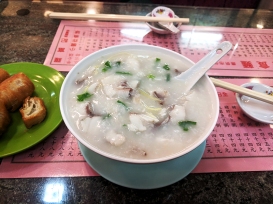 The fish was cooked perfectly and was so good with the texture of the congee. 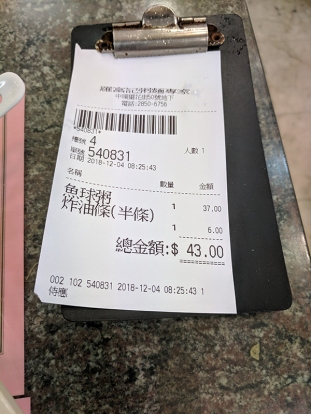 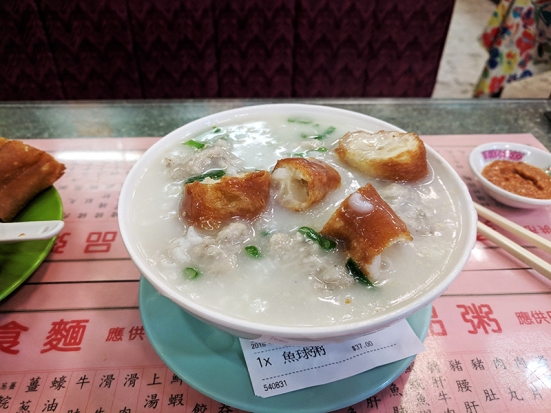 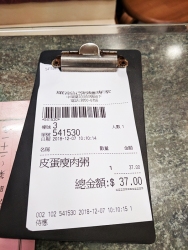 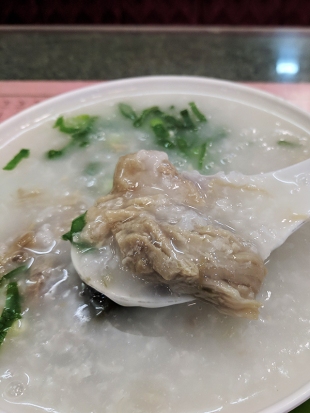 Right next to this location of Law Fu Kee is a place that specializes in Shanghai pan-fried juicy buns/dumplings and right opposite it is the mothership of the famous Tai Cheong Bakery. It is possible that on the first day I ate at Law Fu Kee I followed up with four dumplings at Cheung Hing Kee and a warm egg tart at Tai Cheong. I then felt like I was going to die and did not do it again. I can tell you that if you arrive at Tai Cheong Bakery right after 9 am you are going to get an egg tart that has not been out of the oven very long.

Next up from Hong Kong: a very good Vietnamese meal at a place very close to Law Fu Kee but a world or two apart in ethos and audience.