For my first dinner in Hong Kong I had lined up at Kau Kee for brisket/tendon curry noodle soup. My next three dinners were far away from traditional Cantonese: Thai on the second night (review coming soon), mod-Vietnamese on the third night, and fusion’ish on the fourth night (review coming soon). On the fifth night, however, my friends and I went out for a very hardcore Cantonese meal of claypot rice at a place so known for claypot rice that it has it in its name: Kwan Kee Claypot Rice (at least I assume that’s the restaurant’s full name—it shows up that way on English language sites; of course, I do not read Chinese).

If you look up the restaurant you’ll see there are a couple of branches. We were at the original in Sai Ying Pun. And if you look it up you will also see that it is a very busy restaurant and hard to get a table at if you just show up at peak dinner hours. This is a bit of a non-issue if you plan ahead minimally. I called the day before and with only a bit of a linguistic struggle was able to make a reservation. And when we showed up a bit early they sat us down right away. Reservations are less necessary at lunch, apparently, but this was irrelevant for my purposes as I wanted to eat their claypot rice and that’s only served at dinner.

Unlike the strictly no-reservation noodle soup shops I ate at on other occasions, table turnover at Kwan Kee is not rapid. This is because their claypot rice is cooked to order—it can take upwards of 30 minutes from the time you order it. As it happens, while their claypot rice is clearly popular, the true signature item seems to be their “Pork Bone Soup in Pot”. This pot is a rather massive affair, served atop a burner, and most tables seemed to have one on them. However, since I was insistent on trying a couple of versions of their claypot rice it seemed like a huge vat of soup might be overkill and we passed. Probably a mistake.

What was not a mistake, however, was the order of “Stewed Eggplant with Hot and Spicy Sauce”. Cooked in a claypot as well, this was one of the best dishes I ate in Hong Kong. The “Fried Chicken with Scallion in Soya Sauce” from the same section of the menu was excellent as well. Also good but hard to make a dent in because of how much food we had on the table for three people, was the steamed “Bombay Duck Fish with Garlic and Vermicelli. My friends took most of that home. The namesake claypot rice comes in a large number of variations. We got the version with white eel and spareribs and the version with beef and egg. Both were good but really a group of three doesn’t need more than one order of claypot rice unless that’s all they’re eating.

For pictures of the restaurant and the food, launch the slideshow below. Scroll down to see what’s coming next.

Quite a wait when we arrived, which made us feel extra smug with our reservation. 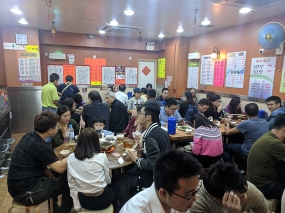 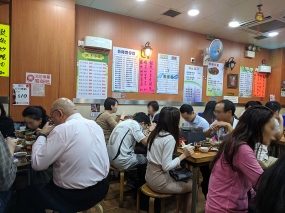 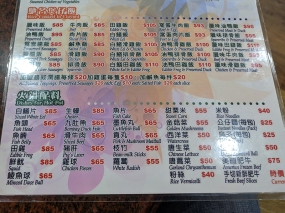 It’s common at restaurants like this in Hong Kong for people to just dump/spit bones onto the table as they eat.

Oh, this was good. 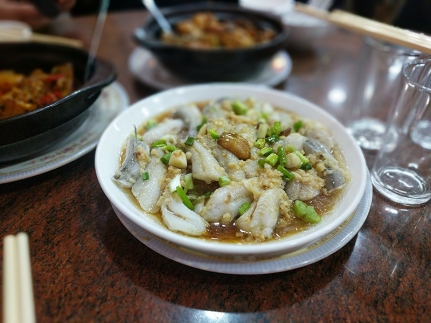 And I wish I’d been able to eat more of this but we needed to save room for the claypot rice.

Already more than enough food for three but… 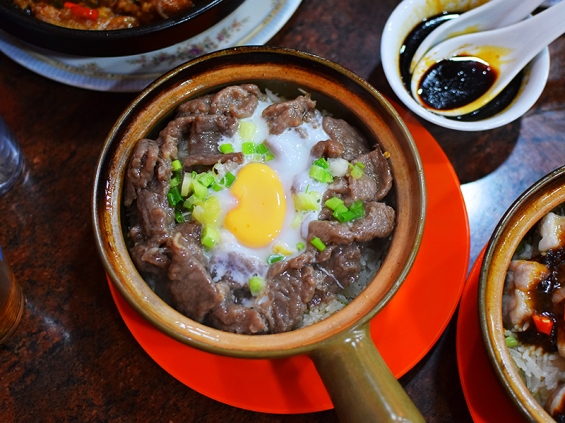 The scorched rice from the bottom is the best bit.

All of this plus a bit of beer must have come to about $500 (HKD) or <$25 US/head for three people (with enough food for five). If you’re not eating at the high end in Hong Kong, you can eat very, very well for not very much money.

Well, though my Hong Kong trip is very much in the rear-view mirror—when this posts I’ll be on a plane to Los Angeles—I still have a number of meal reports to come from the city. Before any of those, however, I might post pictures of the seafood stalls at Sai Ying Pun’s wet market (which I’d visited on the morning of the day of this dinner). And after that I might start mixing up the remaining Hong Kong meal reports with Bombay meal reports.