The food of the southwestern coast of India is something I had almost no sense of when I was growing up in India. I grew up all over India but, other than brief visits to Goa, never went further south than Hyderabad; and as an adult I didn’t spend much time in Bombay till after I’d left India for the US. It wasn’t until I ate at Swagath in Delhi in the early 2000s that I realized just how different the cuisine of coastal Karnataka, particularly Mangalore, and of the adjoining Konkan coast is from the South Indian cuisines I was more familiar with. And I just loved it. But as good as Swagath was in its heyday, its food cannot compare to what is available in Bombay—which makes sense as the cuisine is both seafood-heavy and because Bombay, due to proximity, is chock-full of people from those parts of the country. As a result, whenever I am in Bombay I try to eat at at least one restaurant that specializes in Mangalorean/Konkani/Malvani cuisines. On this trip Jai Hind Lunch Home was my first such stop.

I should say first of all that as a North Indian and only an occasional visitor to Bombay, I am not entirely sure of the distinctions between Mangalorean, Konkani, Goan and Malvani cuisines. My sense is that there are strong family resemblances and that it’s probably accurate to think of them as being on a continuum rather than as being clearly distinct from each other. People from those regions, and also people who know more, may disagree. If you are one of them, please educate me below. I can tell you that Jai Hind’s versions of dishes from these regions is as good as I’ve had elsewhere in Bombay.

The restaurant has a number of locations. I was dining with an old friend and the Bandra (West) location was convenient for us both. It’s a small restaurant split over two levels, and if you’re there for dinner on the weekend there’s a good chance you’ll have to wait outside. Our wait was about 15 minutes and during that time we actually ordered all our food—a process that included the inspection of the live crab we would be served (various fish are also on display in a refrigerated case outside). One word of warning: the restaurant does not have a restroom. I don’t know what female patrons would do in an emergency, or what the restroom story is at their other locations, but a man who was so foolish as to start his evening drinking beer in a bar and not use the restroom there before heading to Jai Hind’s Bandra (W) location could talk his way into being allowed to use the employee washroom—but let’s just say this washroom, shared between a number of neighbouring businesses, is not the most attractive option. It is possible I was this foolish man.

But let us leave this unattractive topic and focus instead on the food. No matter what you eat, your meal at Jai Hind, or any of its competitors in the genre, must begin with a glass of their solkadi, a wonderful drink of seasoned coconut milk, soured and stained pink by the dried petals of the kokum flower. After that you can get to work on whichever fish dishes you’ve ordered. We began with an order of the bharli bombil. Bombil is the famous Bombay Duck, a signature fish of the region, and as “bharli” means stuffed, I was expecting stuffed fish. Instead what showed up was closer to what we Bengalis call “chops“, large croquettes with fish and prawn stuffing. It was very good. Also very good was the prawn Malabari fry.

After these opening pleasantries it was time for the serious fishy action. When ordering your fish you have to first decide what kind of fish you want and then how you want it cooked. While ordering outside we’d settled on pomfret but couldn’t make up our minds about whether we wanted it prepared as gassi (a sour-hot curry with coconut) or as pulimunchi (a thicker sauce with tamarind and chillies). The gent taking our order solved our problem in a Solomonic manner, saying he would give us half the fish as gassi and half as pulimunchi. All that remained was to specify that we wanted the crab prepared a la butter-pepper-garlic and that we wanted lots of neer dosas to mop everything up. And it was all bloody excellent (though as you will see, none of it was particularly photogenic). By the way, as you will also see below, the menu—as at many restaurants in Bombay and Delhi—actually begins with a North Indian/tandoori section. But you’d have to be insane to pick that stuff over the coastal seafood.

For pictures of the restaurant and the food please launch the slideshow below. Scroll down for price, thoughts on service and to see what’s coming next. 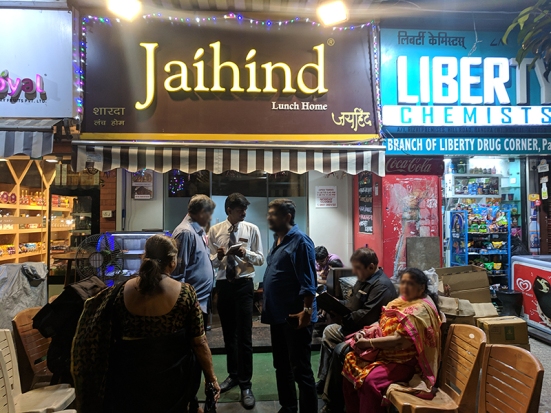 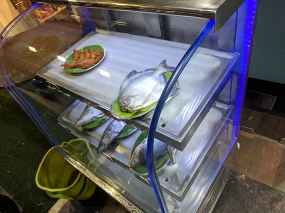 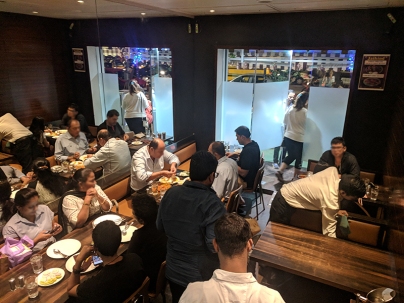 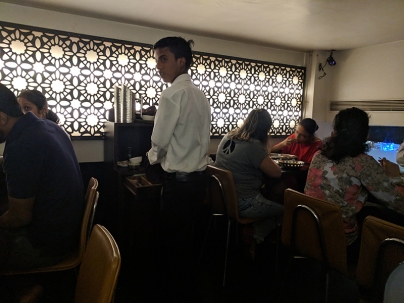 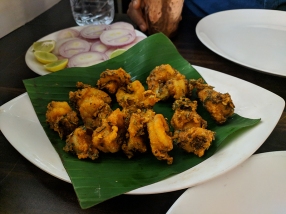 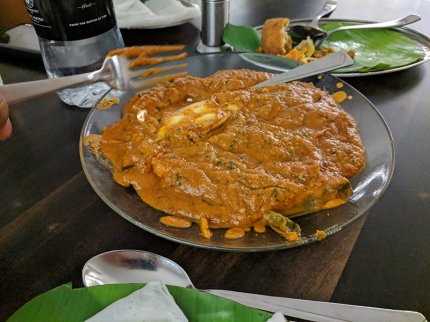 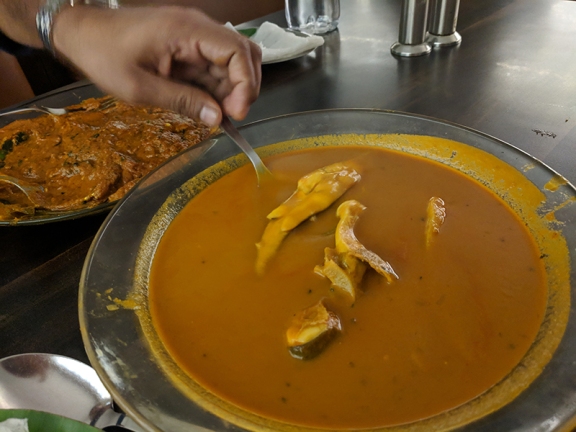 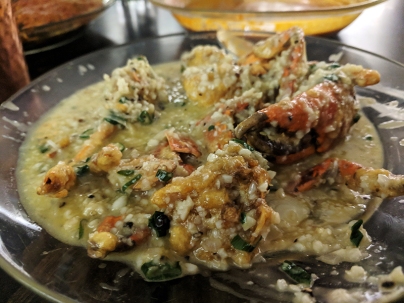 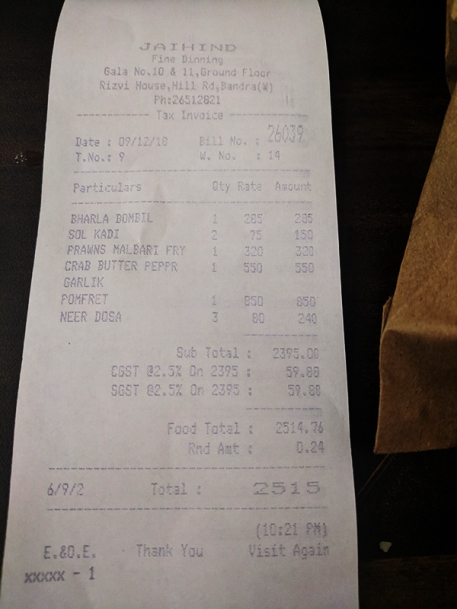 The food was all excellent—with the pulimunchi and the crab butter-pepper-garlic particular standouts for me. With all this seafood, the bill came to Rs. 2500 for two people, or just about $35. Service was prompt and friendly, though there was some confusion with our crab which the kitchen had apparently not been told to prepare—truth be told, it allowed us some time to let things settle Tetris-style in our stomachs. I would happily eat here again and again—though I’ll be sure to hit a bathroom before getting there next time. In practice, however, it’s likely that on my next trip I’ll first check out another of their competitors, probably Gajalee—but that’s a couple of years away.

Okay, I think I’m going to go back to Hong Kong for a couple more restaurant reports before coming back to Bombay. And I haven’t even started on the Delhi reports (or Los Angeles after that). Not sure when my first Minnesota report of the year will go up—I do have my annual round-up of meals at Grand Szechuan to do. Soon!