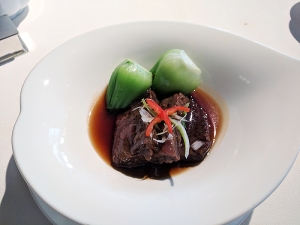 Other than Crystal Jade at the airport, Lung King Heen was the only restaurant I ate at on this trip to Hong Kong that I’d eaten at before. That was during our short family sojourn in the city in early 2016. We’d gone there with every intention of eating their Executive Set Lunch but on arrival got seduced by their a la carte menu. That was a very expensive lunch but also a very delicious one. I did nonetheless harbour a bit of a sense of unfinished business re their Executive Lunch; and so when I had a meeting on this trip at the IFC, I couldn’t resist walking over to the Four Seasons and inquiring about the possibility of a lunch seating later in the week. Once again, I managed to get a table with only a few days notice; once again it was in a corner of their dining room, far away from their fabled view of Victoria Harbour. But I was not complaining.

I did feel a twinge, however, when I sat down and looked at the menu and discovered that the price of the Executive Set Lunch had gone up by $100 HKD to $640 since our last visit. But this was going to be a splurge lunch anyway—compared to my excellent congee breakfasts that barely cleared $50 HKD apiece, or $50-60 meals at places like Samdor and Mak’s Noodle. My only other complaint is that while I only had a glimpse of the famous view, I received a full 100% of service that was most over-the-top in its obsequiousness—the servers may not have scraped but they bowed a lot, and even went so far as to compliment me on the quality of my entry-level dslr (I almost burst out laughing).

Speaking of my entry-level dslr, it was once again defeated by the yellow light that bathes tables from all directions at Lung King Heen’s tables for the hoi polloi. Setting the custom white balance made for cold blue tones and using the automatic white balance made for deep amber tones. Strangely, my phone’s camera did better with the light. As a result I can only offer rather mediocre pictures of what was once again a very good meal.

For inadequate photos please launch the slideshow below. Scroll down for thoughts on service, overall value etc.

I was not seated at these windows… 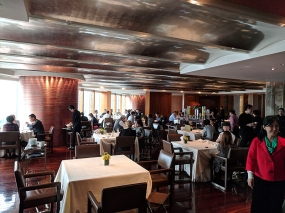 …or in this dining room at all. 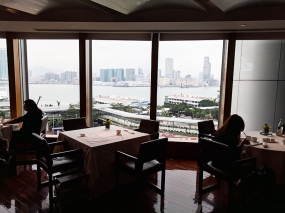 Instead I was in the smaller dining room near the entrance. There are tables with harbour views here too but I was tucked away in a rear corner.

I shudder to think how much my lunch would have cost with Champagne. 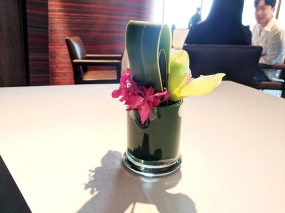 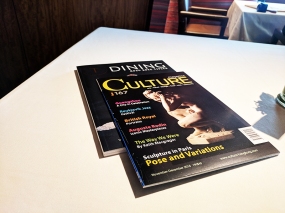 The solo diner is given magazines to entertain them. 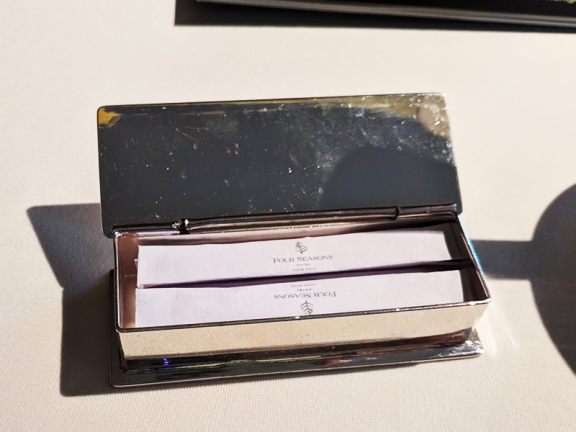 Disappointing really that the toothpicks themselves have generic hotel branding and that there’s no separate box furnished for disposal of used toothpicks. They should be docked a star. 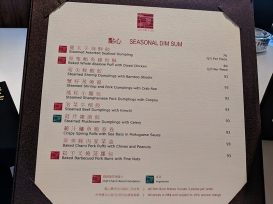 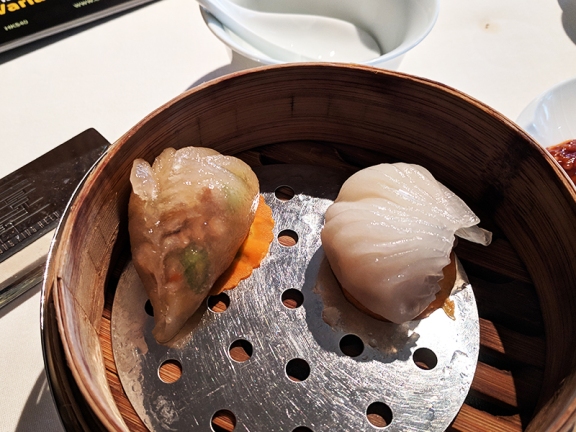 Not the most attractive presentation but very good. 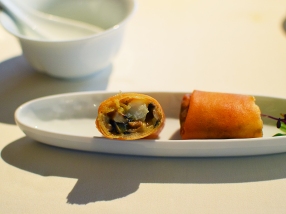 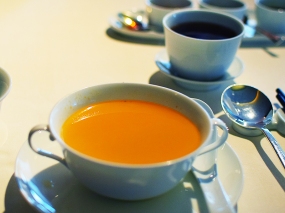 A terrible picture of a not very attractive but very tasty soup. 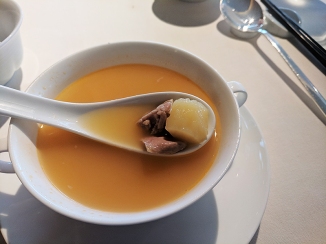 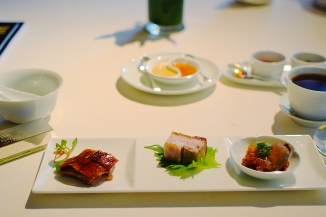 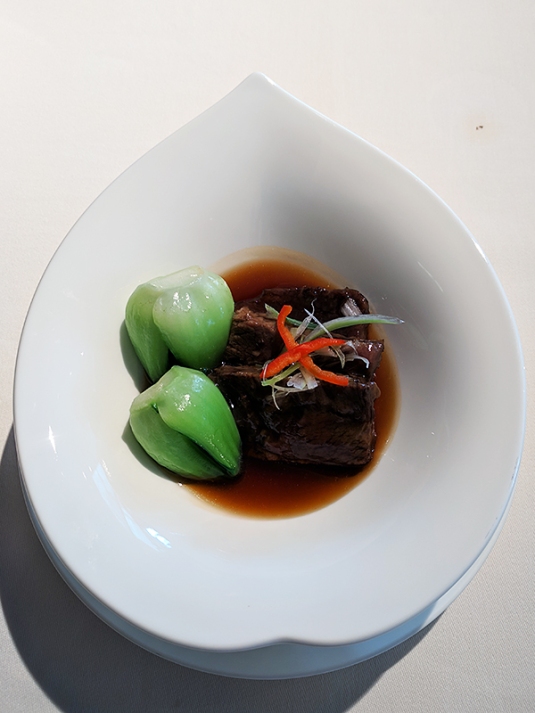 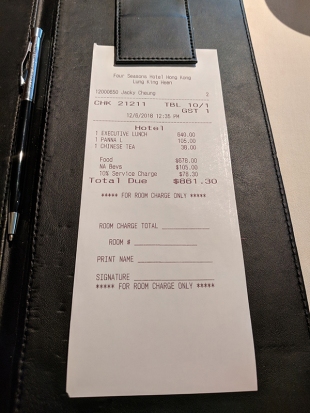 The service, as I noted, was generally obsequious—and far more so than on our previous visit. It was also very present for most of the meal before all but disappearing as I waited for the bill. And speaking of the bill, I was rather shocked to see that I was charged $105 HKD ($14 US) for a bottle of water; this made the $38 I was charged for the very good pu-erh tea seem like a bargain. Along with the service charge this pushed the bill up all the way to $861 HKD or about $110 USD. Was it worth that price? I think that on the whole I would say no. I preferred our more expensive lunch from 2016. Nothing at this meal was less than very good but at the price I would rather pay a little more to eat a la carte. Of course, that’s only really possible if you’re not dining solo. No one expects value at a Michelin 3 star restaurant but with the Executive Set Lunch it feels like you’re only getting a glimpse of what they’re capable of, while still paying a lot. I guess they have to pay somehow for the ludicrous cases in which they present their toothpicks.

Okay, my remaining Hong Kong reviews are of far less exalted and expensive places, and I should be done with all of them by the end of next week. And then I’ll finish up my Bombay reports from later in this trip and London reports from earlier last summer; and then I’ll get started on my Delhi and Los Angeles reports from the end of this December’s exhausting travel. Whew!