The nice thing about reviewing restaurants on your own blog is that you can re-review places as you desire. Unlike the professionals, who never seem to go back to places already reviewed, we amateurs can return to check in on places, and we can do our (very) small part to continue to promote very deserving restaurants that remain under the radar or which, past initial, passing recognition, don’t get any push on social media from the usual boosters of the local scene. One such is House of Curry, the small but excellent Sri Lankan restaurant in Rosemount. I first reviewed them in 2014 and again last year.  And I am happy to report that in 2019 they are still around and still putting out excellent food. Though I am Indian (and Bengali) and they are Sri Lankan, their cooking is as close as I can get to the flavour of Indian home cooking in the Twin Cities and I enjoy their food more than that of any Indian restaurant in the metro—including Persis in Eagan, who I’d recently anointed the best Indian restaurant I’d eaten at in the area.

If you haven’t been before, and don’t have much of a sense of Sri Lankan food, you should know that, despite the word “curry” in their name, this is not the place to go with an expectation of chicken tikka masala and dal makhni. But you can get cookie cutter versions of those dishes in any number of places around the metro—nowhere else will you get the dishes House of Currys specializes in, be it their excellent kottu or their fiery curries or their watalappan (a jaggery and coconut milk pudding in the flan family, and one of my favourite desserts in the Twin Cities). I don’t mean to suggest that Sri Lankan food has nothing in common with Indian food. Indeed, everything House of Curry serves is in a broad continuum with the cuisines of the southern Indian states of Tamil Nadu and Kerala—the Sri Lankan kottu roti is very similar to the Indian Tamil kottu porotta and hoppers are basically appams and so on. It’s merely that this food has little in common with the North Indian restaurant food that dominates menus in the Twin Cities (and everywhere else in the US). So House of Curry is the place to go not merely to eat excellent Sri Lankan food but also to get a good approximation of many South Indian foods beyond idli-dosa.

So it was at two recent lunches eaten a week apart. On the first visit the restaurant was all but empty. My friend and I were the only persons there until the very end of the meal and it didn’t seem like there’d been anyone there before us. At the second visit I was with the missus and we were glad to see three other parties there and evidence that others had probably just left. I note this because we’ve never seen them anywhere close to full. Of course, we’ve only ever gone for weekday lunch and it’s probably the case that dinner and the weekend is when they’re busiest. But as they don’t put out a buffet I can tell you that even on a slow weekday afternoon you will get excellent food, prepared with care.

So what did I eat at these two meals. At the first visit my friend and I got the chicken rolls (think croquettes) to start, followed by their chicken kottu, the fish curry with coconut milk, bonchi curry (a very good dry preparation of green beans) and an order of the watalappan. All were very good, the kottu and beans and watalappan were excellent. On my second visit the missus and I started with their spicy chicken wings (few better in the metro) and went on to the lamb kottu (even better than the chicken version), the shrimp curry without coconut milk, the ala theldala (a stir-fry of potatoes with spices) and another round of the watalappan. This meal may have been ever better than the first.

For pictures of all these dishes please launch the slideshow below. Scroll down for thoughts on value and to see what’s coming next. 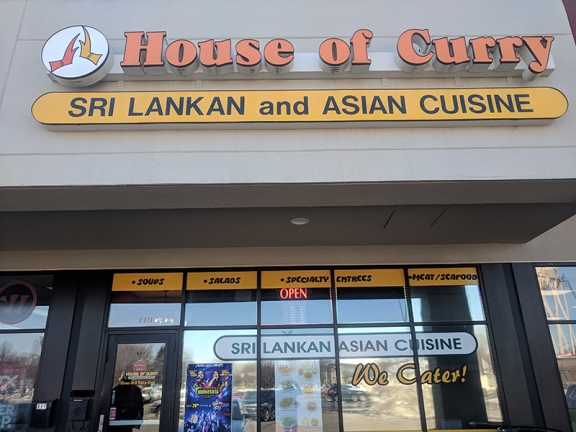 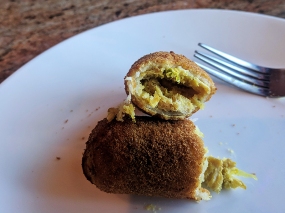 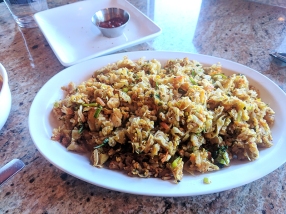 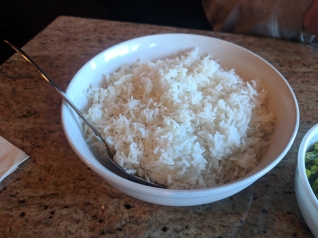 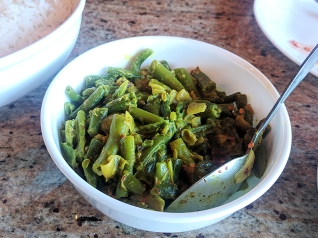 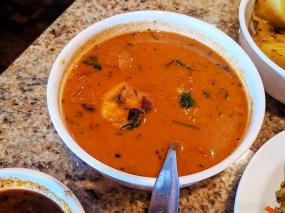 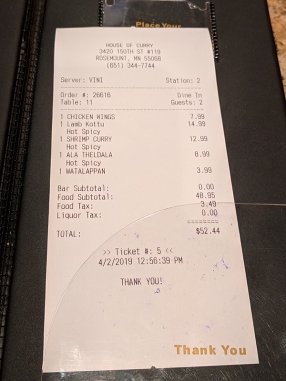 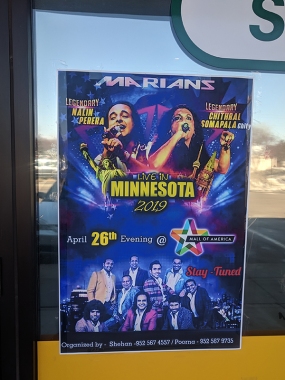 These meals came to just below and above $50 before tip respectively and each generated leftovers even after some serious overeating. Basically, each meal had enough food for three people; so after tip you’re really looking at $20/head. But you don’t have to go with other people to be able to taste a bunch of things or get good value; they have a thali equivalent that will let you try a number of dishes.

I do hope to inspire those of you within range to either go for the first time or to remember to go back. It’s not like we have a wealth of Sri Lankan food (or good Indian food) in the area and we should try to do our best to support what we do have (and not resort to over-praising mediocre restaurants that serve more familiar fare). It helps that it’s a small restaurant run by very nice people who deserve all the support we can give them. So if you haven’t been or haven’t been in a while: go. There’s no better meal combination with the adjacent movie theater. And, oh yes, if you like to eat very spicy food, at the hottest setting the food at House of Curry is about as hot as it gets in the Twin Cities.

Coming up next from the Twin Cities—weekend weather permitting—will be a report from a South Minneapolis restaurant with a very different profile. But before that I’ll probably have another review each from Delhi and Los Angeles. And, of course, more booze reviews.