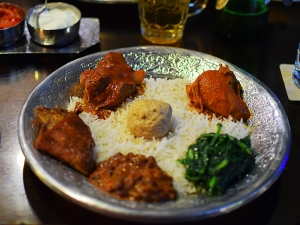 Walking into Chor Bizarre is like walking into the past for me. I don’t know when it opened in the Hotel Broadway on Asaf Ali Road in Daryaganj but it looks exactly the same as it did when I first visited in the early 1990s (memory is unreliable, of course—especially at my increasingly advanced age). This was before the liberalization of the Indian economy and the upper/middle class restaurant boom that followed (along with so much else). At the time the kitschy decor of Chor Bizarre was quite unusual, if not entirely original. Well, the particular kitsch of Chor Bizarre (unchanged to the present day) was and is original—they bring together in their decor items from chor bazaars (or thieves’/flea markets) that can be found all over India; but the general genre of kitsch they occupy was not—the Dhaba at the swanky Claridges hotel, for example, evoked informal highway roadside trucker restaurants for moneyed Delhi-ites and tourists alike, right down to having a truck parked inside the restaurant. Nowadays, of course, high concept restaurants can be found all over Delhi but the other thing Chor Bizarre is known for is still a rare find: Kashmiri food.

As you may have heard, Kashmir is a complicated subject in India—indeed, including Kashmiri food in the larger category of Indian food is a political statement, whether intended as such or not. And in the last few years, under the BJP government, it has gotten even more complicated. It’s not the case that there is no Kashmiri presence in Delhi but despite the far greater proximity of Kashmir to Delhi than Kerala it is much easier to find Malayali food in Delhi than it is to find Kashmiri food. Not that Chor Bizarre hasn’t tried over the years to change this situation. They’ve opened a number of satellites/franchises in the past—I remember eating at their Noida location in 2003 or 2005—but they’re now back to just the original location on Asaf Ali Road. There was even a London location at one point, but that’s closed too.

I don’t mean to give you the impression though that Chor Bizarre is exclusively a Kashmiri restaurant. Kashmiri food occupies just one part of their menu. The rest takes in fairly familiar North Indian fare of the tandoori/creamy curry persuasion. I’ve had some of those dishes on prior visits and they’re fine but there’s really no reason to go there to eat that stuff. You can find those dishes all over Delhi but, as I say, Kashmiri food is a rarer commodity.

Whenever I visit the Kashmiri dishes are all I eat. On this occasion I was dining with an old friend who is a bit of a big wheel in the publishing world (Daryaganj is home to a lot of publishing houses and a lot of their staff are habitués of Chor Bizarre and Thugs, the also kitschy bar in the Hotel Broadway) and we both got the tarami, which is basically a Kashmiri thali. Otherwise with just two people it’s hard to put much of a meal together. They do have a lunch buffet as well (or at least they used to—I didn’t look this time). The tarami includes a number of iconic Kashmiri dishes: rogan josh, goshtaba (a spongy meatball in a tangy yogurt gravy), Kashmiri kukkad (a red chicken curry), tabak maaz (deep-fried lamb ribs), rajma (kidney beans) and haaq (steamed Kashmiri greens). I don’t have enough exposure to Kashmiri food to be able to tell you where their food falls in terms of traditional flavours, preparations or quality but I can tell you it’s quite a bit better than what’s on offer at Khyen Chyen.

For a look at the restaurant and the food launch the slideshow above. Scroll down for notes on service and value and to see what’s coming next. 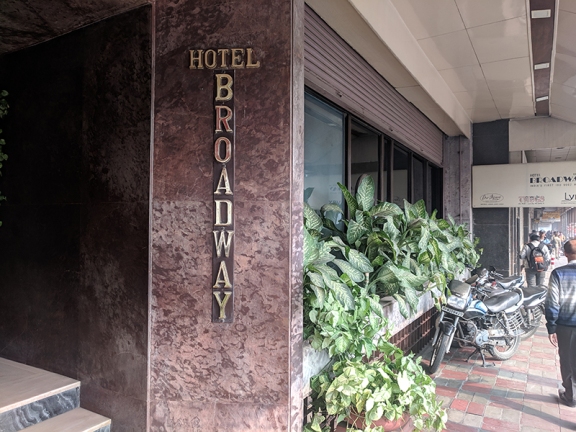 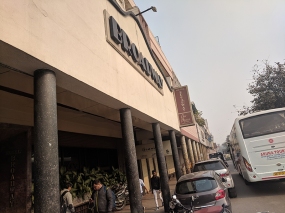 A little more chaotic a few feet away.

The entrance to the restaurant is from inside the hotel. 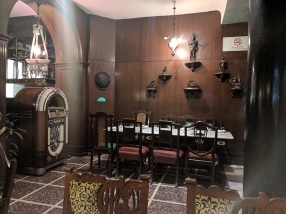 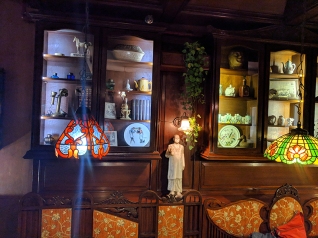 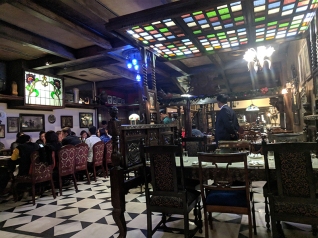 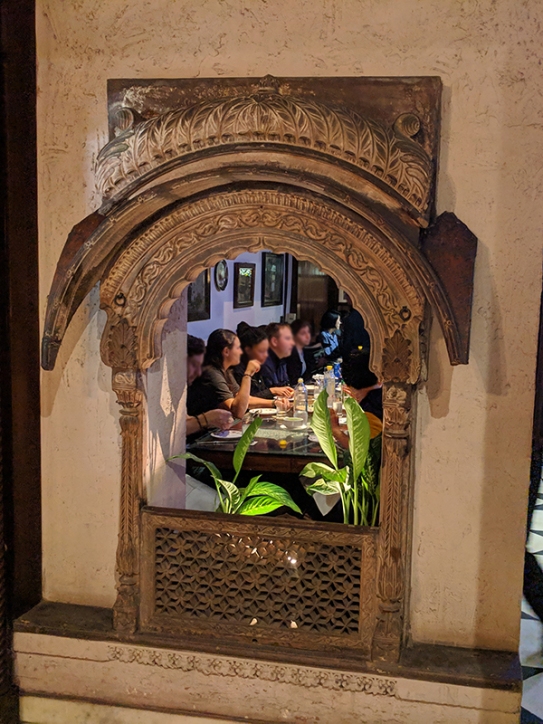 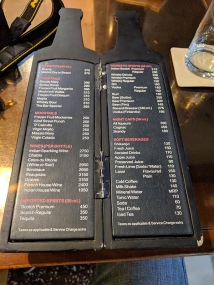 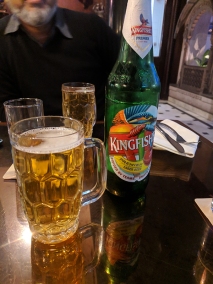 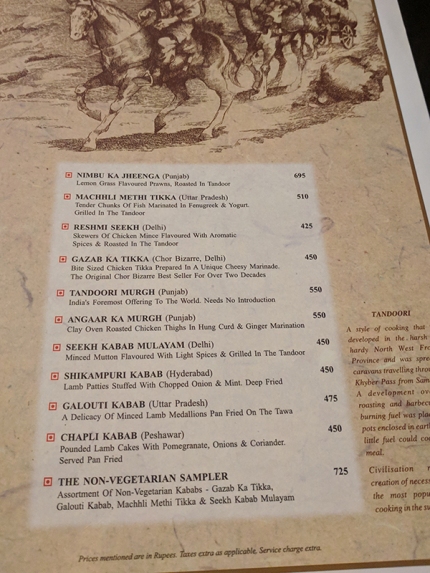 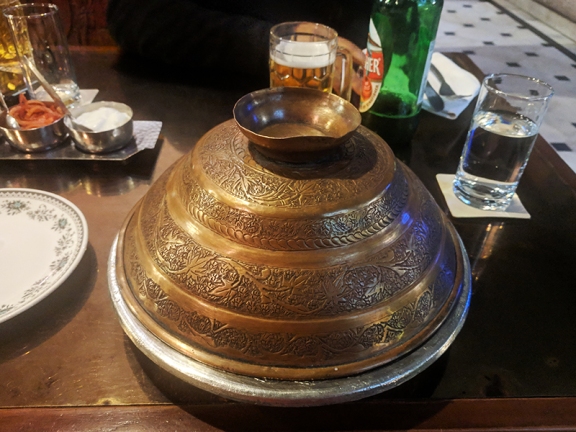 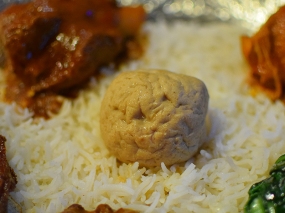 Made with Kashmiri chillies (not spicy), ginger and fennel powders and kasoori methi (dried fenugreek leaves). 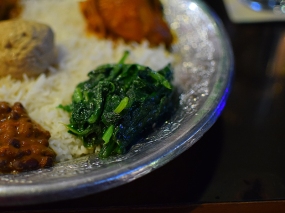 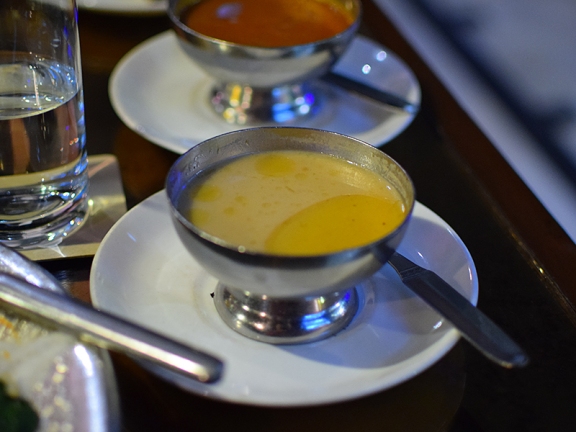 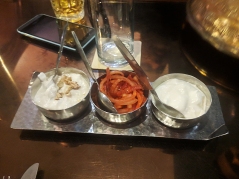 On the left is a very good walnut and radish “chutney” with thick yogurt. 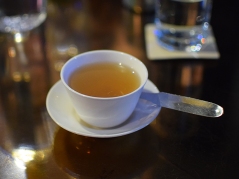 All of the above—two taramis and beer—plus tip came to about Rs. 2000 or just about $30. Which is not a cheap meal in Delhi but is still pretty good value.

Service here is always very good. On this visit it was particularly warm. As I noted, my friend is a publisher and not a stranger at Chor Bizarre and so we had the attention of the manager who pressed kehwa (the famous Kashmiri tea) and phirni on us at the end (he was appalled that we were not ordering dessert). But the service has been very good in the past even when I’ve visited on my own or with more lout’ish friends. The restaurant is quite popular, by the way, with tourists and locals alike. I’ve only ever been for lunch, however; I’ve no idea what it’s like at night.

Coming up next on the food front: I’m going to close out my Delhi reports with a quick account of two chaat-based outings. I know some of you have been waiting for my long promised/threatened review of Priya Krishna’s cookbook Indian(-ish) but with just three weeks to go in the term my actual job is keeping me very busy and I just haven’t had the time to sit down and read the book carefully enough to write a responsible review. I will try to get to it next week though. Before that I’ll have another Los Angeles report and probably a report on an old-school Italian place in St. Paul.