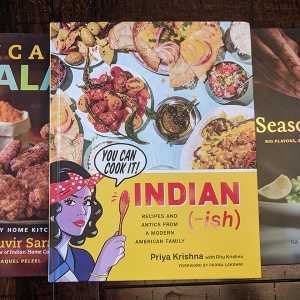 When I wrote the first of my pieces critiquing Indian-American food writing I noted that I was quite looking forward to Priya Krishna’s then-upcoming cookbook Indian(-ish) which promised to cover ground not so very often trod in the American food media: Indian American food. That was last autumn. Alas, my hopes withered in the winter under the onslaught of Krishna’s rather disastrous extended promotional campaign for the book and did not recover in the spring. Disastrous, I hasten to add, from the point of view of substance and accuracy; from the point of view of marketing per se it seems to have been a great success. The book has received a number of strong reviews in the American press and has been praised and promoted all over food social media. I bought a copy of the book as well. I have to admit that I did so largely in the hope that it might provide the kind of comedy not seen in this genre since the publication of Rani Kingman’s Flavours of Madras. The content of much of the marketing certainly pointed in that direction.

I am pleased therefore to inform you that I was surprised to discover that the book is not as bad as I feared it would be and that there are indeed some good things in it. Next week I will go over the things I like about the book and also the things that I have reservations about. This week I have for you a close reading of some aspects of the book’s marketing, a close reading the length of which even I find excessive but which I will give you anyway as I am a tedious blogger with no editor to rein me in. Indeed, I’ve critiqued much of the marketing of the book before on Twitter. I’m going to repeat myself here a bit both to get it down in one place and also because Indian (-ish) the book seems hard to separate from Indian (-ish) the marketing campaign.

I have to say first of all—and here I am displaying my naivete, probably—that I was quite surprised by the nature and extent of the promotional platform Krishna received for this first book: a regular column in Bon Appétit; articles in Saveur and The New Yorker that may as well have been advertorials; a number of cooking videos from Bon Appétit‘s test kitchen and on Vice and so on. Her agent is clearly well-connected; or maybe this is merely yet more proof of how tight the American food media world is. Writers who don’t emerge from that ecosystem don’t seem to get anywhere as much play, no matter what the relative merits of their books may be. But let us set that aside and examine why so many of the promotional outings for the book caused such severe eye-rolling, not only in my sockets but in those of a large number of South Asian readers online.

I will not go over all of these promotional pieces. I’m going to focus on two that are particularly egregious and which are emblematic of problems that continue in the book: a Bon Appétit test kitchen video from December 2018 on the making of “shahi toast” and a New Yorker article from April 2019 on chhonk. Let’s take them in order.

Here is the “shahi toast” video:

Where to begin? Well, maybe at the beginning. I’m not sure why this video begins with conversation about Bollywood…actually, that’s not true at all, I know exactly why it begins that way: it’s because there’s a large subset of American liberals for whom Indian food, Bollywood and yoga are inextricably linked as an expression of their cosmopolitanism; talking about one of these must therefore immediately lead to talking about at least one of the others (all my South Asian American readers are nodding in recognition) and Priya Krishna is only too happy to feed that desire. But that’s not even the issue here: the issue is that Krishna who is listing a number of alleged Bollywood “ripoffs” of Hollywood films gets two out of three wrong: Jab Harry Met Sejal is not in fact a remake of When Harry Met Sally; Krrish is not a remake of Superman (it’s a sequel to a film that borrows elements from E.T). But note how confidently Krishna pronounces on them—she can’t possibly think this if she’s actually seen the films and if she hasn’t she has not bothered to trouble her lazy assumptions about them with even the slightest cursory research. Big deal, you say, that’s not really what the video is about.

But, alas, this proves to be a harbinger of some truly jaw-dropping moments in the actual meat of the video. I’m not even referring to the fact that Krishna goes on as though the most common name for the dish she is making is not “shahi tukda” but “shahi toast” (she lives in an alternate universe where “toast” is the word Indians commonly use for any dish involving bread). No, I am referring to the part at the 2:10 mark where she notes that she doesn’t actually know what the word “shahi” in “shahi toast” means. She says it’s “not a Hindi word I know of”; which, okay, it’s a Hindi word but it’s not a crime for an Indian American to not know Hindi words—but that’s only the beginning of the problem. This leads to one of the generic sitcommy moments of these videos where she calls a family member so they can tell her things that she who has written a cookbook and is producing cooking videos should know. Her father tells her what “shahi” means (royal) but not before she tells us, without any sense of embarrassment that she “didn’t even look this up when I was writing the cookbook”. Oh my lord.

Let me note as well that Priya Krishna—and really the problem is that it’s also Bon Appétit—who cannot be bothered to do research that wouldn’t even strain the abilities of a lazy undergraduate is also then willing to air her father’s opinions about why shahi toast/tukda is called shahi (royal) as though they’re actually worth taking seriously. Filial piety is all very well (and Krishna’s evident love for her parents is always touching) but we all know that random fathers are not good sources of information on anything (see my analysis of another Indian father’s wisdom on mangoes). I will pass over mostly in silence the part where she finally acknowledges the existence of the term “shahi tukda” but only to go on about how “cute” the word “tukda” is. (Thanks, Priya: you’re doing great work in the struggle against the exoticization of difference!) The recipe itself seems like a regulation quick way of making shahi tukda, except for some reason you scorch the bread first, but the quality of the recipe is not my point here; it’s that again Krishna gives her viewer no sense of how commonplace the dish is or isn’t or in what ways she is or isn’t departing from common ways of making it. This, of course, is a standard part of her repertoire. It’s on full display as well in a staggeringly obtuse piece on chhonk published in The New Yorker (The New Yorker!!!).

It is 2019; why are we talking about tadka/chhonk/etc. like it is something new? And also, what language is “Chhonk… twitter.com/i/web/status/1…

The piece begins with an image of Krishna’s mother making dal with “sunflower-yellow” turmeric (as opposed to all the other kinds) and a “handful” of salt. Nobody in the editorial dept. seems to have thought a handful of salt is a bit much but that’s just a little amuse bouche to the feast offered here. The last step of adding chhonk at the end to the dal is Krishna’s focus. Most non-Indian aficionados of Indian cooking already know chhonk as tadka—an utter commonplace of Indian cooking. In 2019 discovering the role of chhonk/tadka in Indian cooking is almost as earthshaking as discovering that a lot of Italian recipes deploy garlic sauteed in olive oil. But Krishna writes about this with the excitability of someone bringing wondrous secrets out to an unsuspecting world. The only way I can account for this is if Krishna herself has only very recently started looking closely at Indian cooking and has in fact only just discovered the ubiquity of this common finishing technique across the country’s foodways (or that of the rest of South Asia)—and she more or less says as much in the piece. I suppose some find this sort of naive enthusiasm charming but cookbooks on Indian food have been published in the US for some five decades now and there are about 50,000 blogs that have gone over pretty much every technique and recipe; it seems a little late in the day to be expounding breathlessly about very basic aspects of Indian cooking.

"In India, chhonk is so common and so essential that practically every region has its own name for it" Could this… twitter.com/i/web/status/1…

This weaponized ignorance extends in other directions as well. I love the bit where she underlines the ubiquity of chhonk by pointing out that different regions have different names for it. Wait till she finds out that different regions have different words for “clueless” as well. She also gives us this parenthetical nugget: “I’ve always thought of the word “chhonk” as an onomatopoeia, approximating the sound of spices dancing around in a pan.” Um, as a food writer wouldn’t it instead be appropriate to confirm if that’s true? Again, there’s no reason why Krishna should know these things in the abstract. But it beggars the imagination that someone who does not know these things should be given such prominent platforms on which to perform her lack of knowledge. I find it hard to imagine such a thing happening for other major world cuisines.

And then there’s the other significant part of her repertoire, which I think can also only be explained by a very narrow and shallow exposure to the material she is writing about: a move in which she performs a sort of proprietary branding of the commonplace. Here an utterly basic chhonk/tadka of cumin and red chillies becomes “my mom’s chhonk”. One or both of two things seems to be happening in moments like these which are repeated in a number of her videos and essays and in the book: a tacit acknowledgment of the fact that she doesn’t know much/anything about these things outside the specific context of her mother’s cooking; and/or an attempt to re-route curious readers back to her pieces. As I noted a while ago in the case of “dahi toast”, if you google “dahi sandwich” (again, by far the more common name for the dish) you will find a cornucopia of recipes and variations; “dahi toast”, on the other hand, will lead you recursively back to citations of Krishna’s recipe.

And so, finally, to the book. The problematic tendencies noted above all continue in the book (the book is after all written by the same person) and are joined by some new ones. But there are also, as I said, things I like about the book, which is not something I could say about any of the marketing. But this is already too long and so I’ll get to all of that next week.

7 thoughts on “Indian–eeesh!: The Marketing”