One of the things I was most looking forward to on this trip to Montreal was a return to the Jean-Talon Market but this time in the summer. The missus and I went there in late October 2016 and we loved it, but it was chilly and there was not very much produce to be seen in the market. I was glad therefore that my group readily agreed to have the tour we did on the morning of our first full day in Montreal culminate at Jean-Talon. That tour, by the way, was organized by a wonderful group called L’Autre Montreal. They did a custom tour for us that went over Montreal’s immigrant history, starting in Old Montreal and ending in Parc Extension, where many more recent immigrant communities reside. I recommend them highly to anyone looking for an interesting introduction to the city (and I recommend our excellent guide Leah as well). After a three hour tour the bus dropped us off at Jean-Talon and there we dispersed into small groups to eat what caught our fancy and to wander the market. Herewith the photographic evidence.

Perhaps I should be embarrassed to say that I did not try anything that I had not eaten in 2016 but I am not embarrassed. Along with a couple of friends, I started with a dozen oysters at La Boite Aux Huitres and ended with pasteis de nata at the bakery/cafe at the center of the market. We would have had more but we had an excessive dinner planned for that night (on which more later).

First up are the pictures of the market proper. Then the oysters. When we were there in colder weather the oyster eating happened entirely inside the big fishmonger at one end of the market. In mid-June, however,  while the counter was still inside there were benches and high tables outside. There was also another counter set up outdoors but it wasn’t yet in use. It was a lovely day—though to be frank it’s always a lovely day when you’re eating oysters. We ordered two dozen: my friends ate half a dozen each and to be safe I ate a dozen. I was very tempted as well by all the other seafood on offer—especially the lobster and the deep-fried stuff—but the aforementioned excessive dinner loomed. We also had an afternoon meeting coming up and I did not want to fall asleep. I do feel proud that I managed to restrict myself to half each of two pasteis de nata to follow and to resist the pulled duck poutine with foie gras gravy that almost killed me in 2016.

Take a look at these pictures and scroll down for a bonus mini-slideshow from another place I returned to with the group. 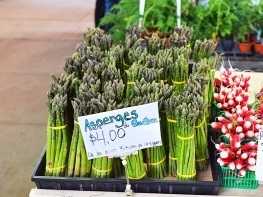 These looked so good. Happy to report that after the excellent Quebec asparagus the night before at L’Express we had some more for dinner this evening as well. 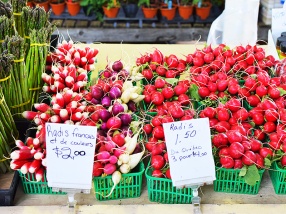 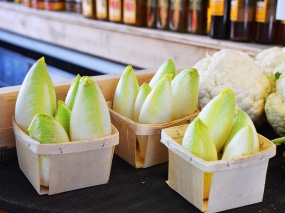 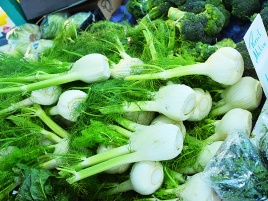 I believe these were labeled as “graffiti eggplant”. 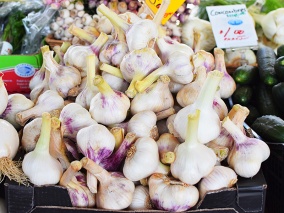 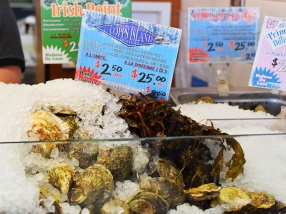 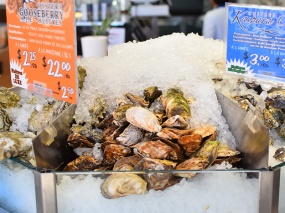 Our order. I was hoping for a wider selection but the gent at the bar brought us six each of four varieties. Probably a reflection of the different season but there were no repeats from the 8 varieties we had back in 2016.

A little sweet, a little briny. From Prince Edward Island.

Lemony and briny. From New Zealand. 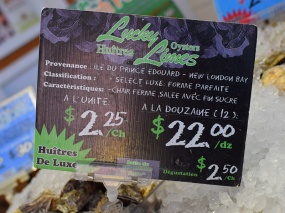 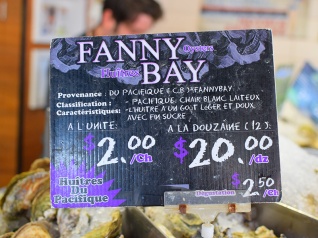 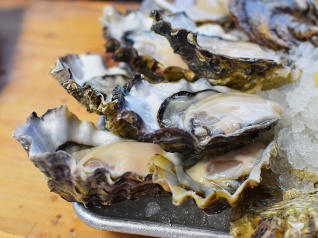 These are from British Columbia. Colossal, meaty, firm. These would probably be very good baked or grilled or fried. Very tasty right out of the shell too.

I do like a splash of Tabasco on a plump oyster.

I didn’t try this one; I think it may have involved raspberries?

I forget the name of the vendor.

One maple, one regular.

I still hope that on my next trip to Montreal with the missus we’ll get an AirBnB and do some actual food shopping from Jean-Talon and do some cooking. And on the next visit I’ll try to finally make it to the Atwater market as well.

This stop, a little earlier in the day, was not planned by me but by our tour guide. I was, of course, very happy to make a return here as well and to munch on a recently prepared sesame bagel. I took a few more pictures of the bagel making this time than I had on my first visit in 2015. I don’t know what the bakery was like in 1957 when they opened but going in there feels a bit like going back in time. I’d guess. however, that the ethnicities of the workers in 1957 would have been very different than they are now.

Bags and bags of it. 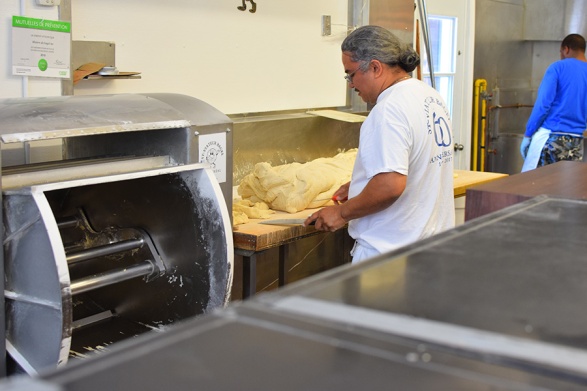 Working and shaping the dough. 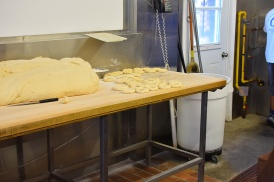 Alright—for my next Montreal report I will go to another immigrant neighbourhood, the Cote des Neiges, for a meal in a genre I was not expecting to eat in in Montreal: South Indian. But there’ll be another report each from Minneapolis and Toronto before that.