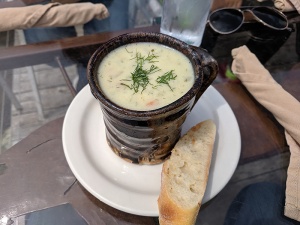 We’re back from our five day sojourn on the North Shore. We’d rented a cabin a little north of Lutsen and descended on it with our brats, our dogs, and my visiting parents. The cabin was lovely, literally right on the water; the mosquitoes decidedly less lovely and literally right on us. (We will definitely go back to the North Shore in less than 12 years but we’re never going in July again.) As our cabin had a fully equipped kitchen, and as we’d taken provisions with us, we cooked and ate breakfast and dinner in but went out for lunch every day. And as the cabin was just about a 20 minute drive from Grand Marais, we visited and ate there more than once. On our first full day there we stopped in at the Angry Trout, a restaurant that will be recommended to you by pretty much everyone to whom you mention that you are looking for places to eat at within hail of Grand Marais. Herewith the details.

Angry Trout (or the Angry Trout Cafe) is located right off Highway 61 as you enter Grand Marais from the south. Parking is easily found along the side of the highway. If you show up at the prime lunch hour on a cool, foggy day with a group of six, however, a table may not be as easily found. This because they didn’t have their very attractive outdoor area open at first. But after a bit of a wait (we were told 25 minutes) we noted that we’d be happy to sit outside and they gave us a table there. The sun came out soon after and the deck filled up in short order. If you don’t want to sit outside, they have two dining rooms inside.

The restaurant has an ethos of environmental and community consciousness (see the first and last pictures from the menu in the slideshow below) but if they didn’t tell you about it you wouldn’t really get a sense of that from the menu, That is to say, what they do at lunch is a fairly standard-issue menu of things you’d expect to get at a place like Angry Trout in a lakeside town like Grand Marais: a lot of salads and sandwiches and things revolving around fresh fish. There is at least one place in Grand Marais that you can go for a more interesting lunch (we ate there two days later) but interesting food is not particularly what we were after or what Angry Trout seeks to put out. There are no flourishes here—beyond edible flowers on a salad—but what they do they seem to do quite solidly. All six of us enjoyed our meal, especially in the setting.

For a look at that setting and the food, launch the slideshow below. Scroll down for thoughts on service, price and value. 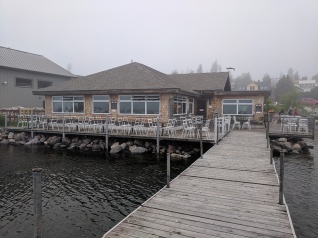 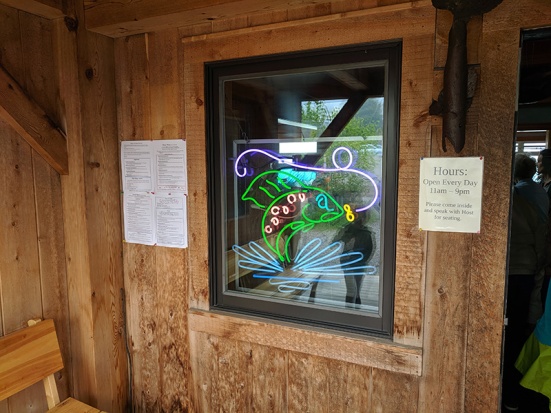 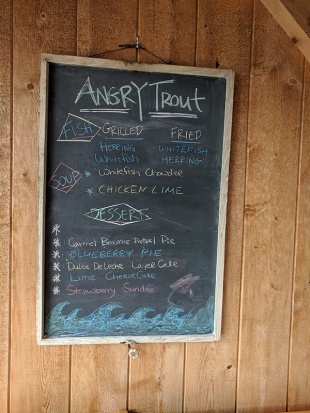 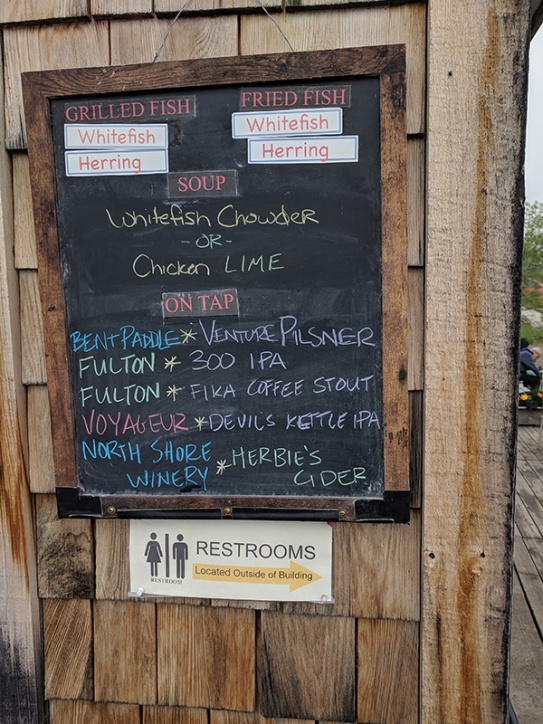 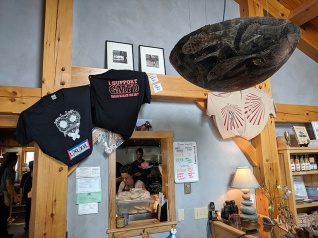 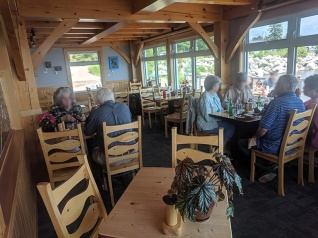 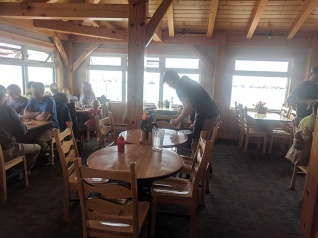 The menus are made from recycled materials. 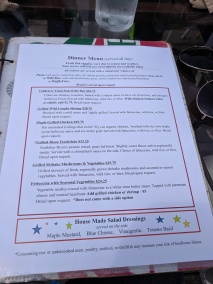 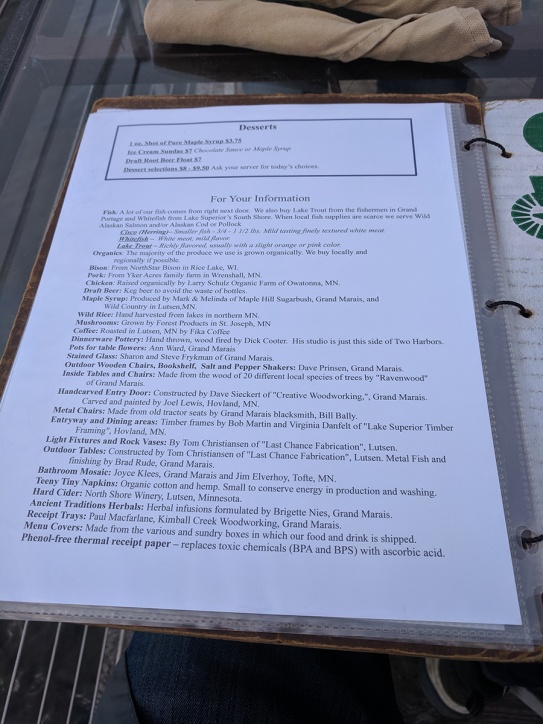 Part of the kids’ meals.

Adult portion featuring one of the two local fish from the day’s catch: whitefish. 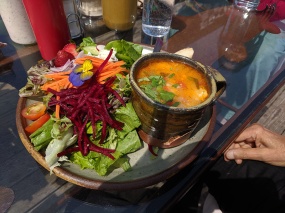 The soup was one of the daily specials: chicken and lime. 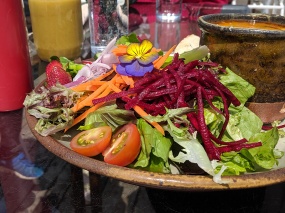 This was the other soup special. This was mine and I quite liked it. 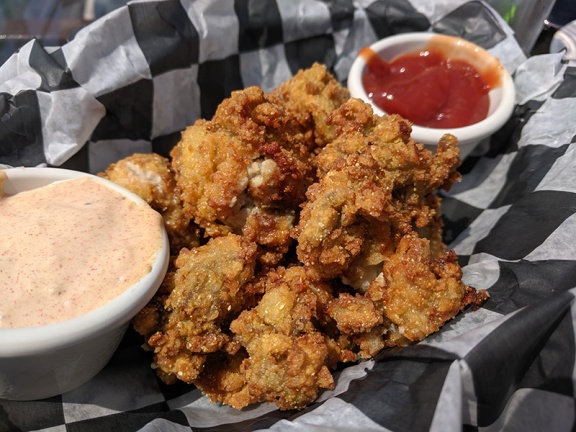 And I liked these too. 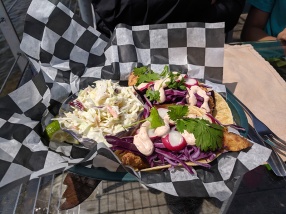 The missus got fish tacos with the other fish of the day: lake herring.

Service was friendly but a little harried at first. But as the crush cleared out we saw more and more of our server and more relaxed expressions on everyone’s faces. Price? All of the above came to $107 with tax and tip. Not that expensive for six people but frankly, that’s a bit too much in the abstract for what this was. Our meal at OMC Smokehouse in Duluth was cheaper and was much better. Yes, restaurants like this in highly touristed areas—and Grand Marais is the center of things this far north on the North Shore—are always going to charge what you might think of as a tourist surcharge but this still seemed a little steep.

And it became more steep still when I discovered tonight that we’d in fact left a 40% tip, taking our total past $125! This because they’d included a 20% gratuity on the bill but not drawn it to our attention while presenting it. Paying in a hurry we didn’t notice. That’s on us but it’s always nice when a server makes sure you know the tip has already been added (as in fact happened at the aforementioned other Grand Marais restaurant a couple of days later). Oh well, maybe I’ll give the restaurant a call tomorrow and see if they might be willing to credit that inadvertent double tip back to the card*.

I’ll have a few more North Shore reports in the next couple of weeks. Next up though will be a report of a recent dim sum meal in Minneapolis that will be sure to earn me even more friends and well-wishers in the local food community.

*I did call the restaurant and the person I spoke to both noted that the automatic application of the 20% gratuity is noted on the menu and that it is in fact confusing. She also readily agreed to credit the double tip back. I very much appreciate this. I know there are some people who think it is very bad form to ask for a tip to be refunded but I see this case as one of requesting refund of mistaken payment not a tip. If I had accidentally written in a double tip—because of poor math or whatever—I would never have called. But I’m sure neither the restaurant nor the server is trying to make unearned money off distracted customers.

Leave a Reply to My Annoying Opinions Cancel reply