Back to the North Shore. My previous review of a Grand Marais restaurant really bothered a few people on a North Shore Facebook group. I thought it was a positive review with a couple of caveats but it appears that for some people anything short of a rave qualifies as a pan. One of them went so far as to tell me that I should preface all my reviews with the phrase, “I have no credibility but this is my opinion…” Accordingly, I inform you that I have no credibility but this post contains my opinions of our lunch at the Crooked Spoon Cafe, eaten a couple of days after our lunch at the Angry Trout. Please don’t take it too personally but I liked it.

That morning we drove up to Grand Portage to do the gentle “hike” to take in views of the High Falls. It’s a lovely drive and an easy trail and the view of the falls are indeed very lovely. There are much longer and harder hiking trails there too but with young kids* and old dogs and my general laziness we weren’t up to any of them on this trip. Once the kids are a little older we’ll take a stab at some of those. After that visit, which took us almost to the Canadian border—and this reminds me that I have to call my cellphone provider and have them take off the international roaming charge they hit me with for that day—we drove back down to pick up my parents from the cabin and then went back to Grand Marais for lunch at the Crooked Spoon. They take reservations for parties of six and up and we had made one.

It’s a small and very pleasant restaurant. It doesn’t have the Angry Trout’s dramatic “on the lake” location but it does have more interesting food. Awards won by the chef include one for “artistic flair” and I don’t mind admitting that this made me worry a little when I saw it. But these worries were ill-founded: nothing particularly whimsical showed up and no unlikely combinations—who knows, perhaps the flair is more evident at dinner. That said, the options at lunch are not of the predictable tourist town greatest hits collection: there is a burger and the requisite fish sandwich but there’s also chorizo sliders, pork belly lettuce wraps and roasted potatoes with pesto and so forth. The kids’ menu too has a number of interesting options. So, what did we eat?

One kid got the pepperoni pizza and the other got the grilled chicken kabobs which came with a rather excellent barbecue sauce involving cumin that he enjoyed as much as his thieving parents did (not sure why it came in place of the billed ranch dressing but I’m very glad it did). Among the adults, one of my parents got the “Lake Superior fish of the day” sandwich and the other got the aforementioned roasted potatoes. They both enjoyed their meal. The missus and I split an order each of their cold meatloaf sandwich and their pork belly sliders and liked both. Sides included a rather good spicy cole slaw and acceptable pickled beets. I also got a side of their cherry bomb chile ketchup which I liked almost as much as the barbecue sauce. This ketchup was also smeared on the meatloaf.

To drink I put together a flight of mini-pours of four North Shore beers: three from Grand Marais’ own Voyageur Brewing Company** and one from Two Harbors’ Castle Danger Brewery. Of these I most enjoyed the VBC Sled Hound Session IPA (not obnoxiously hoppy) and the Castle Danger George Hunter Stout. The others stuck to water and none of us got any dessert as we had another date with World’s Best Donuts scheduled for right after this meal (I’ll have more on those donuts next week, probably).

For a look at our food and the restaurant, launch the slideshow below. Scroll down to see how much it cost, what we thought of the service and value and all the stuff that so pissed people off in my Angry Trout review!

They have a bar too, it seems. 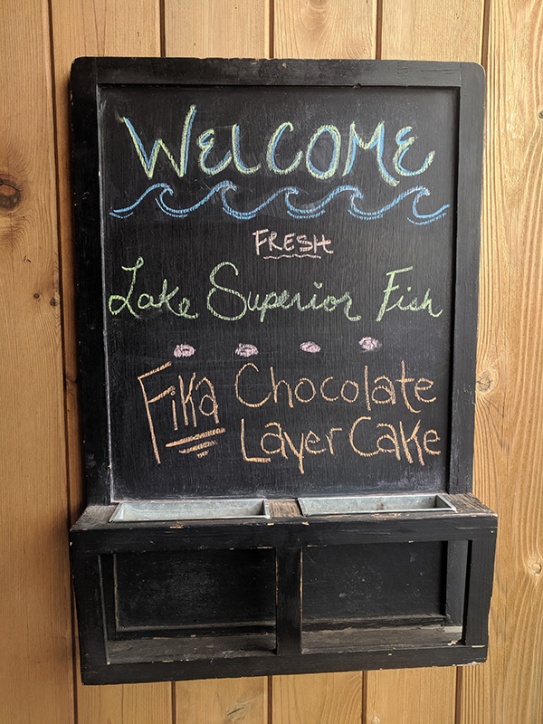 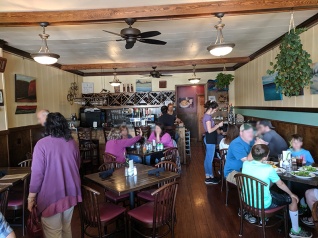 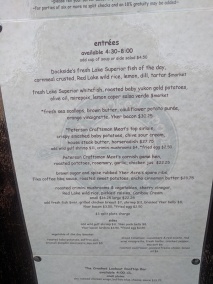 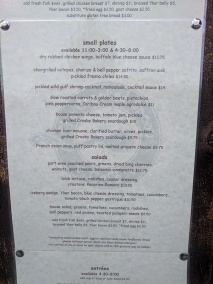 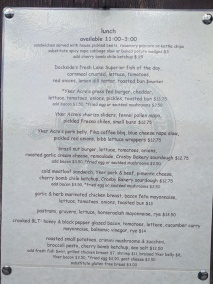 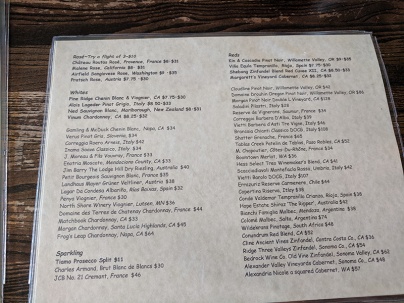 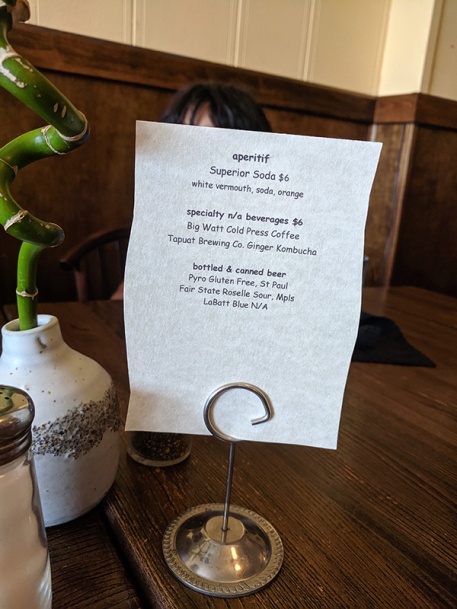 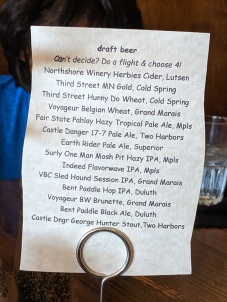 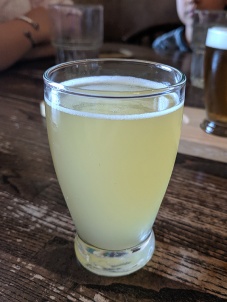 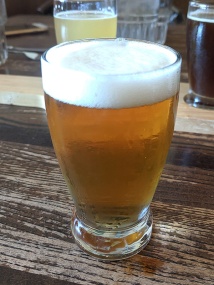 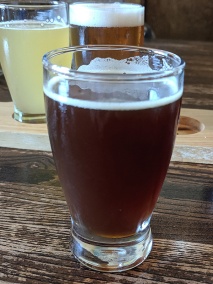 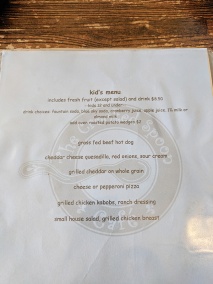 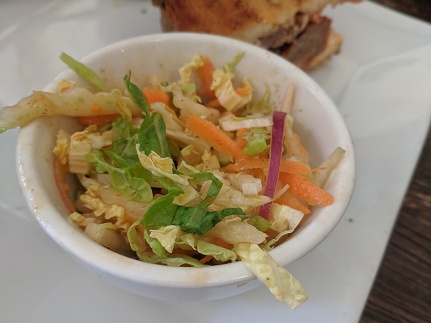 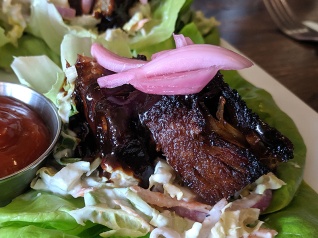 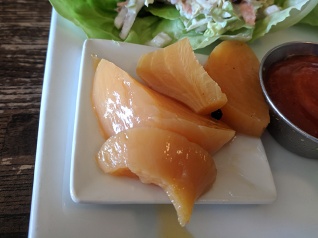 Price: this cost almost exactly the same as our Angry Trout meal: about $110 with an 18% tip. Speaking of the tip, like the Angry Trout, the Crooked Spoon adds an automatic gratuity for parties of 6 or more. Unlike at the Angry Trout, however, our server went out of her way to make sure we knew that tip was already on the check. And service was less frazzled and more friendly all-around. And where we thought that the Angry Trout was perhaps a little more expensive than its food warranted, we had no such caveats about the Crooked Spoon. The food was both tasty and interesting (and we particularly appreciated the non-cookie cutter options on the kids’ menu). On our next trip to Grand Marais we might even check them out for dinner and more of the chef’s artistic flair.

Okay, coming next from Grand Marais: either the not-very good lunch we had in between our visits to Angry Trout and the Crooked Spoon or an entirely positive account of eating donuts and smoked fish and fudge (though not all at the same time). Which it’ll be will depend on how much abuse I am in the mood for receiving from well-adjusted strangers on the internet.

*I was going to say “brat’ but this also upset a couple of people on the aforementioned Facebook page; and I want those people to know that I have learnt the error of my ways and for at least the rest of this post will refer to my brats/bastards only as “kids”. I make no promises for the future.

**I hadn’t even realized that there was a brewery in Grand Marais. It wouldn’t have been possible on this trip to visit Voyageur Brewing Company as they only do visits on Saturdays and we left on the Saturday morning—but on our next trip I will check them out for sure.