I said my next New York restaurant report would be of a newer, mod-ish Indian place. I lied. Again. Instead I have for you a report on an older, very far from mod-ish Jewish deli. Deal with it.

We ended up at Pastrami Queen on the Upper East Side for two reasons: 1) we needed to find a place to eat within walking distance of the Met; and 2) we wanted the boys to try pastrami and other Jewish fare in New York and didn’t want to deal with the madness of Katz’s. Not knowing much of the New York deli scene I didn’t actually realize that we were eating anywhere significant till after our meal when I looked them up. It turns out they’re pretty celebrated and are reputed to serve some of the best pastrami in the city.

Pastrami Queen’s website says “since 1956” but that’s not entirely accurate. That is to say, while the business opened in 1956 it did so with the name Pastrami King and was then located in Willamsburg. From there it apparently moved to Queens and then to the Upper East Side of Manhattan. You might think the name change happened with the first location change but as per the web they adopted the new name on opening on the UES. Earlier this year they’d apparently opened a branch in Midtown but that closed just a few months later. So, though we didn’t know it, we were eating at a deli with some history including some recent turbulence.

The UES location, at 1125 Lexington, is pretty small and not at all fancy and not at all old world in feel. There’s a large deli counter as you enter, a kitchen alongside, and a small dining room that seats maybe 20 people. The counter is, I think, for to-go orders. If you’re eating in, as we were, you order at your table. The menu encompasses the standard deli repertoire and we partook of a few of those standards. We got one pastrami sandwich, one corned beef sandwich, one potato knish and one pint of matzo ball soup. The sandwiches and the knish were both rather large and all of this food fed the four of us well.

What did we think of it? Of the sandwiches, the younger boy and I liked the pastrami best (though I do prefer the moister, fattier versions at Schwartz’s in Montreal or at Katz’s) and the missus and the older boy were partial to the corned beef (which I also liked). The rye bread was excellent. The matzoh ball soup was quite good; the knish was quite overpowering in its tonnage. The pickles served alongside were excellent.

For a quick look at the space and the food, launch the slideshow below. Scroll down to see how much it all cost, for what we made of it on the whole and to see what’s coming next. 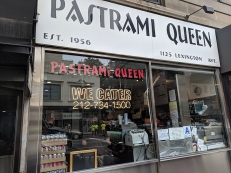 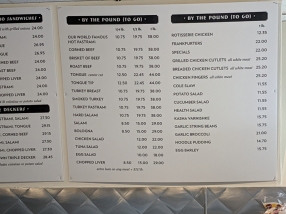 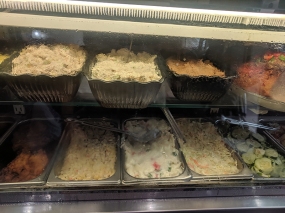 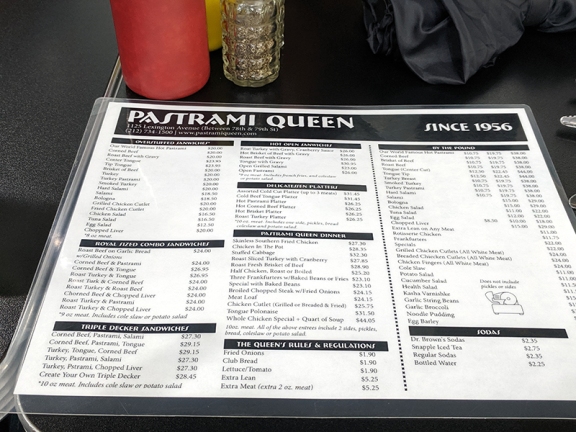 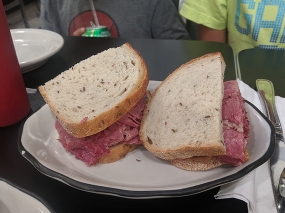 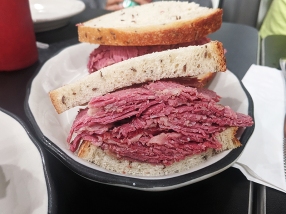 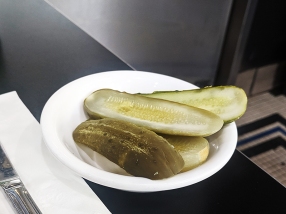 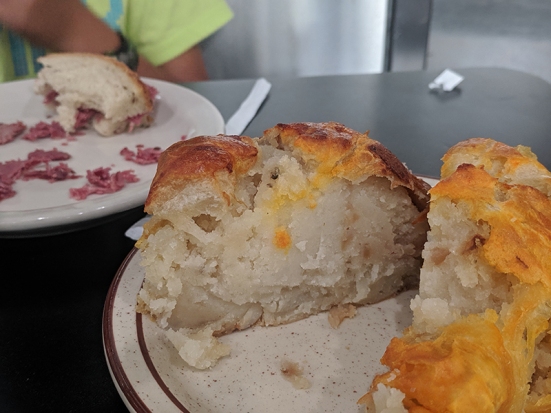 Service was very friendly and present (and also largely Bengali). The bill for all of the above came to $73 before tip. Not cheap but $70’ish plus tip was par for the course for most of our more casual meals in the city—and this was quite a bit cheaper than the UES lunch we’d had on a visit to the Met a couple of days previous (the Met is no longer free but tickets are valid for three consecutive days—which you’ll need to make any kind of dent in their collection). That other meal involved sushi and I’ll get to it next week. And I really will try to get to the report on the mod’ish Indian place this weekend.

In the meantime, I recommend Pastrami Queen highly if you’re museuming on the UES. Is it worth a hike across town or from another borough for its own sake? Well, probably not unless you’re really into deli food. As for us, we’ll probably be back on our next trip to the Met, which will be whenever we’re next back in New York. And if we stay at the same place on the UWS on that trip as well then we’ll also get to Barney Greengrass—we’d really wanted to go this time as well but couldn’t make it work. If you have recommendations for other delis or purveyors of fine smoked meat, please write in below.