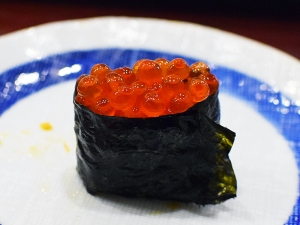 My thoughts about sushi in Minnesota have been aired so often even I am sick of hearing about them. Suffice it to say that whenever we are in a city that presents the chance of eating actually decent sushi we take it. New York is such a city. We can’t afford Manhattan’s high-end sushi bars, so there was no question of a no-holds-barred omakase experience. In fact with our evenings pretty booked there was no chance of sushi dinner at all. And with the days dictated by things we were taking the boys to see and do the challenge was to find a decently rated but not extravagantly expensive place we could go for lunch without making it a destination in itself. The Sushi of Gari location on the Upper East Side fit that bill perfectly with its relative proximity to the Met. How did it pan out? Well, it was, as expected, much better than anything in the Twin Cities, but it wasn’t anything so very special either. Details follow.

There are a few locations of Sushi of Gari in Manhattan and there is now a location in Los Angeles as well. The Upper Eastside location is the original, having opened in 1997. The calling card of the namesake Gari—the chef whose sushi it is: Masatoshi “Gari” Sugio— is innovative toppings and sauces. We didn’t see a whole lot of that at this lunch but the little we saw of it we weren’t terribly impressed by. What we also didn’t see—and this is a big part of why the meal didn’t impress us very much—was much variety in the fish or particularly high quality in what there was. It was mostly a vanilla selection of fish: everything interesting on the menu was said to be unavailable; when I pressed our server he said that things like aji and shima aji were reserved for dinner. Well, if what had been available had all been exemplary that might have been okay but very little of what we ate rose above the merely decent. I should add that the technical aspects all seemed very solid indeed—at least to the extent to which we are able to judge these things.

Of the “innovative” pieces the salmon-tomato—salmon nigiri topped with an extravagant, chunky tomato sauce—really didn’t do it for us and I wish we had not given into our server who kept pushing it. The fish disappeared into the tomato and the tomato was just ho-hum. The kanpachi and the Spanish mackerel likewise had just a bit too much going on. I should say at this point that I do not object to innovation per se in sushi—we loved Kiyokawa in Los Angeles in its heyday and nothing here approached the more baroque or whimsical creations of Satoshi Kiyokawa. We just thought the innovative saucing we encountered was a bit too cloying. Highlights were the unadorned saba/mackerel and the ikura/salmon roe, both of which were presented sans adornment.

To see what else we ate and for a look at the space, please launch the slideshow below. Scroll down to see how much all this cost and to read about an alarming development that manifested itself at this meal. 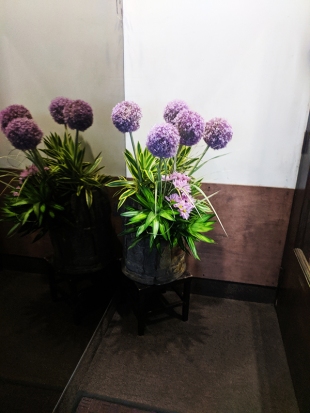 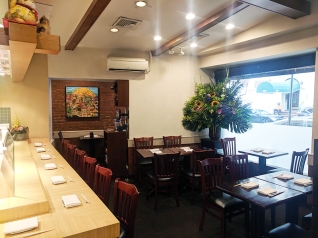 Empty when we got there but beginning to fill up as we left. Nobody at the sushi bar though. 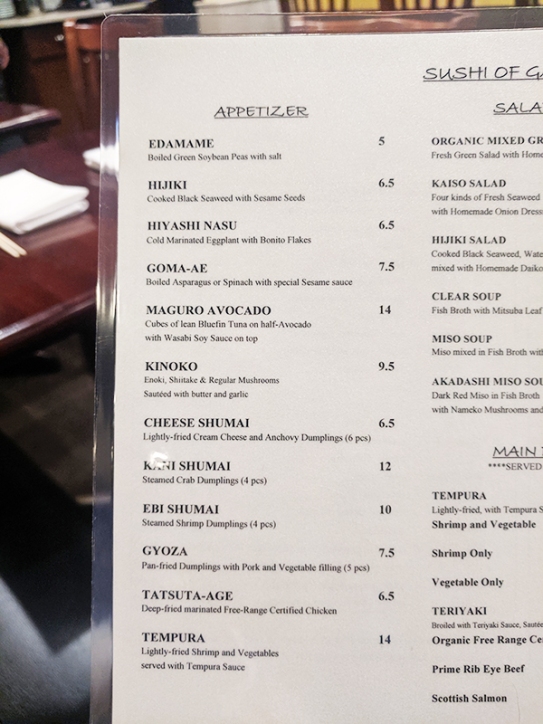 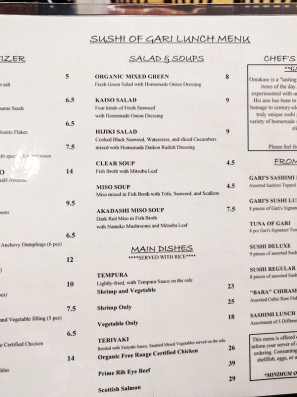 A salad with four types of seaweed in onion dressing. This we liked.

And the boys liked this.

Perhaps the set nigiri offers better value/selection at lunch but no substitutions are allowed and we don’t do bluefin. 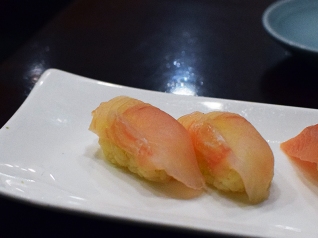 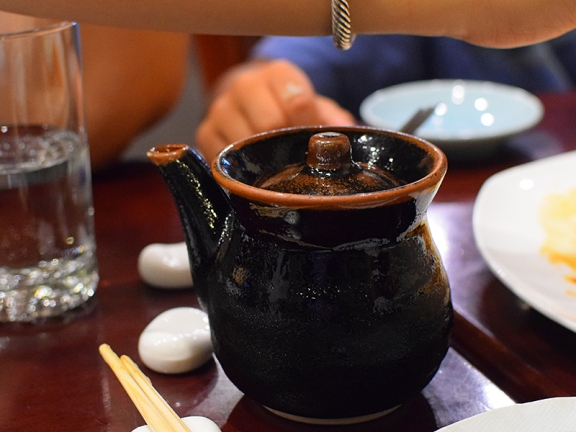 The first piece of shrimp for the older boy.

Who then asked for eel and yellowtail.

We were not fans. 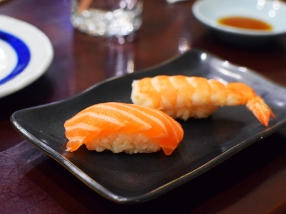 The older boy then wanted to try salmon while his younger brother asked for a piece of shrimp. 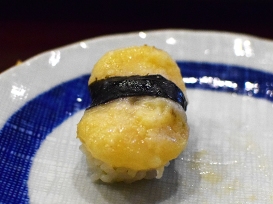 I would have preferred non-sauteed scallop. 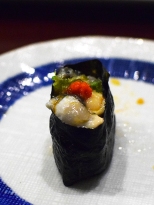 The oyster survived the garnishing better. 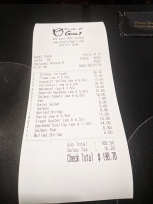 All of the above came to $240 or so with tax and tip. Taking out what the kids ate we’d probably be at just over $90/head all-in for the two of us. This may not seem like a lot for 9-10 pieces of fish (the missus did not get the ikura) at a well-regarded place in Manhattan but you can do MUCH better for the price at lunch in Los Angeles in terms of both variety, fish quality and for that matter innovation (at a place like Kiriko).

Which brings me to the alarming development. Usually, when we take the kids to sushi they split a teriyaki or tempura plate; usually, the older boy insists before we get there that he wants to try sushi but after eating an order of cooked shrimp nigiri he withdraws. At Sushi of Gari, however, he did not withdraw and his younger brother decided he wanted to try some as well—on top of the large teriyaki plate that they split and enjoyed. This drove the bill up and filled us with a mix of happiness/pride that our kids are finally developing a taste for sushi and great ambivalence about the financial cost of this development. Maybe we should take them to some place in the Twin Cities to try and cure them of this.

Okay, up next from New York: a stroll through an urban food hall and market (plus casual lunch there). Up next from the Twin Cities metro: probably a report on another suburban Indian grocery that I happened on recently.