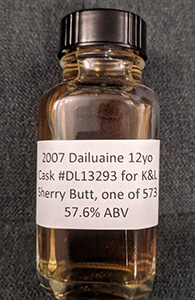 On Friday I had a review of a 9 yo Dailuaine from a sherry butt, bottled by the SMWS. Today I have another sherried Dailuaine. A bit older at 12 years of age, this one was bottled by Douglas Laing in their Old Particular series for K&L. This is one of the very last reviews I have left outstanding from my bottle splits of K&L’s 2019 exclusives. I’m hoping it will turn out to be one of the better ones. I’ve liked some of the others but the most recent one I reviewed—the Bunnahabhain 30—left me a little cold. Hopefully this and the Glenburgie 21—which is the only other one I haven’t gotten to yet—will take this series to a solid conclusion.

Nose: Quite similar to the SMWS 9 yo off the top; a siimilar mix of orange peel, raisins, metallic notes—a bit more malt here. As with the SMWS, theres salt here too as it sits; the malt expands too. Not much change at first with a few drops of water: salt is still the top note. As it sits again it gets a little richer with toffee and just a hint of tobacco.

Palate: As promised by the nose but with a lot of salt arriving as I swallow; not much sign of oak. Very approachable at full strength though there’s a bit of a bite. As it sits the malt picks up some powdered ginger. A similar story as on the nose with water: softer and richer with more malt and some toffee.

Comments: I have very little to say about this that I didn’t say about the 9 yo. This is a little richer than the younger one but not so very distinctive either. But, like the other, it’s solid young sherried whisky all the same. Not an overpowering sherry bomb: no big fruit and no oak grip; instead it’s the drier, saltier aspect of sherry that is in the lead. I liked it a little bit more than the SMWS cask. And I liked it better with water.