One of the highlights of the farm we have a CSA share with—the excellent Open Hands—is their U-Pick program which allows members to pick a number of crops for themselves over the course of the growing season. Strawberries, cherry tomatoes, tomatillos and herbs are some of the highlights, and early in the season so are peas. We get shelling peas as well as sugar snap peas. It’s a fleeting window but a tasty one. We recently picked a fair bit of sugar snaps and to use them up one of the things I made with them this week was this dish that falls in the general Bengali genre of the chenchki: a simple prep that involves at the least mustard oil, panch phoron (or just kalonji/nigella), turmeric, red chillies and a vegetable. You stir-fry the veg and then cover the pan and let it finish cooking either in its own moisture or with the help of a little bit of water. Ginger and green chillies are often added as well but I decided to leave them out so as to feature these lovely sweet pea pods more clearly. I did add some potatoes for contrast.

The more traditional green legume for in Bengali cooking is sheem which is, I think, the hyacinth bean; but in practice snow peas are commonly substitutable—in fact when visiting us my parents make no distinction between the two. And sugar snaps are just another remove or so away. At any rate, they work well here. If you have hyacinth beans or snow peas, by all means use those instead. 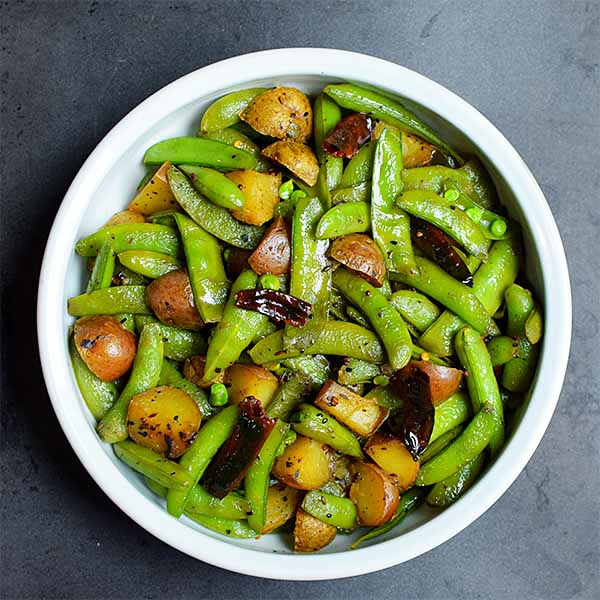