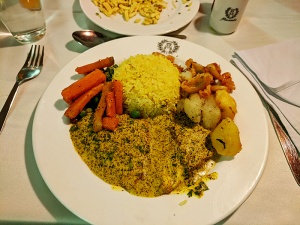 Here, finally, almost exactly six months to the day we left the city, is my last meal report from Calcutta. It’s not a meal I’d thought we’d have before the evening of but it’s a meal I’m glad we had and a meal we enjoyed—none of which is to say that the food was anything special. That probably sounds enigmatic but don’t worry I’m about to tell you what I mean. Mocambo is one of a few establishments located on or near snazzy Park Street that have been around since near the middle of the 20th century and which have together formed a locus of a particular kind of wealthy Calcutta cosmopolitanism. Names like Peter Cat, Bar-B-Q, Trincas and Mocambo have both evoked nostalgia for a long time for the city’s elite and maintained their popularity even as a new generation of restaurants and, in particular, restaurants serving Bengali cuisine, have sprung up around them. These were aspirational places in the 1970s and 1980s—before the rise of 5-star hotel restaurants—and Mocambo, the place that more than any other defines Calcutta Continental food, continues to be packed on weekends in early February well into the 21st century.

But as I said, we weren’t planning to eat there. I wanted the missus to get a taste of the Calcutta Continental experience but had figured that dinner at the Belvedere would take care of that. On the Saturday that we ate at Mocambo we were actually supposed to meet an old friend for dinner at one of her favourite places, Bohemian, which she said did interesting mod takes on Bengali food. She messaged me early in the evening though, completely shaken by the discovery that Bohemian had out of the blue closed and turned into a Punjabi dhaba! Where to go instead? We again considered a Bengali restaurant, but we’d eaten a blowout lunch that day at the home of an aunt who is one of the two best cooks I know. She doesn’t cook anymore, only supervises, but it’s hard to find Bengali food better than that served at her house and so we were not in the market. My friend suggested Mocambo instead as a kitschy alternative and we decided to go for it.

I should say that, as with the Tolly club experience, this was another case of my finally experiencing, right before my 50th birthday, aspects of elite Calcutta life that I’d constantly heard wealthy classmates at my boarding school in Darjeeling talk about in the mid-1980s but which I’d never myself experienced then. When my family visited Calcutta the only restaurants we could afford to go to were minor Chinese places. And so I decided to go for it even though I’m not particularly enamoured of Continental food. The kids, however, were very excited. After a month of Indian food of one kind or the other at every meal they’d really enjoyed the more familiar fare at the Belvedere and were excited to have some more of it.

If you look carefully at the pictures of the menu in the slideshow below you’ll get a good sense of what Mocambo’s shtick is. They serve a sort of simulacum of European food as passed through a colonial blender; the kind of food that might have once made people on the outposts of Empire flatter themselves into thinking they were closer to the center than they were (the waiters still dress as though expecting white not brown sahibs). How seriously anyone ever took that or takes it now, is a different matter. The menu seems to be quite aware of the shtick, right down to the insistence on the use of the word “beckty” for the Bengali fish “bhetki”.

What did we get? The boys split the tomato soup to start and the missus and I split a cream of chicken soup. Both were unmemorable. From there we went straight to the mains. I got one of their classic dishes, “Fish a la Moutarde”; yes, involving “beckty”/bhetki. This was somewhere between a French and Bengali shorshe baata preparation and as tasty as it was uninteresting. The missus got the “Beckty Bell Meuniere” which was tasty enough. Our friend got the chicken meuniere which was also pleasant in an anonymous kind of way. One of the boys got the spaghetti with meatballs (an enormous portion) and the other got a massive breaded chicken cutlet. The grown-ups passed on dessert but the boys demolished a large brownie and a Thums Up float respectively.

For a look at the space and the food, launch the slideshow below. To see how much it cost etc. and to see what’s coming next, scroll down. 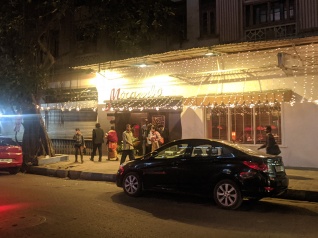 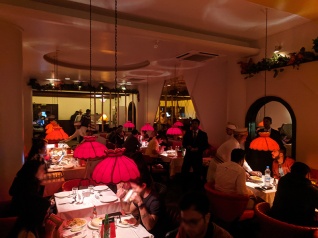 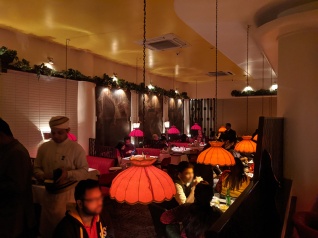 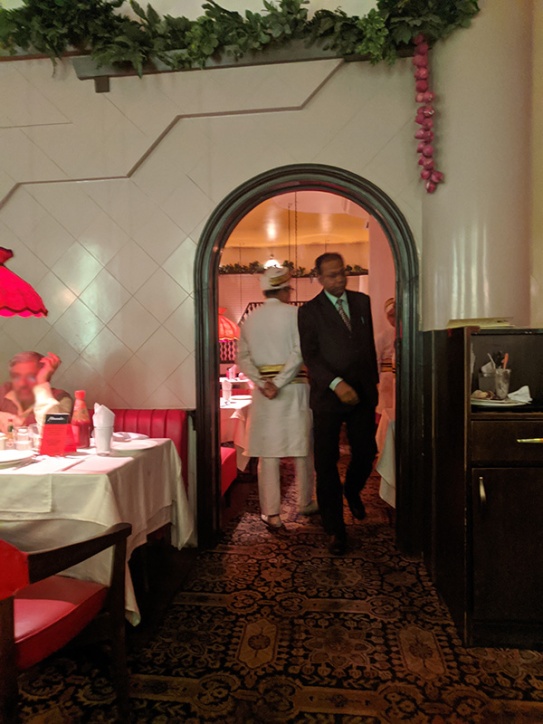 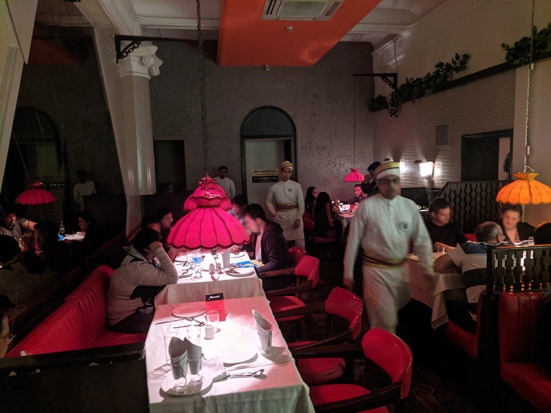 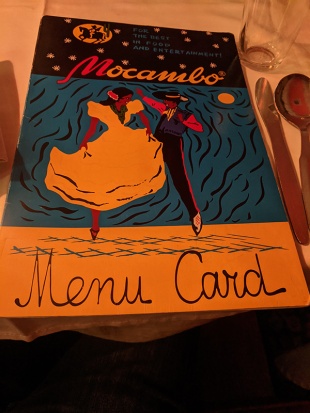 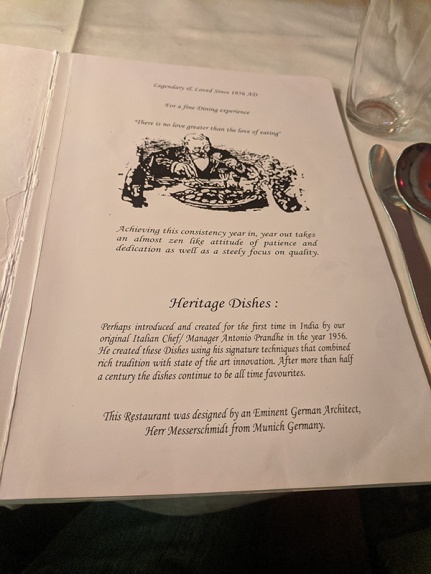 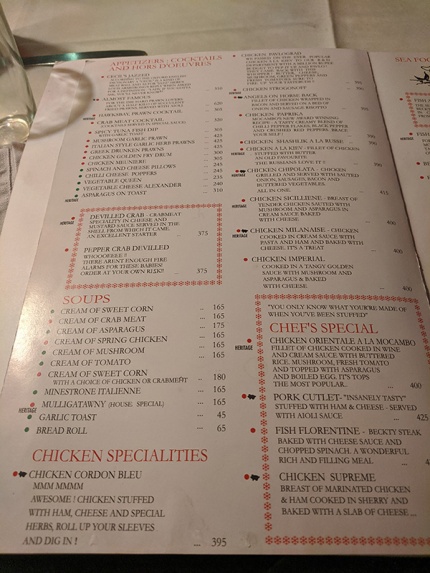 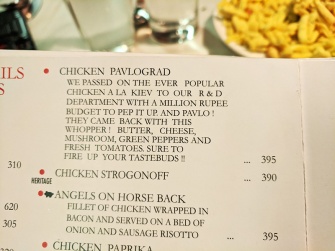 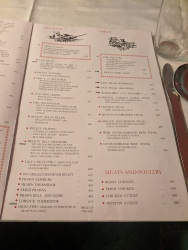 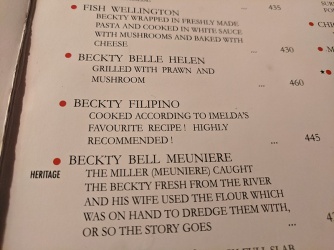 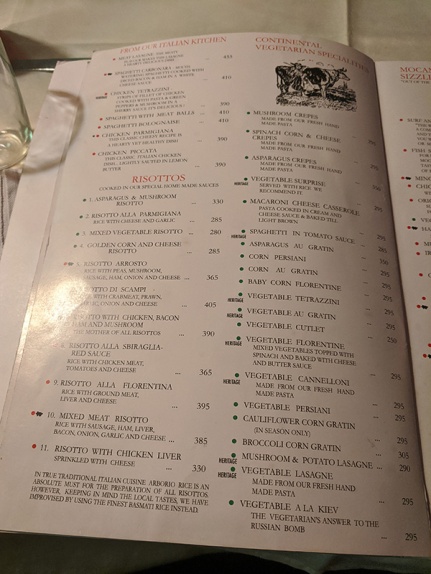 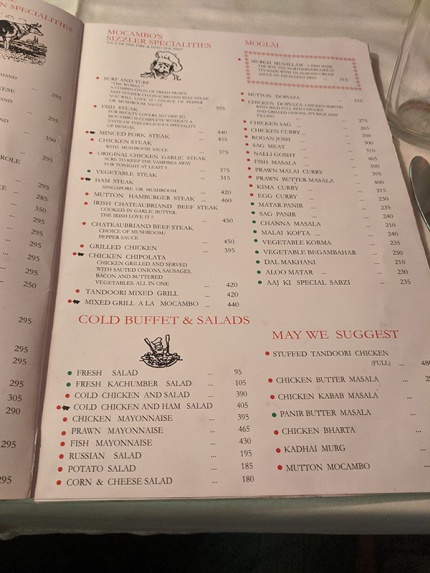 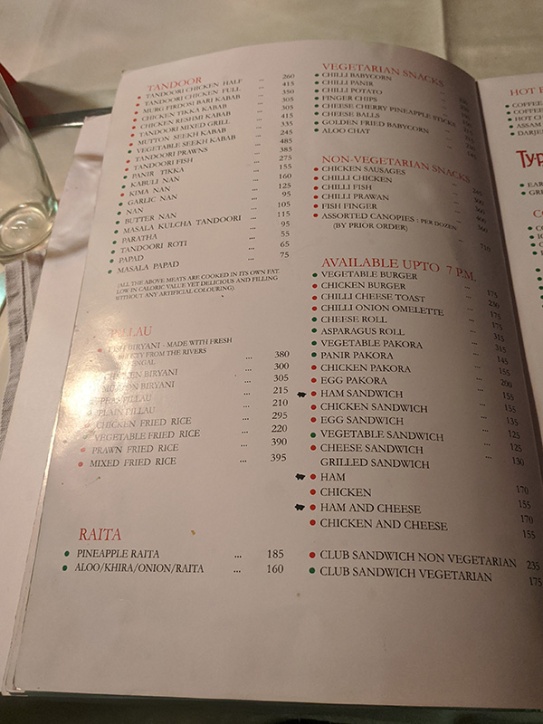 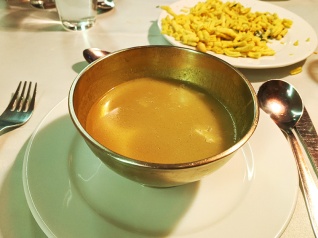 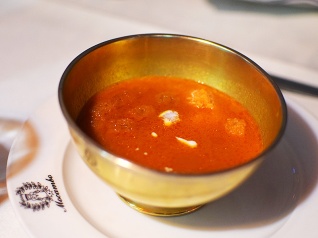 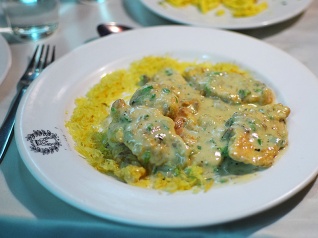 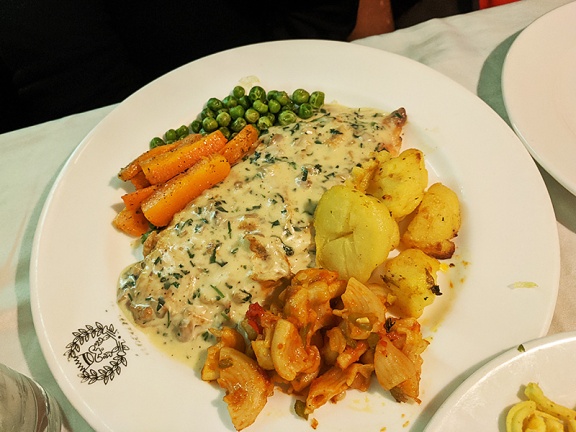 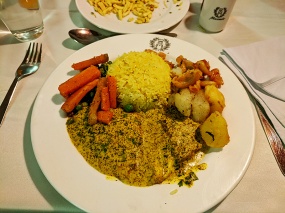 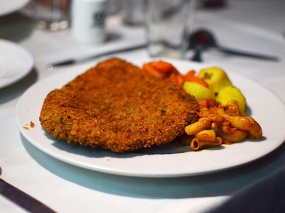 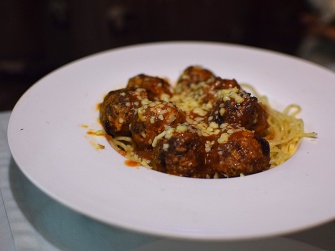 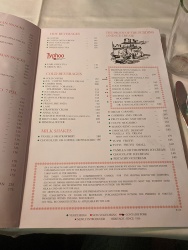 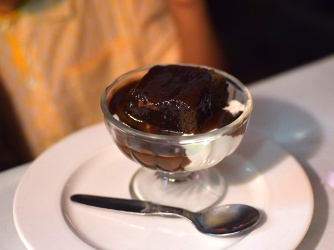 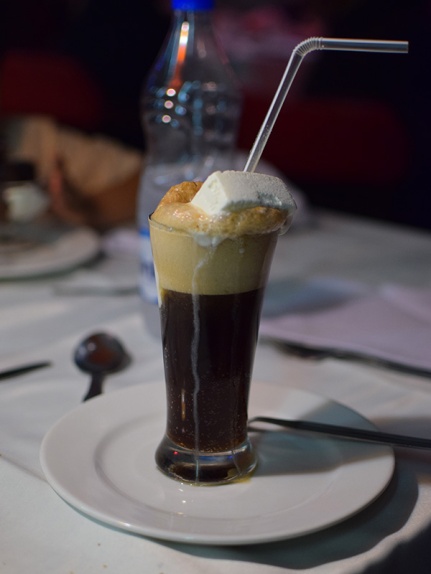 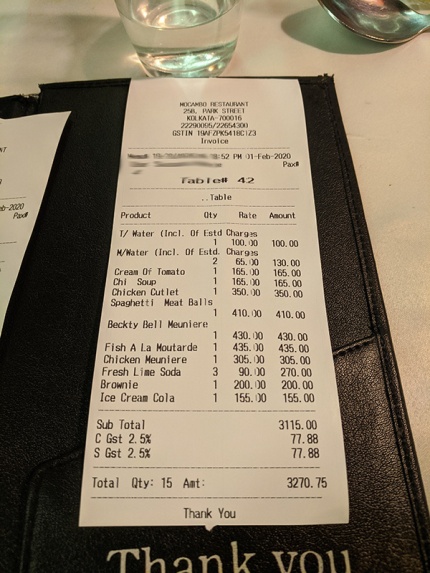 Because we were eating dinner very early by Indian standards (at 7 pm) we had no trouble getting a table (they don’t take reservations). By the time we left closer to 9 the place was heaving and there was a line outside. Service was friendly and on top of things throughout. Price? With tip just over $50, which is not bad for three adults and two kids and a whole lot of leftovers that went home with our friend.

I’m not sure when we’ll be in Cal next as a family but my guess is we’ll probably always do one Continental meal as an alternative to the hardcore Bong-a-thon at relatives’ homes. Next time though I do want to go to 6 Ballygunge Place and also to Tiretti Bazaar for Chinese street food.

Okay, one more report left from this trip: of eating chaat in Delhi, or rather in Gurgaon. Maybe next week. Before that I’ll have another report on takeout ramen in Minneapolis and probably another recipe.