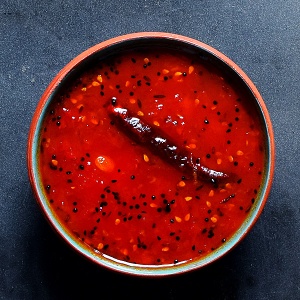 One of the signs, probably, of the tomato’s late entry and adoption in Indian foodways is that its name hasn’t changed much in some major Indian languages from the Spanish tomate and the English tomato. In Hindi, for example, the word is “tamatar”, pronounced “tuh-maa-tur”; and the English transliteration of the Bengali would be “tomato”, though pronounced “tom-ae-toh” (with hard t’s all around). Whereas in the Hindi belt in North India the tomato has been fully indigenized—it is a crucial ingredient in a number of iconic savoury dishes—in the east its incorporation is less complete, more belated. I think I’ve noted before that, as per my aunts, one of the marks of North Indian influence in my mother’s cooking is that she uses a lot more tomato in savoury dishes than is strictly traditional in Bengal. However, though the recipe for this dish which centers almost entirely on the tomato is from my mother, it is for a fairly traditional Bengali dish: tomator chatni. Tomatoes are used here though as a fruit rather than as a vegetable.

Though the Bengali “chatni” sounds like the Hindi “chutney” the two words connote very different classes of dishes. While chutneys are condiments or dips, in Bengali cuisine chatnis are a class of sweet-sour, syrup-based dishes that are not quite desserts; in a formal meal they’d come between the savoury courses and dessert proper. They’re usually made with fruit. I’ve posted a recipe previously for the classic chatni made with unripe mangoes. There are also chatnis made with pineapple and dates, to name only two. Tomator chatni (tomator=”of tomato”) is another and, as noted above, tomatoes too are used here as fruit. It’s a sweet-sour dish in the Bengali scheme of things but if you’re from a culture with a tooth not as ruinously sweet as that of us Bengalis you might find it plenty sweet anyway.

This recipe from my mother is unusually specific in terms of quantities. I suspect—though I cannot prove—that she came up with it at a time when I was pressing her for more specificity in the recipes she was sending me; and that these quantities are in fact only rough approximations of what she actually uses. I myself don’t really measure very carefully any more (my own recipes are more than a little fictional in this sense too) but I will give you the ingredients list as I received it from her back in 2004; the preparation steps are mine: my mother’s instructions are mostly in the “after a while, add…” vein.